OCBC Cycle 2019 Offers 6,800 Participants A Chance To Bond With Friends And Family At Annual Cycling Fiesta 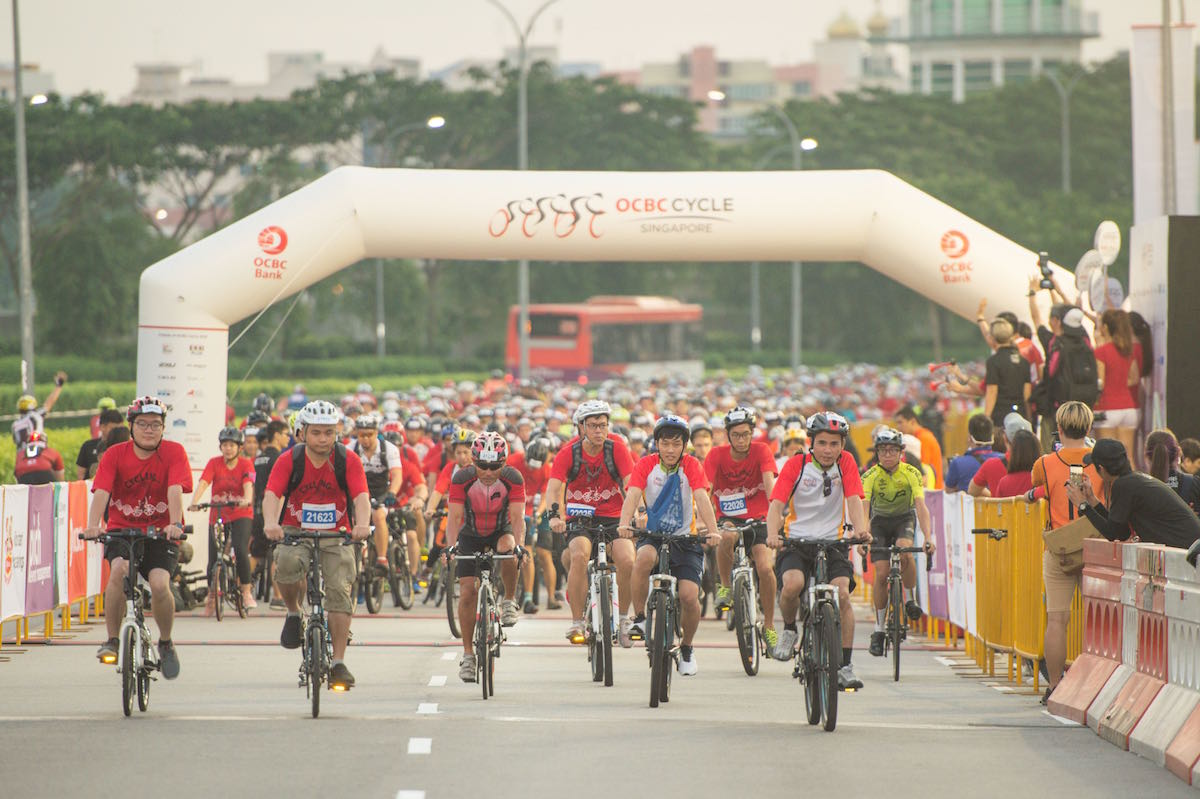 OCBC Cycle 2019 Offers 6,800 Participants A Chance To Bond With Friends And Family At Annual Cycling Fiesta

SINGAPORE, 12 May 2019 – Nearly 6,800 cyclists were out in full force at Nicoll Highway this morning for the 2019 OCBC Cycle’s The Straits Times Ride and The Sportive Ride. The event enters its eleventh edition and it is showing no signs of slowing down, with many participants taking part in more than one category.

Among the participants who registered in several categories over the weekend were husband and wife, Kaizad and Khushnam Badshaw, who highlighted the variety of choices provided by OCBC Cycle as a key attraction for them. Kaizad said, “Many cycling enthusiasts like myself look forward to this event every year because there are categories that cater to every type of cyclist, from the competitive to the casual riders. I was here with my kids, who are aged five and nine, on Saturday to watch them ride in the kids category, and today I am cycling with my wife in The Straits Times Ride. It is certainly a weekend well spent!”

Ms Fu said, “In its eleventh edition, the OCBC Cycle has given Singaporeans from all walks of life the opportunity to get active together. Besides growing the cycling community in Singapore, the event has also attracted many elite athletes from Southeast Asia. I hope that there will be more of such events to bring Singaporeans together through sport!”

The Business Times Corporate Rally a hit with participants

Corporate cyclists took part in the second instalment of the OCBC Cycle Corporate Chase. Along with the returning OCBC Cycle Speedway Corporate Championship, it is part of the newly formed umbrella category – The Business Times Corporate Rally. These races, split over two days, allow for corporate teams to choose from two formats, depending on their skills and proficiencies.

A total of 20 teams representing 16 companies took part over both days.

Building on the green efforts implemented during the previous edition, the OCBC Cycle 2019 introduced an expanded suite of initiatives. Most notably, the event will see one tree being planted for every 50 participants. Additionally, single-use plastics were not used for this year’s event packs, as participants received their event bibs in wood-free paper envelopes, and took home their event medals wrapped in tracing paper.

New friends join in the festivities at the community rides

Amongst the members of the vibrant cycling community present on Sunday morning were several new faces.

Just after the break of dawn, 10 youth riders from the Singapore Cycling Federation (SCF) Academy Programme participated at The Straits Times Ride.

The SCF Academy Programme was introduced in November last year to encourage more students to pick up cycling as an after-school school activity. With the support of Sport Singapore and OCBC Bank, the programme is also targeted at identifying talented individuals in the hope of nurturing them to become national-level cyclists.

One of the riders in the development programme for the national team, Teo Yun Khai, said, “For this year’s ride, I was pretty excited as there are more riders that I’ll be meeting and more challenges that I’ll be facing. I’ll see my improvement on my timing from my previous rides too. I’ve been training for one to two years, though, not exclusive for this event only. We’ll be back next year with a better timing!”

Reliving the action from day one of the OCBC Cycle 201

The OCBC Cycle Speedway Championships held on Saturday, 11 May, wowed the crowds with ferocious competitive cycling action and nail-biting finishes.

The largest-ever field of participants at the OCBC Cycle Speedway Southeast Asia Championship was not enough to deter the speedsters from the Philippines as they powered home in a time of 19:19.550. The best cycling talent of Southeast Asia was on display at Stadium Drive as perennial favourites Malaysia came in second with a time of 19:19.580, while surprise package Vietnam came in third at 19:20.483.

It was a stern battle of wits, power and speed at the OCBC Cycle Speedway Club Championship as defending champions Specialized Roval Mavericks narrowly beat out MatadorRACING and CyclingTraining.cc to earn their place as club champions. The Mavericks clocked a winning time of 17:49.390.

GlaxoSmithKline claimed their first win at the OCBC Cycle Speedway Corporate Championship, to earn the tag as the speediest corporate team in Singapore. The team won with a time of 19:48.457.

Children aged 2-12 and their families also did not miss out on the cycling action at Stadium Drive, as more than 300 kids participated in a bubble-filled spectacle during the Mighty Savers® Kids and Families Rides. Participants took the opportunity to capture picture-perfect family moments during the Rides, as endless curtains of bubbles permeated through the course.

More details on OCBC Cycle 2019 can be found on www.ocbccycle.com .