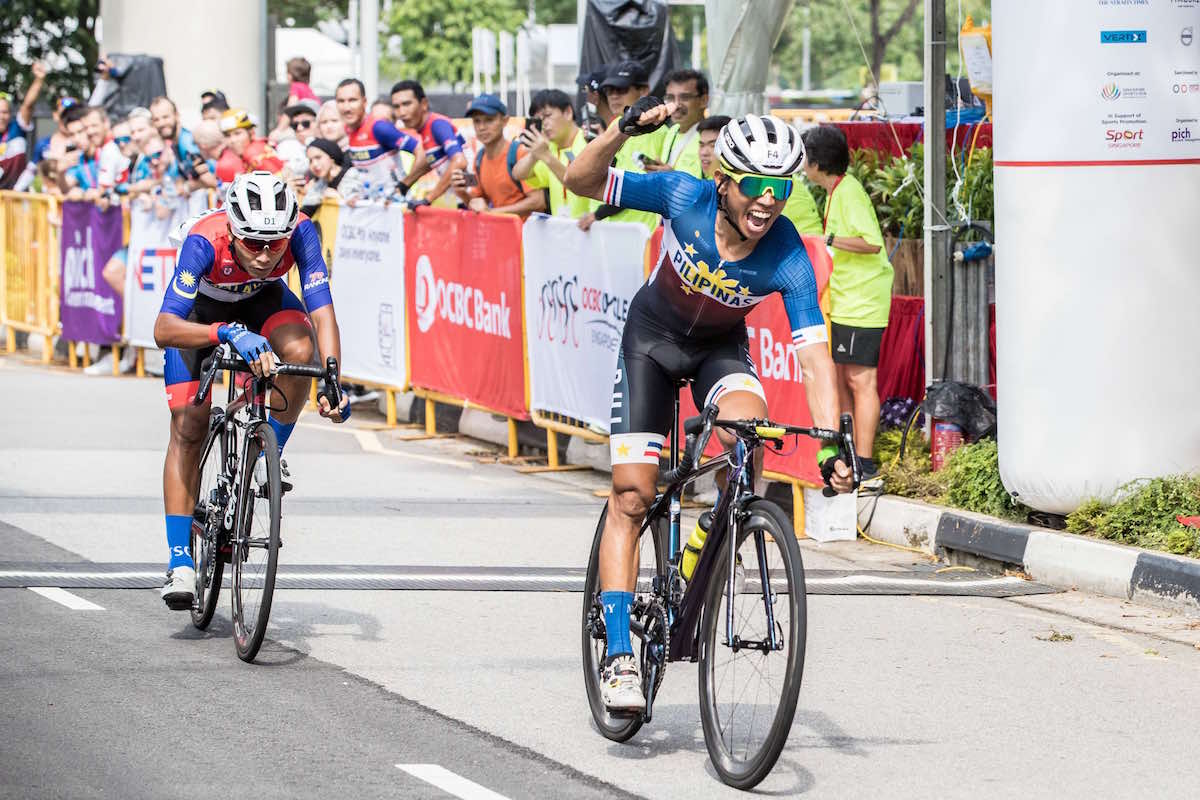 Singapore, 11 May 2019 – The cycling team from the Philippines rode a near-perfect race as they beat the strongest field to date at the 2019 OCBC Cycle Speedway Southeast Asia (SEA) Championship on Saturday morning.

Held at the Singapore Sports Hub, the fifth edition of the electrifying event welcomed Team Vietnam to the fray for the very first time, pushing the number of participating Southeast Asian teams to nine. This set the stage for an interesting battle between some of the region’s top cyclists, including the likes of Malaysian Nik Mohd Azwan, Filipino Jan Paul Morales and Vietnamese Trinh Duc Tam pitted against each other.

The popular OCBC Cycle Speedway Championships’ race format features teams of four cyclists each, riding a total of 10 laps in pairs around a flat one-kilometre course. Two cyclists ride five laps before handing over to their teammates for the remaining five laps. The times of all four riders is then averaged for the winning time.

Nail-biting finish sees the Philippines emerge winners ahead of Malaysia

This year’s final, contested by the teams from Thailand, Malaysia, Vietnam and the Philippines, witnessed an early frenzy as each team took turns at the front of the pack during the first laps.

After the mid-race changeover, the teams were still evenly matched as they battled for supremacy. Heading into the last lap, the teams pulled off the strategic move of letting their strongest sprinters go head-to-head against each other in what was a pulsating sprint finish.

The powerful sprinters from the Philippines proved too formidable as they edged out the competition, crossing the finish line at 19:19.550.

John Mier, captain of the Philippines, said, “I didn’t expect our team to win. The race was very close, and we had to ride slower due to the slippery road. Thankfully, we managed to overtake them in the last leg, as we put our fastest riders in the back. I’m happy that we won, as this year’s race was especially competitive.”

Early favourites Malaysia and surprise package Vietnam had proved their mettle in the qualifying rounds and semi-finals, breezing into the final with the best times. However, despite their best efforts, they were unable to carry that momentum in the championship race. Second placed team Malaysia clocked a time of 19:19.580, while team Vietnam came in third with a time of 19:20.483.

Mohamad Fauzan, captain of Malaysia, said: “Coming into the competition, we were confident that we could win the finals. We were leading in the first half of the final sprint and we could have led in the second half as well. We will be back next year with the same strategy. We trained every day before the fasting month, and it got a bit tiring during the fasting month. This year’s competition was tough, and we were very lucky, especially when the final round has all the favourites – Thailand, the Philippines, Vietnam, and Malaysia.”

Phan Hoang Thai, Vietnam captain, said, “I am very surprised with this year’s race. This is our first time participating and we gave our hundred percent. My team and I will be back next year to compete and win this race.”

The 2019 OCBC Cycle Speedway Club Championship also played host to an action-packed finale, as Specialized Roval Mavericks Team B managed to squeeze past their opponents in the final stretch to finish with an astounding time of 17:49.390.

Living up to their tag as the best cycling team in Singapore, the defending champions successfully held off a spirited challenge from Matador Racing and debutantes CyclingTraining.cc who finished second (17:49.440) and third (17:49.847) respectively.

Benjamin Arnott, Specialized Roval Mavericks Team B captain, said: “We’re very happy to be defending our title this year. Each round was completely different so we had to think on our feet and adapt our strategy for each round. We were very lucky to have two of our teams in the finals so we could work together to create a gap for one of our riders to take the lead. It actually came down to the final sprint, so we relied on our two final sprinters to get the best pace they could.”

He added, “The rain was definitely a challenge. You have to ride in a different way when its wet compared to when its dry. We were a lot more conservative going into the corners, and a lot more careful of the other riders around us.”

Michael Naert of MatadorRACING, said: “I am pretty satisfied with the team’s performance today. We finished second, just behind the leaders by a few hundredths of a second.”

It was a day of firsts at the OCBC Cycle Speedway Club Championship, as two all-female cycling teams, Fahrenheit Performance Development Team and ANZA Cycling Women’s Team, participated in the traditionally male-dominant competition for the first time ever. Both teams were drawn into the same qualifying group, and finished with decent timings. However, they were not quick enough to beat the teams in their group.

The speedsters from GlaxoSmithKline (GSK) cycling team executed an excellent strategy to launch a powerful sprint in the final lap, winning the 2019 OCBC Cycle Speedway Corporate Championship earlier this morning.

Nothing could separate the teams from the start to the mid-point of the race, as riders from different teams took turns to lead the peloton. With the wave of the flag signalling the last lap of the race, Thomas Thrall of GSK put on the boosters and led the sprint down to the finish line.

Alastair Reed of GSK capped off a sterling performance in the final, as he stopped the clocks with a time of 19:48.457. This win is their first in the corporate categories, marking an improvement from previous years. They finished second at the inaugural Speedway Corporate Championship in 2017. In 2018, they were third in the Corporate Chase, which is part of The Sportive Ride.

Delighted team captain Alastair Reed expressed surprise and joy after seeing the team’s two-month training pay off. He said, “We did not expect today’s win! The competition was strong and we are very humble to have won today. The team trained for over two months, and this year, we have two new skilful and experienced riders with us. Our strategy this year was to place our fastest rider at the end and thankfully, this paid off. We’re very happy to be donating our prize money to our corporate charity – Save the Children.”

GSK bested favourites Singapore Civil Defence Force and Lendlease Retail, who were widely expected to finish in the top two as they entered the final with the best semi-final times. Lendlease Retail narrowly missed out on the top spot, finishing in second place with a time of 19:48.960. Advanced Micro Devices Singapore took third place on the podium with a finishing time of 19:50.090.

Richard Paine, Landlease Retail captain, said, “This is our first time competing in the OCBC Cycle Speedway Corporate Championship. We thought it would be a good opportunity to get together and do something fun outside of the workplace. Having represented my club in the OCBC Cycle Speedway Club Championship before, I knew what to expect today but it was a great new experience for the rest of the team. We’ll definitely be training more next year!”

Corporate teams of four participants each will race to complete The Sportive Ride in the best total time. The OCBC Cycle Speedway Corporate Championship as well as the OCBC Cycle Corporate Chase are under a new umbrella category, The Business Times Corporate Rally.

More details on OCBC Cycle 2019 can be found on www.ocbccycle.com .