Part 1 of 2: This South Korean lady has been travelling around the world on her bicycle for 7 years. Who is she? 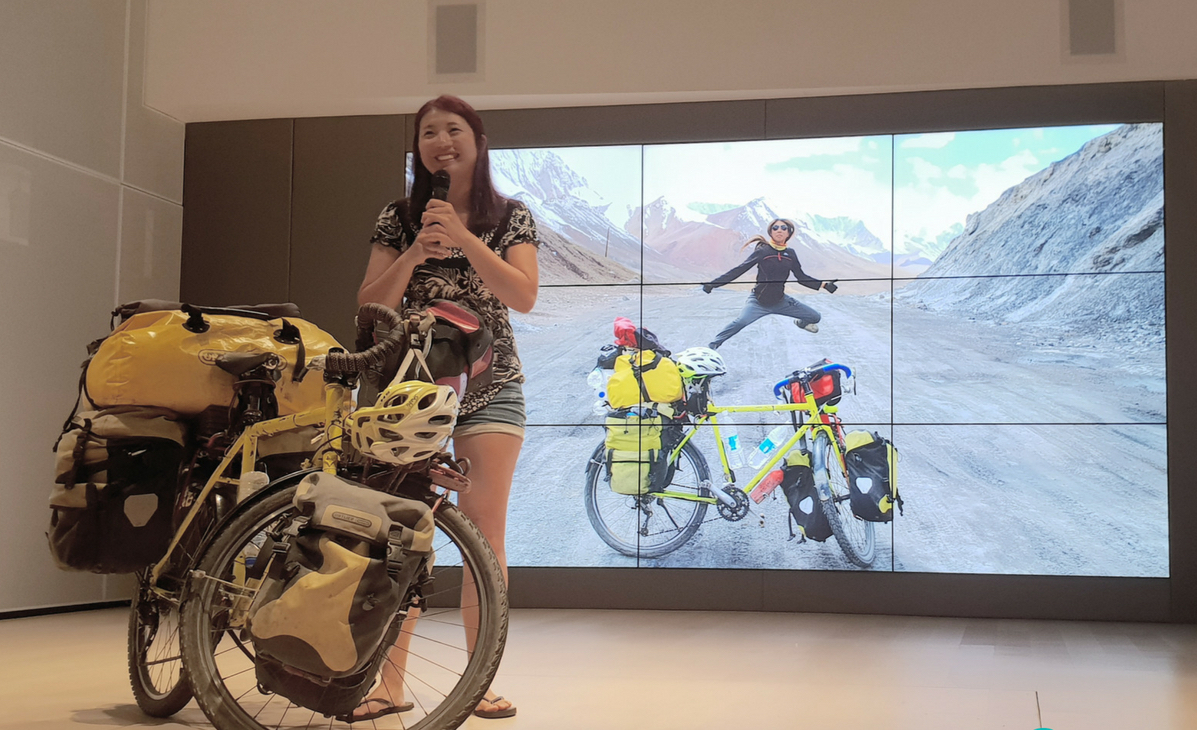 Part 1 of 2: This South Korean lady has been travelling around the world on her bicycle for 7 years. Who is she?

Esther Koh
comments off
23637 Views
0 Likes
On 25th August 2018, more than a hundred people gathered at Shimano Cycling World on a scorching afternoon, eager to hear about this lady’s amazing story.
She is none other than Jin Jeong, a 31-year-old South Korean lady who has been travelling around the world on her bicycle for the last seven years. She began her adventure from North America in September 2011, and since then, she has cycled in North and South America, Africa, Europe, and Asia, covering more than 70 countries and a total distance of 66,600km (updated 17 August 2018).

“I am curious to see the world. I love traveling. I love to be with people. I like to learn their culture. Car is too fast, and walking is too slow. So cycling is good speed.”

Jin’s journey started in San Francisco, USA. That was where she bought her bicycle (she did not own one prior to her trip) and all the equipment she needed, amounting to US$2,500 in total. She volunteered at a local bicycle shop to equip herself with bike maintenance skills.

Jin had a rough start and faced many challenges along the way; losing her belongings, battling with hilly terrain and fatigue, facing the consequences of a lack of preparation and food etc. There were days when she was emotional and broke down crying in her tent. She continued anyway.

Here is her mini summary of each continent that she has travelled to. She feels that the world is so small and wishes that there are more continents on Earth for her to explore.  She also refused to believe media portrayal of some countries; she wanted to see the world with her own eyes.

Central America was the scariest place for Jin. She spent one year and four months cycling there. After cycling in South America, she decided to continue her journey in South Africa and up along the Eastern region of Africa. She avoided the Western and Central areas of Africa as those countries have a lot of mosquitoes, and the risk of contracting Malaria is very high.. In Africa, she has gotten many stares and flirtatious remarks by the local men.

Said Jin, “Oh Europe is so easy. If you want a safe environment to cycle in without all the racism and flirting, Europe is the place to go.” She even braved the cold and pedalled to Finland during the winter in hopes of seeing the Northern Lights.

Central Asia is a mountainous region and she passed by many cycle tourists there. It was also her first time where she had to drink from the river as the place was too remote.

“Iran is a popular country for cyclists because people are nice and kind. However, I would not recommend it to solo female cyclists as I have faced many accounts of sexual harassment there.” China is the longest distance she has ever cycled in 1 country; 6000km to be exact.

“South East Asia is so hot, it makes me lazy haha.”

After spending about 2 weeks Singapore, Jin will be heading to Batam, Indonesia and Sabah, Malaysia before continuing her journey in the land down under; Australia and New Zealand. She wishes that she can cycle in North Korea too if the Korean governments permit her to do so.

3 things that still scare her

Even though Jin has been on the road for seven years, there are three things that she is still fearful of. Even the harshest of weathers do not bother her as much.

She met with her first car accident while in the USA. She could not manoeuvre a roundabout successfully due to the weight of her bicycle and collided with a car. Thankfully, she has yet to sustain any serious injuries, just minor bruises.

Like most of us, Jin got annoyed and scared when vehicles came to close to her. “When I was on my way here to meet you guys, there was a bus that came so close to me!”

As an Asian woman travelling alone, Jin has faced countless racist and sexist attacks both verbally and physically. Being touched at inappropriate places, passers-by making kissing sounds, calling her “hey baby/ hey sweetie” etc. To protect herself, she would show fingers, or shout for them to back off.

After every time she was harassed, she would cry because it hurts her soul. Every episode would take her a few days to pick herself up again.

#3. Possibility of getting raped

“You will never know what happens at night when you are alone.”

Jin is afraid to wild camp outdoors by herself. She calls herself a ‘chicken’ because even after all these years, she still prefers to stay at places where there are people.

To combat this fear, she tries to find places where she can be around people, and if she is left with no other choice, she will find a spot where she will not be spotted easily. She has slept at police stations, gas stations, fire stations, hostels or affordable hotels, peoples’ houses, and empty houses. Everywhere you can think of basically.

“What I learnt from my trip is that if you want to do something, understand that there will be fear, and go with your fear to reach your goal. The biggest achievement will come after you conquered your fear, overcame the hurdles and pushed through your struggles. You don’t focus on the fear, but keep reminding yourself why you want to do it.”

These are just some of the struggles she faced while on the road, but it did not stop her from continuing her journey. Because she feels that there are many more things to enjoy. Her curiosity to see the world drives her to keep moving forward.

Does Jin’s journey inspire you to want to cycle and explore the world as well?

Click here to read the 2nd part of the article: What’s in Jin’s bags?

Thousands of people are following her journey on social media, and you should too!
Facebook: Cycling Around The World
Instagram: @universewithme

Here is a video of her journey that she posted back in May 2017. SportsIn Cycling wishes her all the best and safe travels ahead.