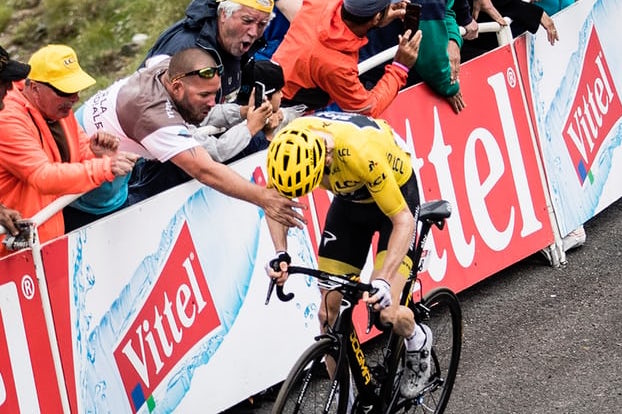 Amidst a general feeling of suspicion surrounding Sky and their sheer domination of the Tour de France, the four-times winner Chris Froome has been cuffed by one fan, spat at by another, and had an unidentified substance thrown at him. He was the subject of an investigation into why a sample from his 2017 Tour of Spain victory revealed twice the permitted amount of the asthma drug salbutamol. Froome was still allowed to race after the UCI dropped its case against him.
Geraint Thomas, the current leader of the Tour, has been booed off the podium and some of Sky’s staff have also faced abuse. 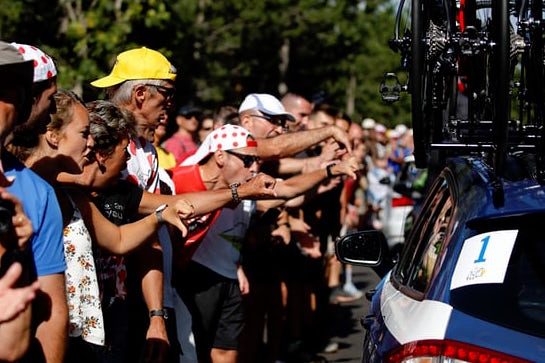 2. Being grabbed by “supporters”

Geraint Thomas from Team Sky was grabbed by a spectator while riding close to the crowds. This happened towards the end of the climb up the Col de Portet during stage 17 and it nearly caused him to crash.

In the earlier stages, Vincenzo Nibali was forced out of the tour after the Italian rider crashed and fractured his back when spectators got in the way on stage 12. It happened when he rode through a throng of hyper-excited fans. It was unclear what caused him to crash; a video which emerged suggested a bag strap, flag or arm got in his way.

For safety’s sake, should there be a physical limit set by UCI of how close spectators should be from the cyclists?

Stage 16 was being neutralised after several cyclists were temporarily blinded by pepper spray.

The gendarmes used pepper spray to stop protestors as they threw bales of hay across the road in an attempt to disrupt the stage. However, the pepper spray appeared to drift into the face of several cyclists as they rode past, forcing the general director of the Tour to pause the stage.

After a 15-minute interval, the race resumed with a short neutralised section before the flag was dropped once more with 33km of the 218km distance covered.

4. Getting stopped by the police

Chris Froome from Team Sky took a tumble off the bike when he was brought down by a gendarme as he made his way back to the Team Sky bus after the stage. Apparently the gendarme mistook him for a spectator.

With no space to park the team buses at the top of the summit finish of the Col du Portet, riders had to turn around at the finish and descend back down the way they had climbed in order to reach the buses midway down the mountain.

But Froome clarified with the media, saying, “Obviously he thought I was a spectator going down the race route. I was going at some speed so I came off obviously, but it was just a misunderstanding.”

Do you think that more safety measures and regulations should be put in place to ensure the safety of the riders during the Tour?

Any WTF?! that we might have missed during the Tour? Let us know in the comments!