Tour Down Under: Viviani emerges as winner in Stage 3 at Victor Harbor 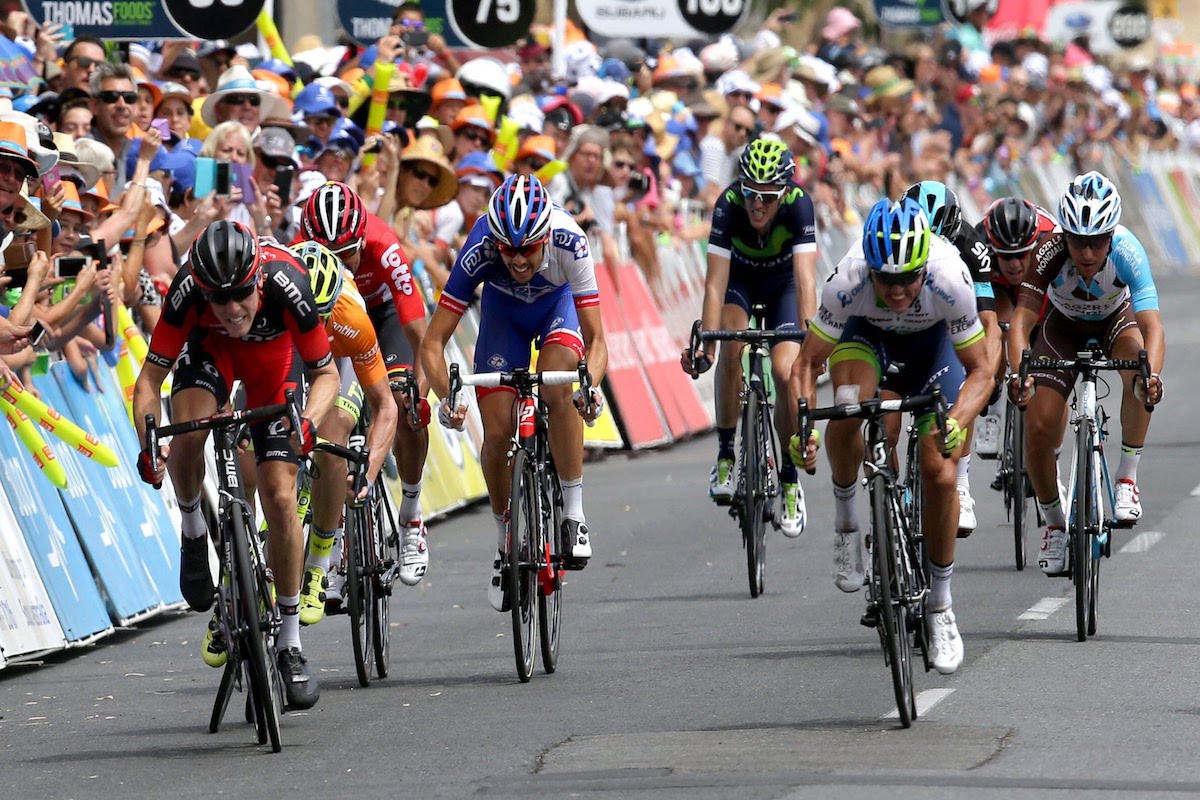 Tour Down Under: Viviani emerges as winner in Stage 3 at Victor Harbor

Caleb Ewan’s Australia team took lead in the final kilometers of the Tour Down Under in Victor Harbor in South Australia, but as he was closing in the last 200 meters, Italia Elia Viviani sailed past for the win. Phil Bauhaus of Germany finished at second place.

The win is the first for Viviani in 2018 and his first for Quick-Step when he switched to the Belgian from Team Sky during the off-season.

“It’s the fourth sprint we do, and it’s not easy to come in January in good condition, so I think I never win in the early season like that,” Viviani said. “That’s a good thing. I feel really, really lucky to be here and to take this win. I just tried to be in good position. The guys did another perfect job. The feeling was good with the team. I have an amazing team. I really thank all of my mates.” Viviani said after the stage.  When asked how he beat the heat, which surpassed over 40 degrees, the Italian said he did it by staying hydrated by drinking as much as possible for the finale.

Tour Down Under: Caleb Ewan says it’s his mistake that made him lose

Viviani should also say thanks to Ewan, who took responsibility for his bad performance despite his teammates helped him set him so well.

Commentators said Ewan noticed a gap between himself and his lead-out man Alexander Edmondson. So, he eased up to the Italian to surpass him and win the competition.

However, Ewan disagreed and admitted that it was just a simple mistake because he started his sprint late.

“I’m pretty disappointed actually. My team gave me an absolutely perfect lead-out, but I really stuffed it up the end”, Ewan said.

“It was a bit of a headwind and I didn’t want to go too early. I waited a little bit too long, and Elia got the jump on me. He was too quick to bring him back”, Ewan admits. “I think in hindsight with that finish you are better off coming from behind as I did last year. But like I said, I cannot fault my team. They were absolutely perfect. They did exactly what I asked them to do, and it was my stuff up in the end.”

The Tour Down Under’s winning post from Glenelg to Victor Harbor is said to be 146 kilometers long, which includes three 13 kilometers circuits surrounding Victor Harbor.  But organizers decided to shorten the race to 120.5 kilometers citing forecasts of high temperatures.They did it by excluding two circuit laps.

Familiar riders KOM leader Nicholas Dlamini (RSA – Dimension Data) and Scott Bowden (Aus – UniSA-Australia) both made it to the third consecutive day.  Dlamini secured maximum points on the first KOM 38 kilometers into the day but lost the pace with more than 50 kilometers to ride.

Meanwhile, Bowden took top points during intermediate sprints at 61.6 kilometers and 88.3 kilometers. This left the GC contenders scuffling for the remaining bonus seconds. The Aussie’s day off the front came to an end just little over 20 kilometers to go.

With most of the contenders out, the race was refocused at the front, and Tiago Machado (Katusha-Alpecin) took advantage of it and sped away.

The Portuguese rider received some attention from spectators as he created a gap of 17 seconds over the coming kilometers. But he was soon brought down by the sprinters’ teams with 8 kilometers to go.

The fight for the crown intensified after that, with Daryl Impey (RSA – Mitchelton-Scott), eventually taking control and got close to Ewan, only to be discontented later.