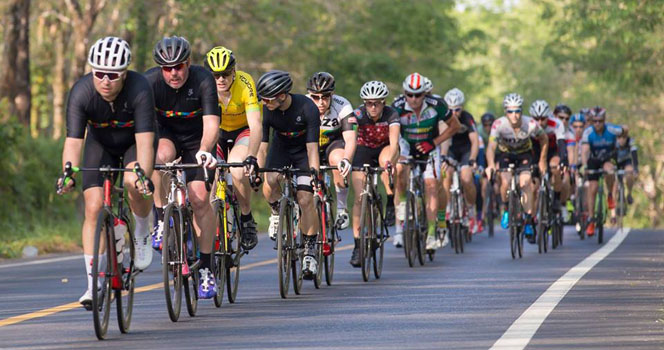 The 2019 Singha Tour of Phuket promises to deliver even more and set the benchmark for amateur racing in Asia. That’s the word from event organiser Cycosports, who have been running the 3 stage tour for the past four years.

The tour is the first in the South East Asia calendar, running from 2 pm on Friday, 8th March to 2 pm on Sunday, 10th March.

“The way the tour is set up allows riders to take the Friday off work and enjoy a fantastic three days of racing in scenic Phuket and the Phang Nga mainland,” says Scott Bales, a rider team CycleTrainingAsia.cc

This year’s race delivers many enhancements to the now popular season opener. The first and most obvious is the new title sponsor Singha.

“It’s great to have Singha onboard. They are very supportive of cycling and racing in Thailand. Being the title sponsor for a regional tour which attracts a broad range of cyclists from around the region is kudos to Singha” -Kent McCallum, Event Director at Cycosports.

There is also talk of the tour being sanctioned and supported by the relevant cycling federations of Thailand and Singapore. As Cycosports is a Singapore based company, this year they are working with Nich Events from Thailand to broaden the appeal of the event to the local Thai racing community and to provide greater rider support during the racing.

As with previous years, the Singha Tour of Phuket does not rely on one “official” tour hotel. Instead, it utilises a number of great properties to suit a rider’s budget, style and family, if they are coming.

In 2019 the Singha Tour of Phuket will have a recycle / reuse policy on tour. This means that bidons will be supplied from Camelback will be recycled after each day. In selected locations, there will be “single-use” water bottles, but these will have dedicated drop points to collect and ensure the empties are recycled.

Within the Singha Tour of Phuket, there is an array of race categories including Elite (Open), Masters, Supermasters and Veterans. Women can compete in the Women’s Elite as well as the competitive “Race” Gran Fondo. Popular among the more relaxed riders is the two-day Gran Fondo option.

Day 1 – The tour kicks off at the Phuket Gateway at 2 pm on Friday 8th March with the Individual Time Trial (ITT). The ITT is a short, snappy 5km course on a purpose-built cycle track. It’s smooth and fast but comes with a kicker – a sea breeze that hits the riders and punishes those who go too fast too early.

“The Phuket Gateway makes a great venue for the ITT – it’s a place where all the teams can see the action, get a gauge of who’s on form and catch up with old friends and foes – with a Singha Beer if they so desire” says Ekapak Nirapathpongporn, a Thai who resides in Hong Kong.

Day 2 – Saturday 9th March starts at 7:30 am on the Phang Nga mainland, a 5-minute ride across the Sarisin Bridge. The start has changed from previous years to allow for a more “village feel” for the start and finish which is now located at the local school’s football field.

“It’s nice we have been allowed to use the fields. It gives the community an opportunity to give back to the local kids at the school. We will be asking riders to donate their old sneakers and sports gear for the kids – another example of recycling and reusing in action.” says May Swales, event liaison manager for Cycosports.

Saturday’s racing action will see the fully supported pelotons heading north following the beautiful sandy beaches of the west coast, before heading inland to the first KOM area, a set of hills that will test the riders relatively early in the proceedings.
After the KOM loop, the riders then head south through lush jungles and rubber plantations with streams and small lakes, before coming back to reality with the second KOM of the day. They will then join the main road back to Phuket island, before dropping down into smaller roads for the race to the finish and a well-deserved Singha Beer or water at the football field during prize giving.

Saturday afternoon will give riders a chance to relax, many of which will be bringing their families along. The team is planning the ‘Singha Sundowner’, an informal gathering on Saturday Afternoon (location to be advised). It will be a time for a Singha beer or two and to relive the action with fellow riders and teammates.

Day 3 – Sunday, the final day of racing, will commence again at the football fields, with a very scenic and panoramic loop of Phang Nga Bay. The “not so serious” riders, like those doing the Gran Fondo, can take some time to appreciate the many limestone pinnacles rising from the sea, including the famous James Bond Island. For those at the sharp end of racing, day 3 has an additional half loop which tests the riders by going over the KOM from both directions before heading to the same finish location as Day 2.

Looking back over the past three years of the Tour of Phuket, the time gaps between the top 10 riders are always tight. It is a course which is challenging but keeps it competitive right to the last 100m.

Once the wheels have stopped spinning, Stage 3 and the final tour prize giving will be held at the football field. Again, Singha Beer will be on hand to deliver cold beers and water before riders say goodbye to a fabulous weekend in Phuket.

So in summary, if you are looking for a great weekend away, sunny Phuket with its beautiful beaches delicious food, warm hospitality and exciting racing (and gran fondo cycling), is just the ticket!