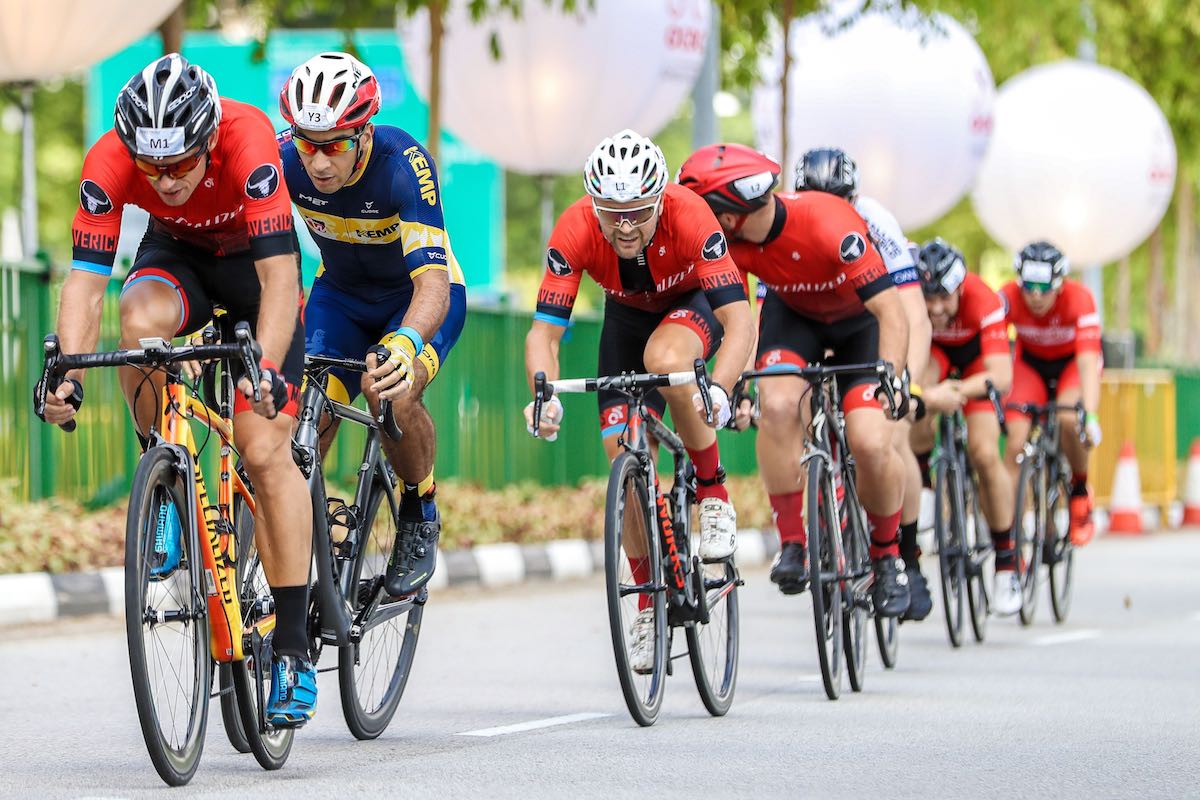 Thousands of cyclists attended this year’s OCBC Cycle. The two-day event garnered tremendous support throughout the various competitive and non-competitive races. Save to say, it was a fun-filled weekend full of spinning wheels and triumphant smiles.

The 2018 OCBC Cycle Speedway Southeast Asia (SEA) Championship bore witness to plenty of drama and suspense, as the budding cyclists from Team Myanmar emerged victorious in a talent-packed final.

Despite finishing behind the more highly-favoured teams from the Philippines, Thailand, and Singapore, Myanmar’s cyclists rode an inch-perfect race and climbed to the top of the final standings after the other teams were penalised for infringements at the changeover.

During the final, the breakaway riders from renowned regional sprinters Thailand and the Philippines exchanged early attacks, with Singapore managing to stay close behind. After launching into the sprints at breakneck speed, the lead riders of Thailand, Philippines and Singapore managed to stretch their lead by more than half a lap, as riders from the chasing pack executed a patient game plan with one another.

The plucky riders from Myanmar managed to stay within sight of the chasing pack but were unable to mount a serious challenge on the front three. However, the changeover saw a flurry of activity and the riders from the Philippines, Thailand and Singapore were adjudged to have made infringements during their dismount and mounting of their bicycles. This resulted in a 10-second penalty for both the Philippines and Thailand teams, while Singapore was given a 20-second penalty for two transgressions.

Myanmar finished closely behind the other three teams with a timing of 20:40.317, good enough to overhaul the first finisher Philippines’ pre-penalty finishing time of 20:39.680 to earn their maiden OCBC Cycle Speedway SEA Championship title with a flawless ride.

Mr Aung Myo Naing, team manager and coach of Myanmar, expressed his happiness at the unexpected win: “It is an amazing feeling to have won our first title. We did not expect to win today as the other teams have better sprinters than us, but thankfully we had a clean changeover in the transit area. Every year we try to get better, and we have been training for three months for this. Our previous best result was a 4th place finish in 2015.”

Despite the disappointing turn of events, anchor cyclist Calvin Sim was encouraged by Team Singapore’s performance, stating: “Overall, I think we did the best we could and we showed that Singapore can be up there with the Southeast Asian nations. We will go back and see what we can improve and aim for the top spot next year.”

After a shock second-place finish at last year’s edition of the OCBC Cycle Speedway Club Championship, the Specialized Roval Mavericks Team 1 made sure to put in a dominant display to reclaim their throne as the best cycling club in Singapore.

In a tremendous display of athleticism, the lead rider of the Mavericks Team 1 established an unassailable early lead after the changeover. Never breaking his stride, the rider eased over the finish line.

However, it was up to the anchor rider of the Mavericks Team 1 to stay close to the peloton or chasing pack, before launching into a sprint in the final laps. This proved to be difficult as the riders of Allied World Kemp Technologies and MatadorRACING weaved in and out on the circuit, each taking turns to lead. It was a treat for the bellowing crowd as the riders from all three teams finished so close to one another that fans had to eagerly wait for the official results.

In a result fitting of the performance, the Mavericks stopped the clocks at 18:12.793, narrowly edging out Allied World and Matador. Team Anza and Specialized Roval Mavericks Team 2 finished fourth and fifth respectively in the final.

Bastian Dohling of Specialized Mavericks Team 1, said: “It feels terrific to win this year’s OCBC Cycle Speedway Club Championship, especially having trained intensively for the past year. We’ve been riding every two weeks leading up to today’s race and had two Mavericks teams in the finals, which put the club in a great position. Despite coming in first, we did make some mistakes in our transitions this time around, so we have more improvements to work on. We hope to finish even stronger next year!”

He added: “What really took us through today’s race was teamwork, not just between the four of us but the squad as a whole. We’ve already identified some areas of improvement, and the road to next year’s OCBC Cycle Speedway Club Championship starts tomorrow!”

In the new OCBC Cycle Corporate Chase, a total of 23 teams from 18 companies vied for the top cash prize of $400 and the coveted Champions’ Jersey.

With the teams lined up at for the first wave of The Sportive Ride, the race format saw each team of four cyclists completing the 40.8km route to clock a combined net time, with the fastest team being crowned the inaugural champions.

The Singapore Civil Defence Force (SCDF) Team B rode to an easy victory as their combined net time of 4:04:19.370 was more than 10 minutes faster than their nearest competitor. Advanced Micro Devices (4:14:56.240) and GlaxoSmithKline (4:20:35.270) finished in second and third place respectively.

Mr Mohammed Harith of the SCDF cycling team, said: “It feels awesome for our team to have finished first in the OCBC Cycle Corporate Chase. We have been preparing for a few months prior to this ride, and all the hard work during the morning and night training have finally paid off.”

“Everything went as planned during the ride and we are just happy to be able to finish well. It is also an absolutely surreal experience to get to ride on highways and roads that are not usually open for cyclists.”

On the second day, a total of 6,500 cyclists took to the roads for The Straits Times ride (23km) and The Sportive Ride (40.8km), starting their rides on the Nicoll Highway and ending inside the iconic National Stadium.

One cyclist who expertly navigated the 40.8km The Sportive Ride on a Mobike, Ms Honey Abangan, said: “It is my first time participating in OCBC Cycle with my company. As the Mobike is such a convenient option for my colleagues and I who don’t own a bicycle, it made the decision to participate much easier for us. It has been a wonderful experience so far, and I am definitely coming back next year!”