Bikepack in S.Korea with the 4 Rivers Passbook: 633km from Incheon to Busan 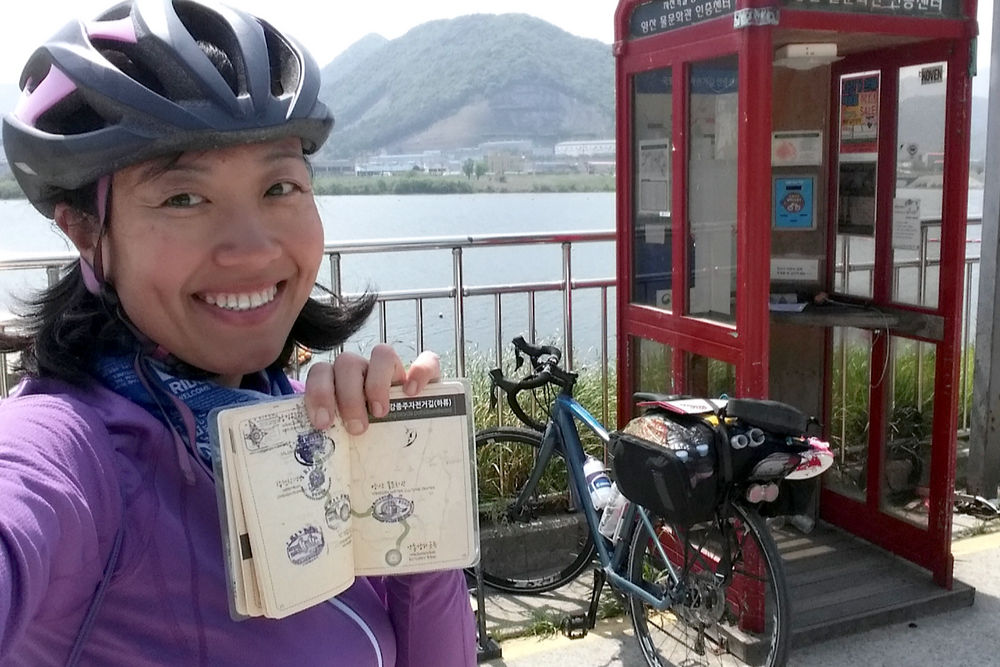 Bikepack in S.Korea with the 4 Rivers Passbook: 633km from Incheon to Busan

South Korea has always been well known for its romantic Korean drama series and worldwide popular K-pop music and idols. However, it is a lesser well-known secret that South Korea is one of the best countries in the world to explore by bicycle. I was curious to find out about cycling in South Korea when I got to know by chance that a well-designed network of cross-country bike path spanned the length of the country.

It connects coastlines and various scenic or challenging segments passing parks and along rivers, quiet country trails, and small roads. While most of the paths, barring mountain passes and remote areas, are car-free, this has to be one of the cycling bucket lists that you should make South Korea as your next cycling destination! 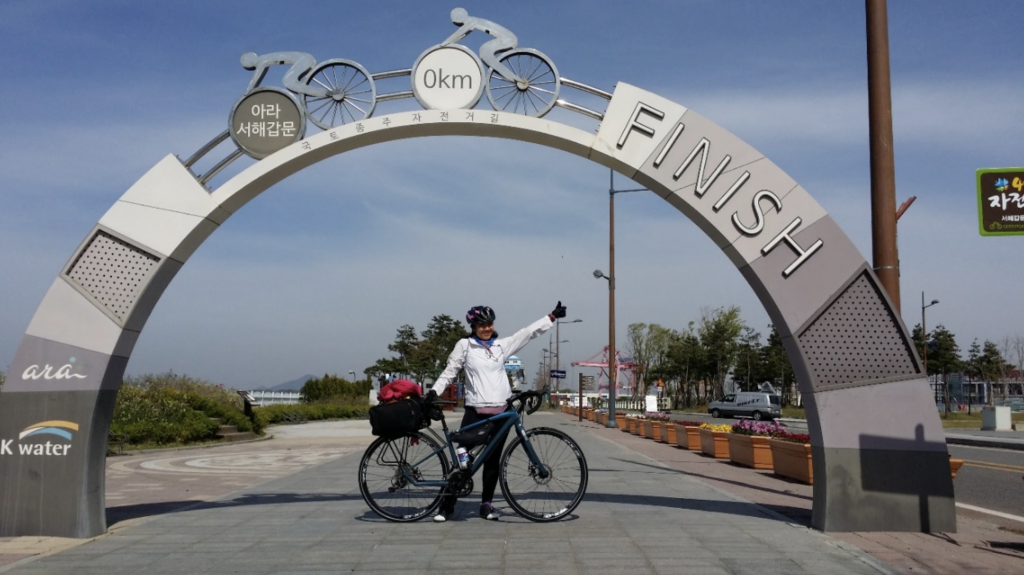 Here is a guide on the Four Rivers Trail that I did in April 2017 and things to take note about the country and some travelling tips.

This has to be voted as one of the best bike paths in the world with a dedicated cycling path made just for bikes! Ranging from easy to challenging trails, the 4-Rivers Bike Path runs from the north-west corner of South Korea to the south-east corner spanning more than 600 km. While cycling the 4-Rivers Paths, a must-see attraction is the Sangiu Bicycle Museum that covers the history, culture, and technology of the bicycle extensively. However, most of the language is in Korean. Still, the exhibits are interactive enough to understand the main points and have a good time there!

Cycling Route: You can start riding from either Incheon or Seoul in the north by following the cycling path down to Busan in the south.

Cycling Path Condition: Most of the cycling paths consist of uphill and downhill slopes although the 4-rivers cycling path is mostly a flat cycling route which will not be too demanding in terms of altitude. However, the only difficulty comes with the duration of the trip to complete the entire ride.

The 4-Rivers Passbook is a unique cycle passport booklet meant for this cycling trail. The cycling path consists of red booths along the way so you can get the booklet stamped to complete your cycling journey. Once you’ve finished it, you can present the booklet to get a medal and certificate of completion at the certification centre in Incheon or Busan. 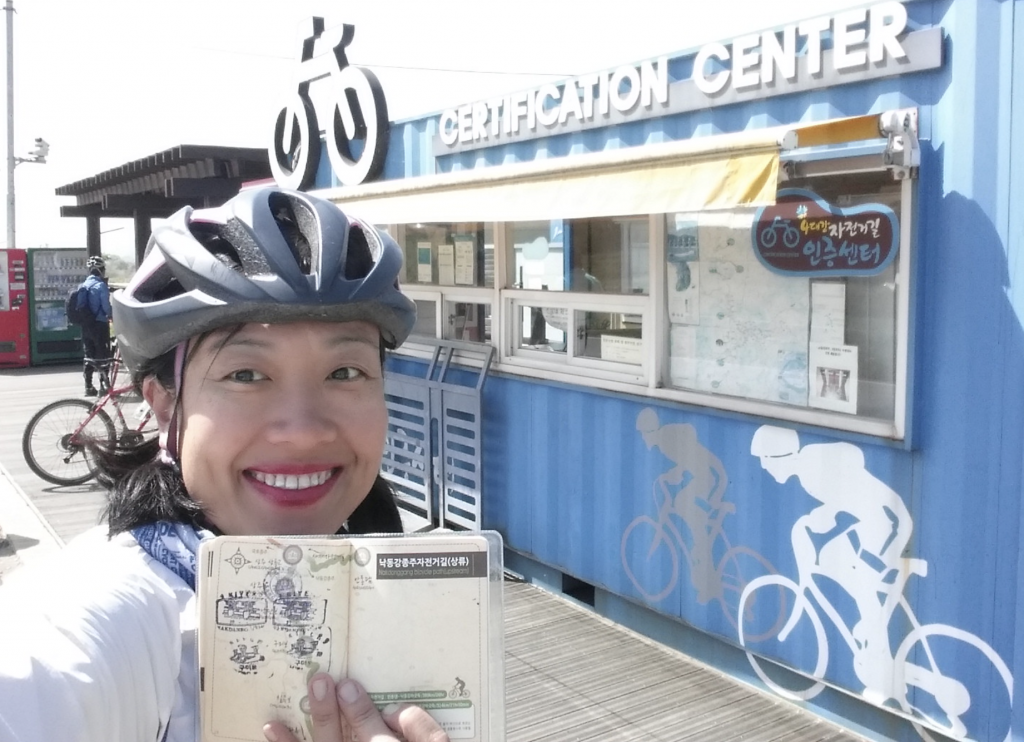 The Springtime is a beautiful sight to see cherry blossoms anywhere in South Korea. As you ride along Hangang River, be mesmerized by the pinky cherry blossom floral trail and enjoy the fairly leisurely cycling path that leads to the 24 bridges on the river, and the beautiful skyline of high-rise buildings along the river. The cycling route is also connected to Cheonggyecheon Stream, the four major royal palaces, Yeouido, Olympic Park, and other major tourist attractions in Seoul. 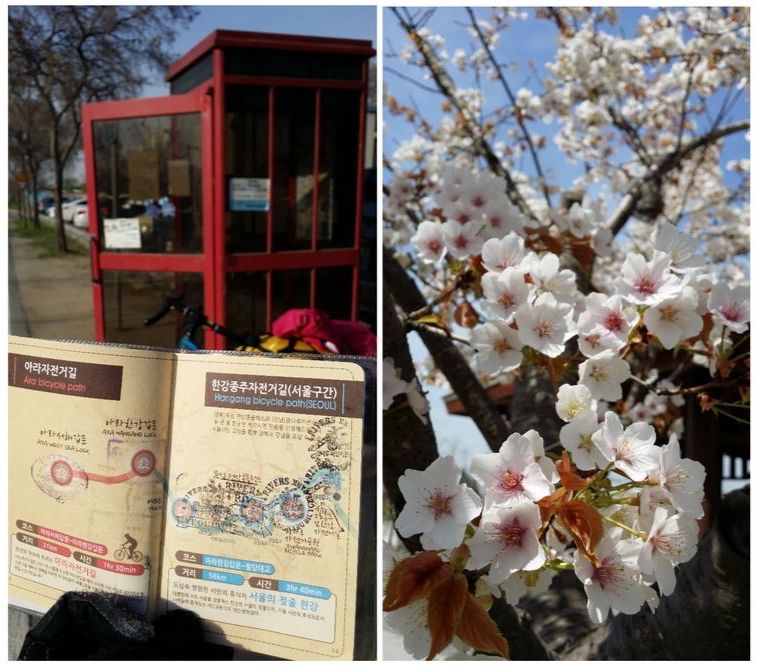 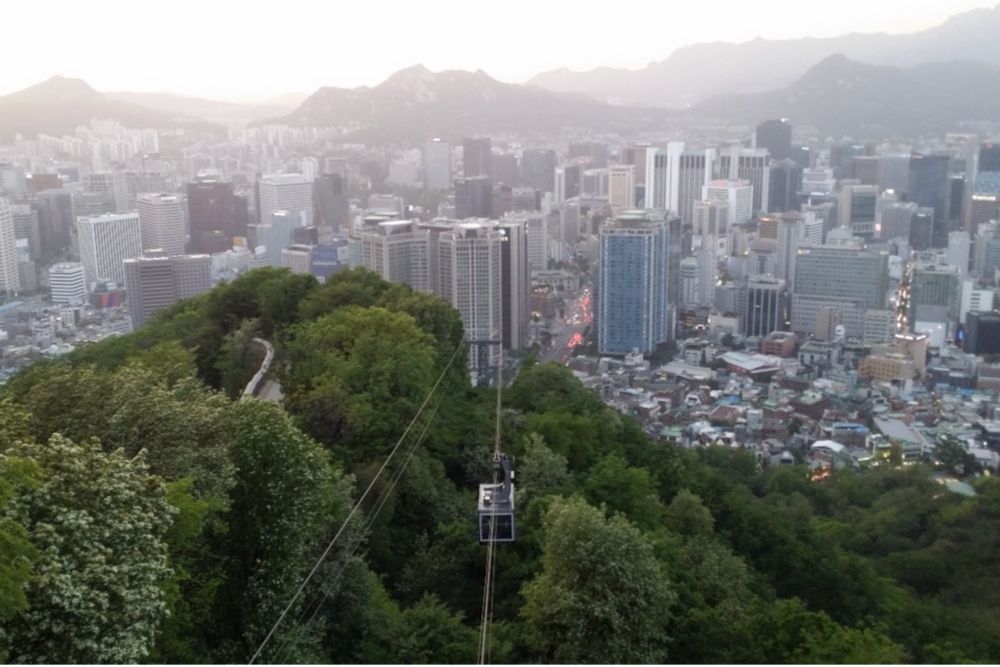 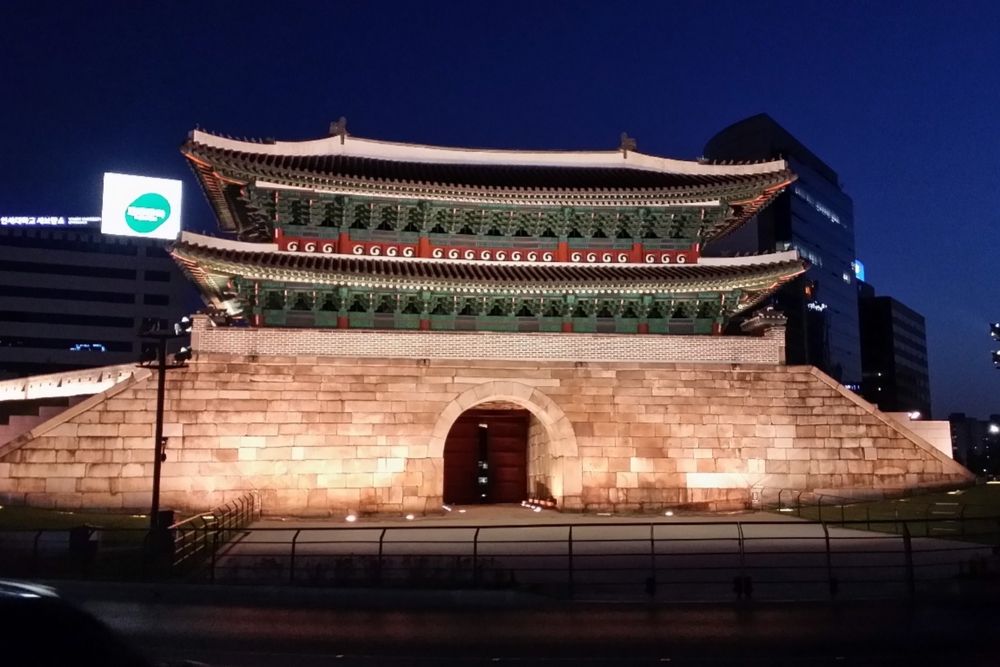 As you ride past the Hangang River, the Paldangdaegyo Bridge marks the start route along the Namhangang River. Along this 132 kilometre-long route, the beautiful bike path extends through Namyangju, Yangpyeong, Yeoju, Wonju, and Chungju, before ending at Tangeumdae Terrace & Park in Chungju. You may think you are have travelled back to the past as you see the ancient-style ferry cruising through Dumulmeori graciously where the Bukhangang River and the Namhangang River meet as well as passing by historical sites like the site of Jeong Yak-Yong. The cement-paved route also passes by three weirs constructed as part of a government project—Ipobo, Yeojubo, and Gangcheonbo—and runs along a railway. You will also pass by a tunnel, the riverside, a closed train station, and the Bukhangang iron bridge. 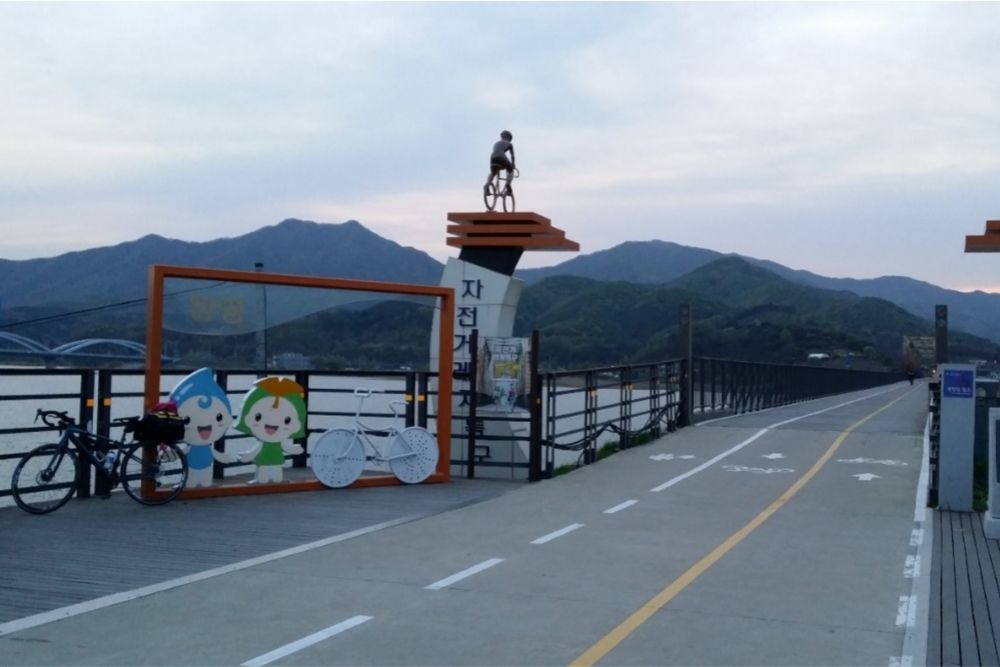 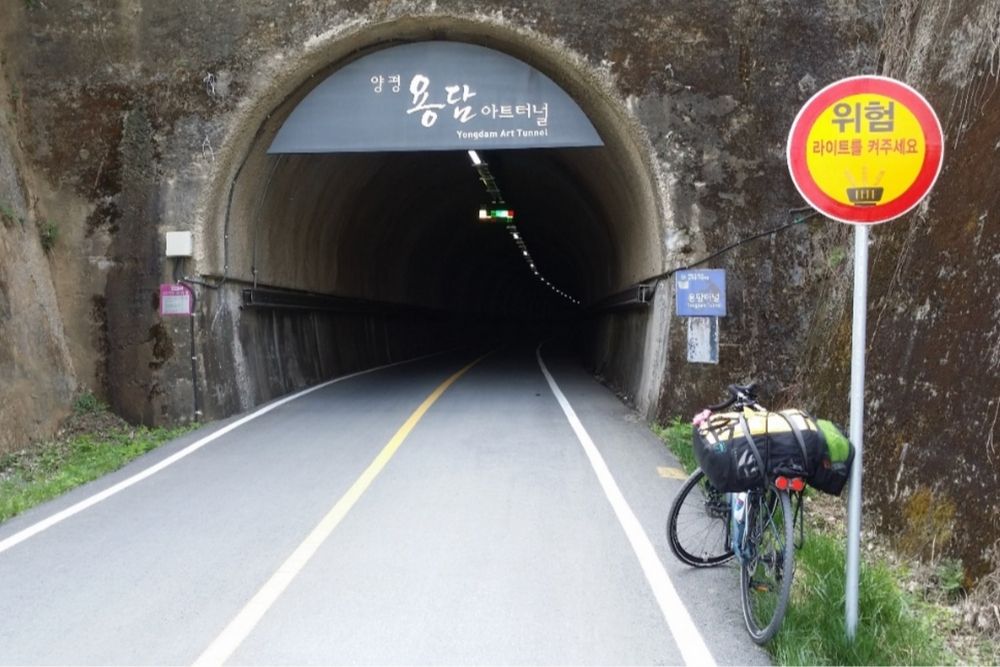 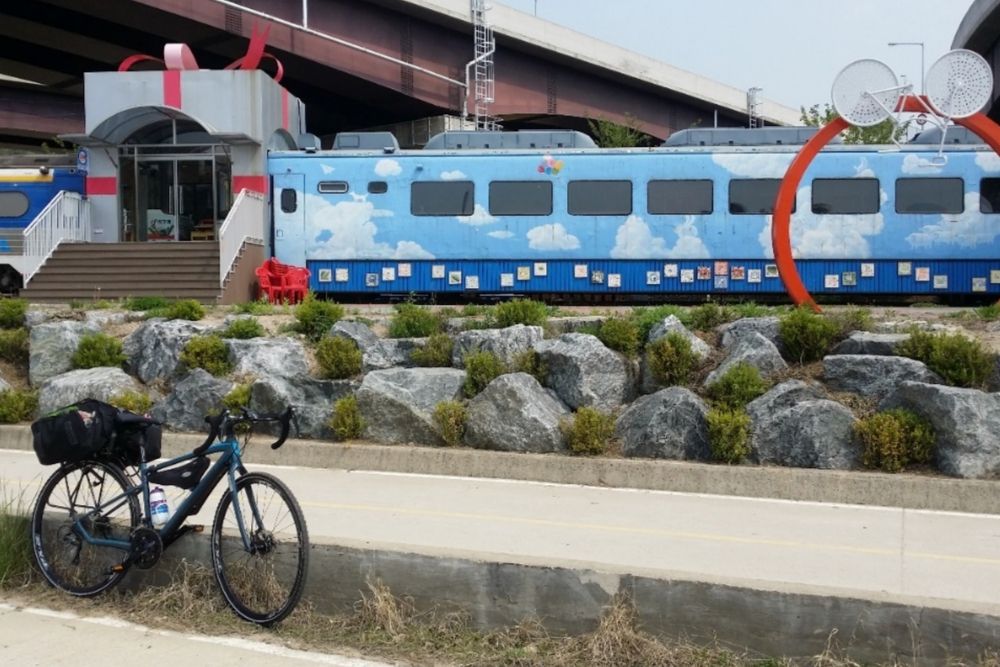 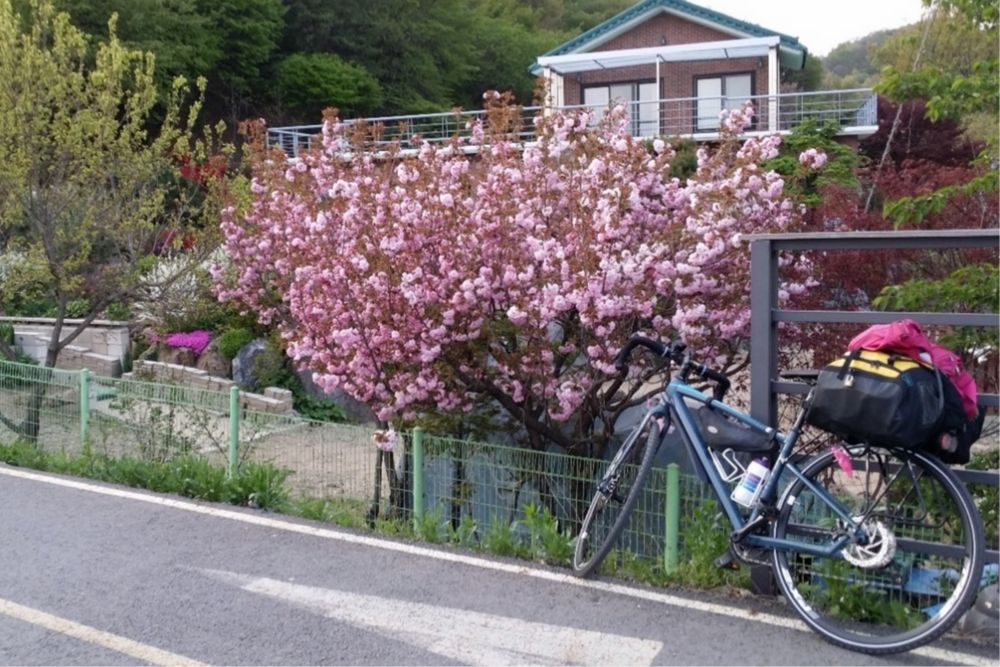 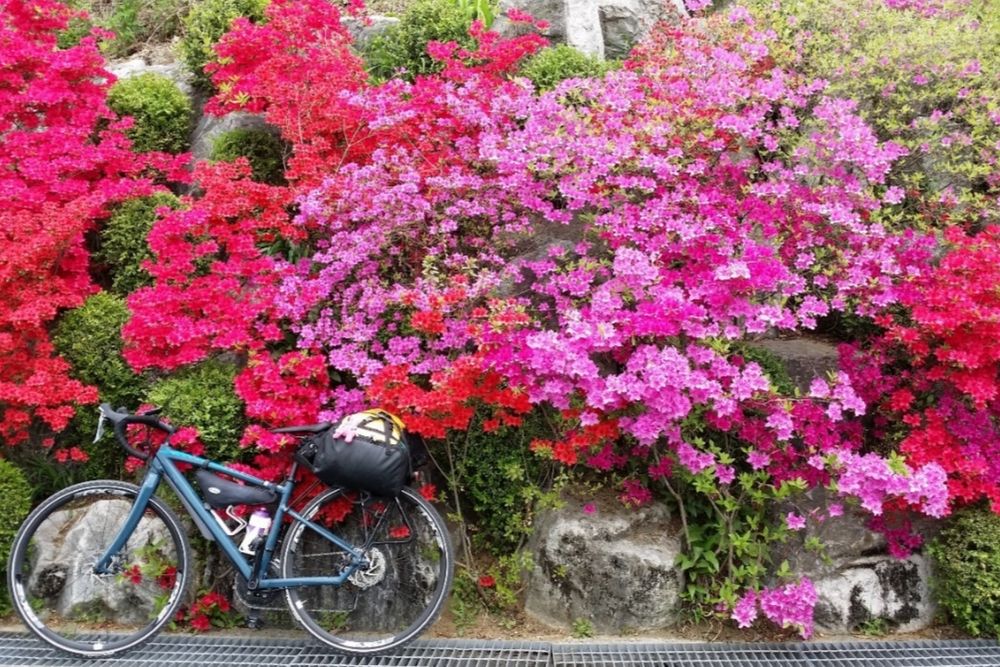 Although the 4-Rivers Cycling Path is relatively flat, however, riding through the infamously rough Ihwaryeong Pass of the Baekdudaegan Mountain Range (extending about 1,470 kilometres from Byeongsabong Peak in Baekdusan Mountain to Cheonwangbong Peak in Jirisan Mountain), requires great physical strength and endurance as one passes the Saejae Bicycle Route. 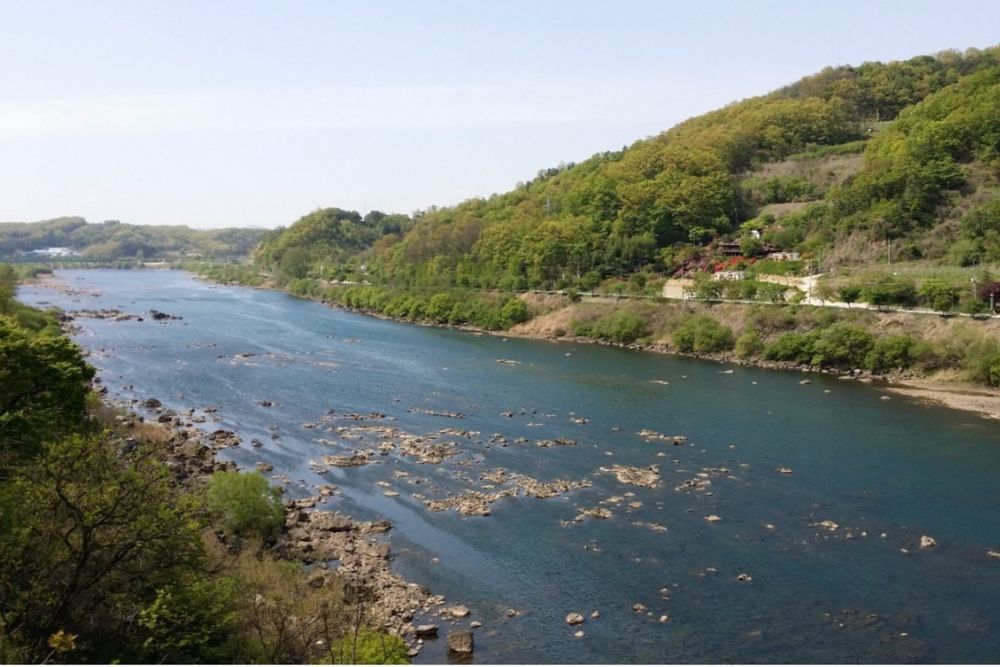 As this is the only route between Namhangang River and Nakdonggang River that goes over a ridge, it begins from Chungju Tangeumdae Terrace & Park. It goes through downtown Chungju before climbing to a higher elevation towards Ihwaryeong. The meandering and rising ridge is rough and steep, and in ancient times, travellers had to face tigers and other wild animals. So, it is said that people used to cross the ridge in groups. Past Ihwaryeong, the Saejae bicycle route goes through Mungyeong and joins the Nakdonggang bicycle route at Sangpunggyo Bridge in Sangju. 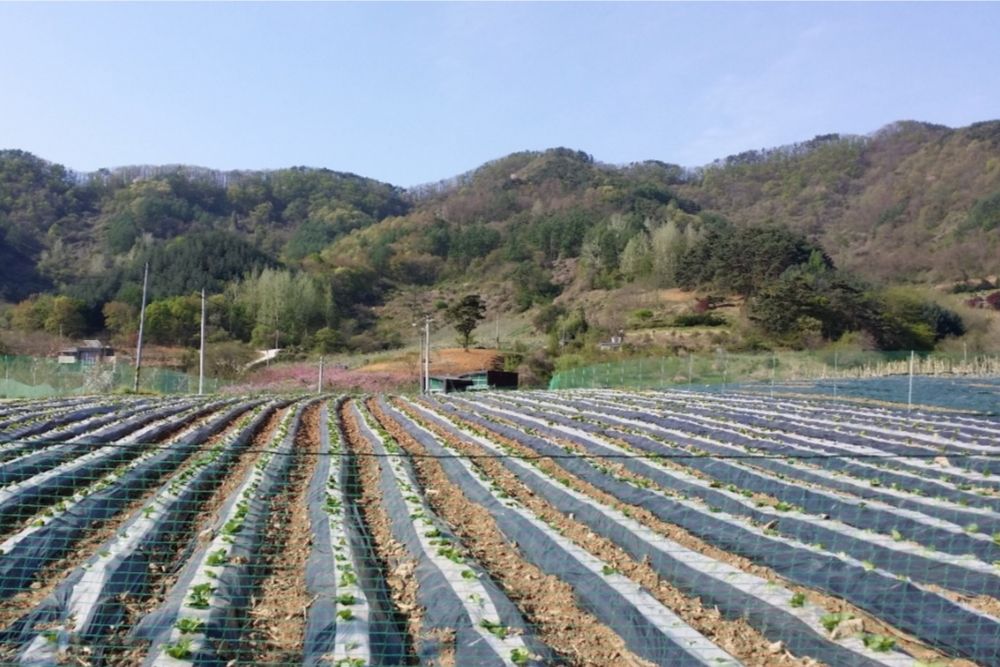 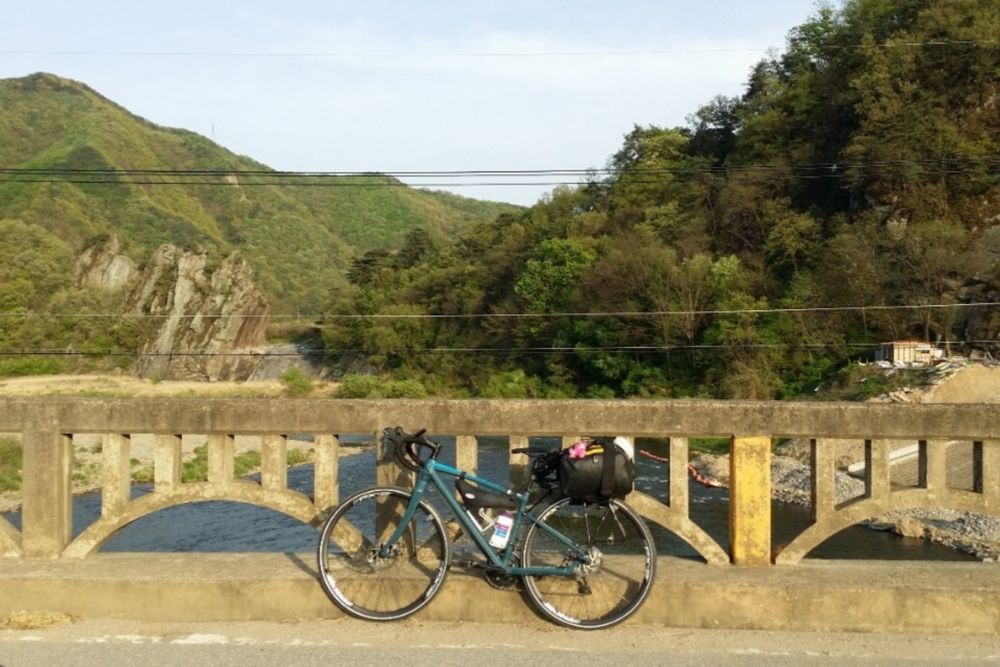 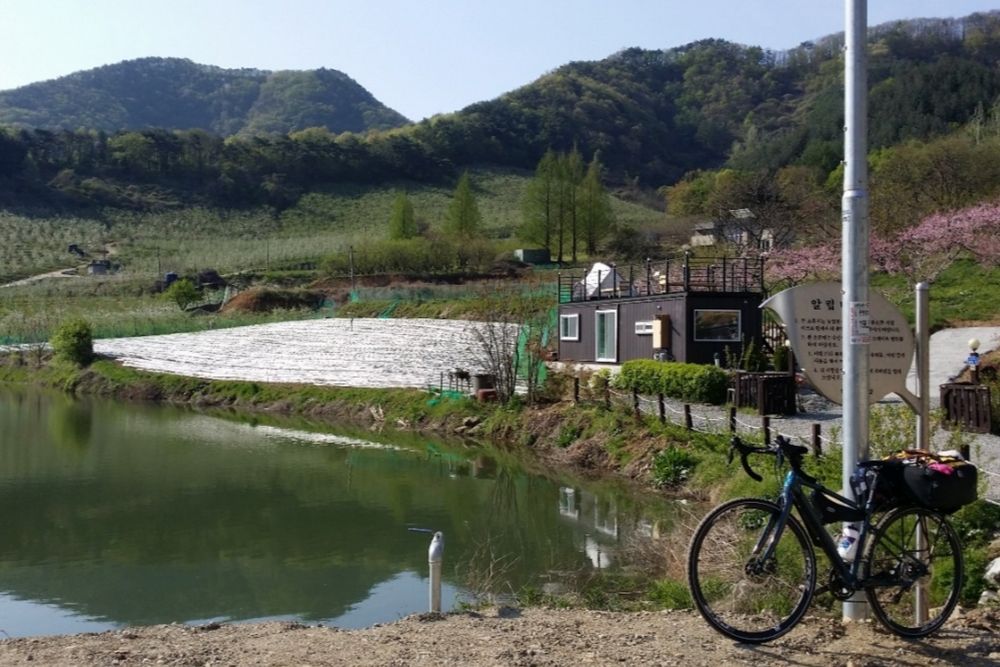 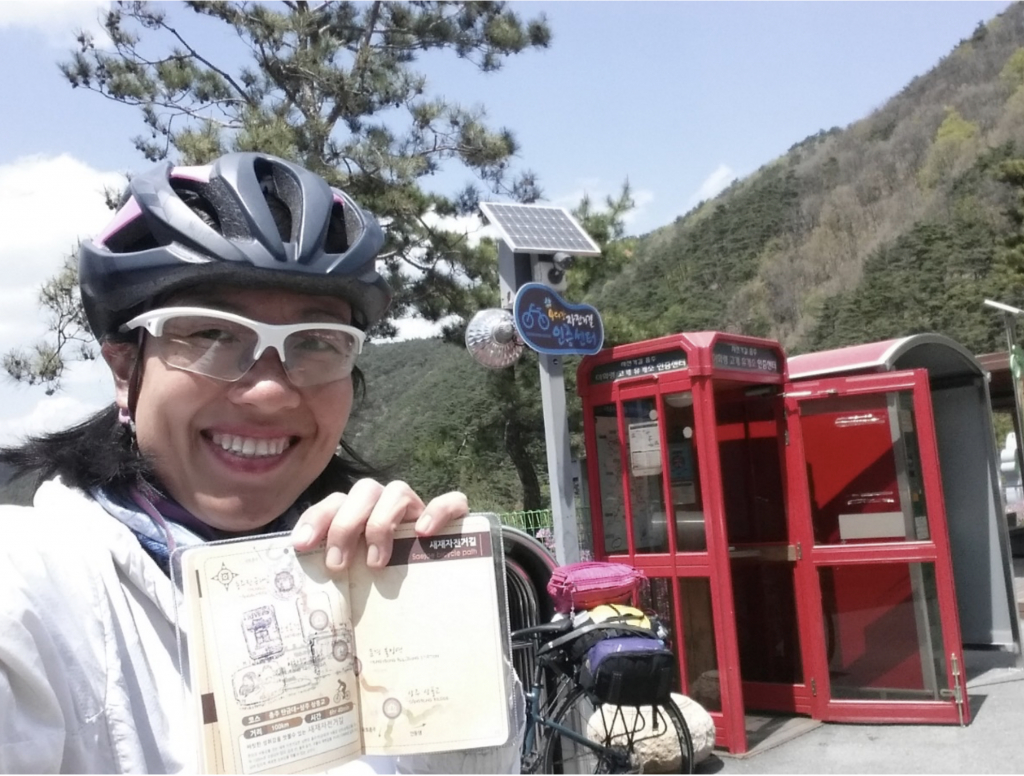 The endless hilly terrains towards Busan are grinding but endurable as you pace yourself well towards the end.  Be rewarded with the completion landmark and present your completed stamp booklet at the certification centre at Hangang Lock Gate in Busan to receive your hard-earned certificate and medal! 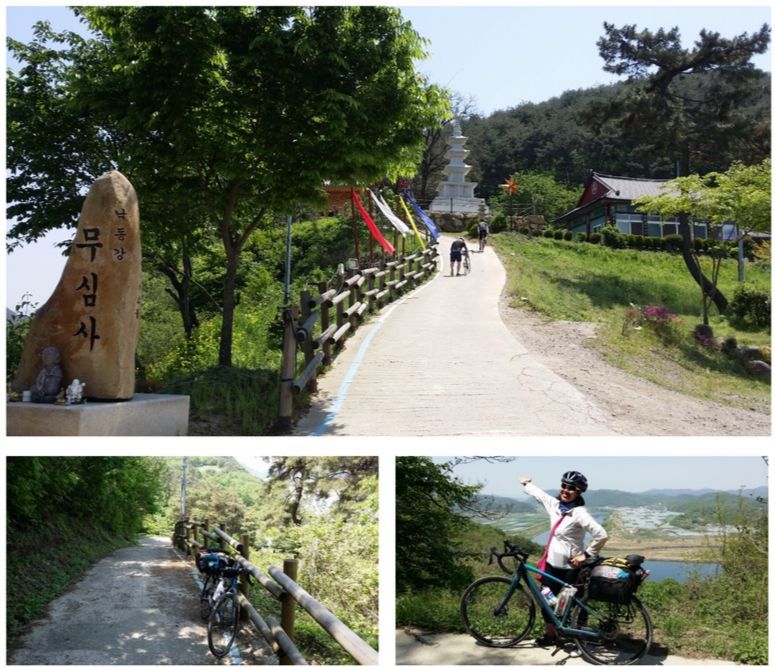 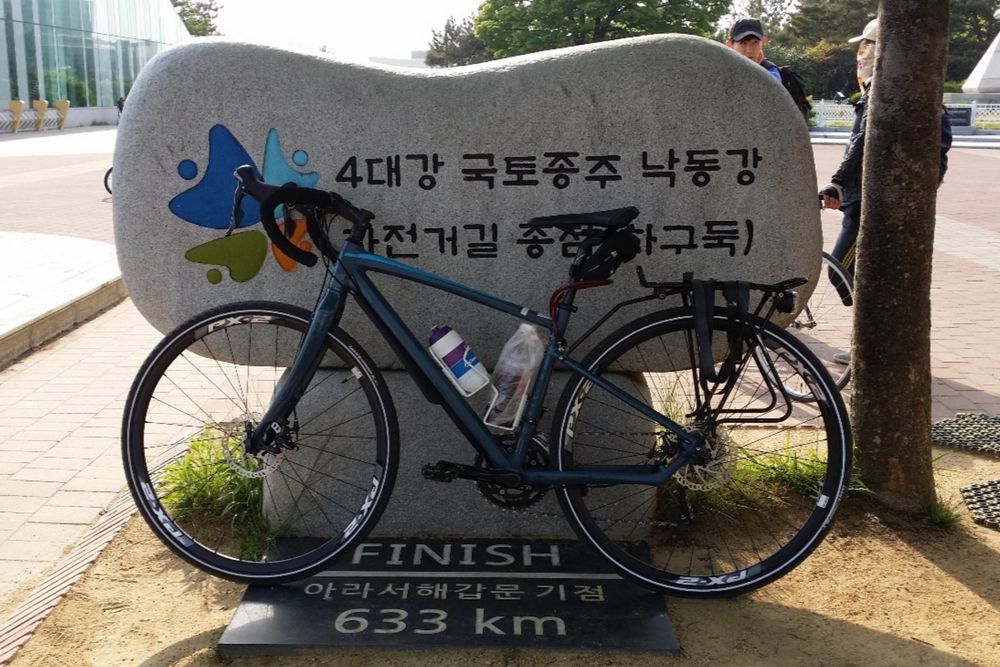