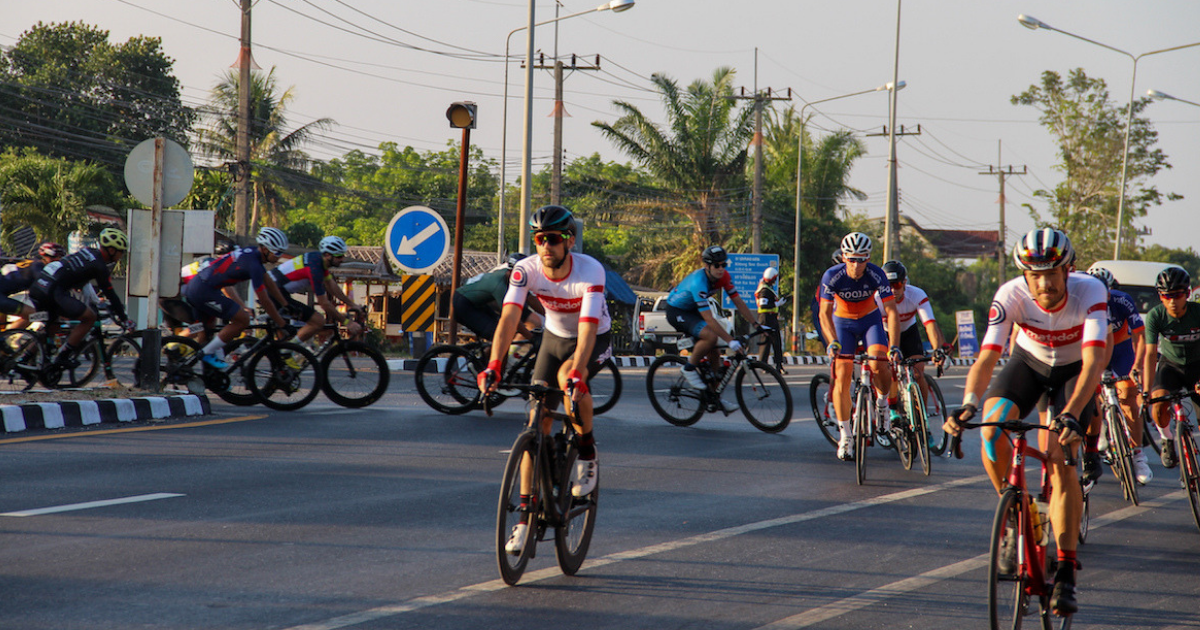 9 March 2019, Thailand – Stage Two was the longest stage, which brought us into the picturesque countryside. The route took riders towards the west coast before heading northeast into the island. 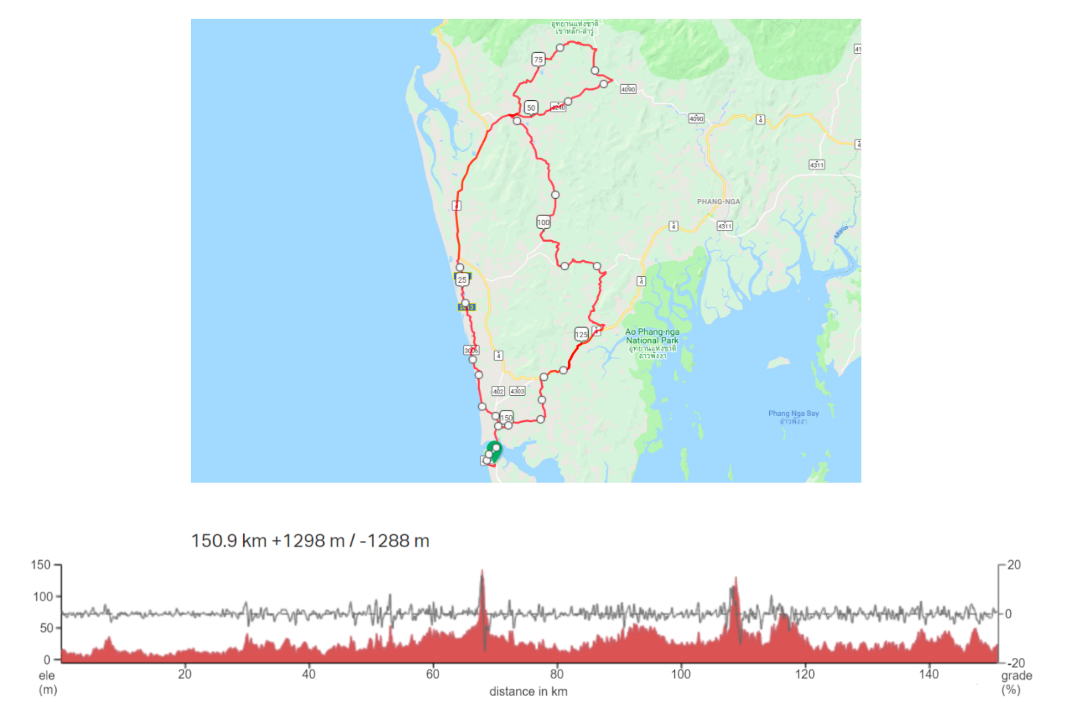 Opportunities to improve the General Classification results are available as there will be a Sprint Checkpoint at 36 km, followed by two King of Mountain checkpoints (KOMs) at the 63 km and 104 km mark respectively. The undulating terrain and hot weather will reveal our stronger riders.

The race kicked off with a 5 km neutral zone, bringing the riders straight to the coastal road. As they rolled closer towards the coastal road, the peloton sped up. The Elite Men’s peloton was cruising at over 45 km/h.

The Mavericks were controlling the pace, showing their presence and putting pressure on the bunch. Along the coast and into the village, the frisky peloton continued to surge over 50 km/h intermittently.

Attacks became more sporadic as the anticipation of the sprint check-point grew stronger. Riders were surging back and forth as the peloton was put under pressure from the attacks. The moment the 500m signboard to the sprint checkpoint was in sight, the sprinters took off.

A loud sound which can only be described as carbon smashing against tarmac resonated across the highway. A handful of riders were left behind in the pile-up. The remaining riders continued, hovering over 50 km/h as they attacked relentlessly, squeezing out every bit of energy with high hopes of breaking away. After multiple attacks (and getting caught), the peloton toned down, cruising at about 45 km/h. Or so we thought.

Further up ahead, Mike Koreneff from Allied World Treknology3 was out of sight. Putting down the power, he single-handedly put over a minute into the peloton. Such a brave move could only make us sit on the edge of our seats and anticipate; can Mike carry on like this for the rest of the 100 km?

The first KOM was Mike Koreneff. The Australian took it without competition. However, the tension was building as riders were gaining on him, just 10 seconds away. They caught up to him before the second KOM.

In the third peloton, consisting of Women’s Open, Supermasters, and Veterans, the bunch remained passive before stringing out at the start of the first KOM. The heavier riders were pushed towards the back as the lighter ones filtered through.

The descent of the first KOM saw riders flying over the barricade as they couldn’t slow down in time.

Stage Two finished in about 3 hours and 23 minutes from the Elite Men’s Category, with an average speed of 40 km/h over the course. 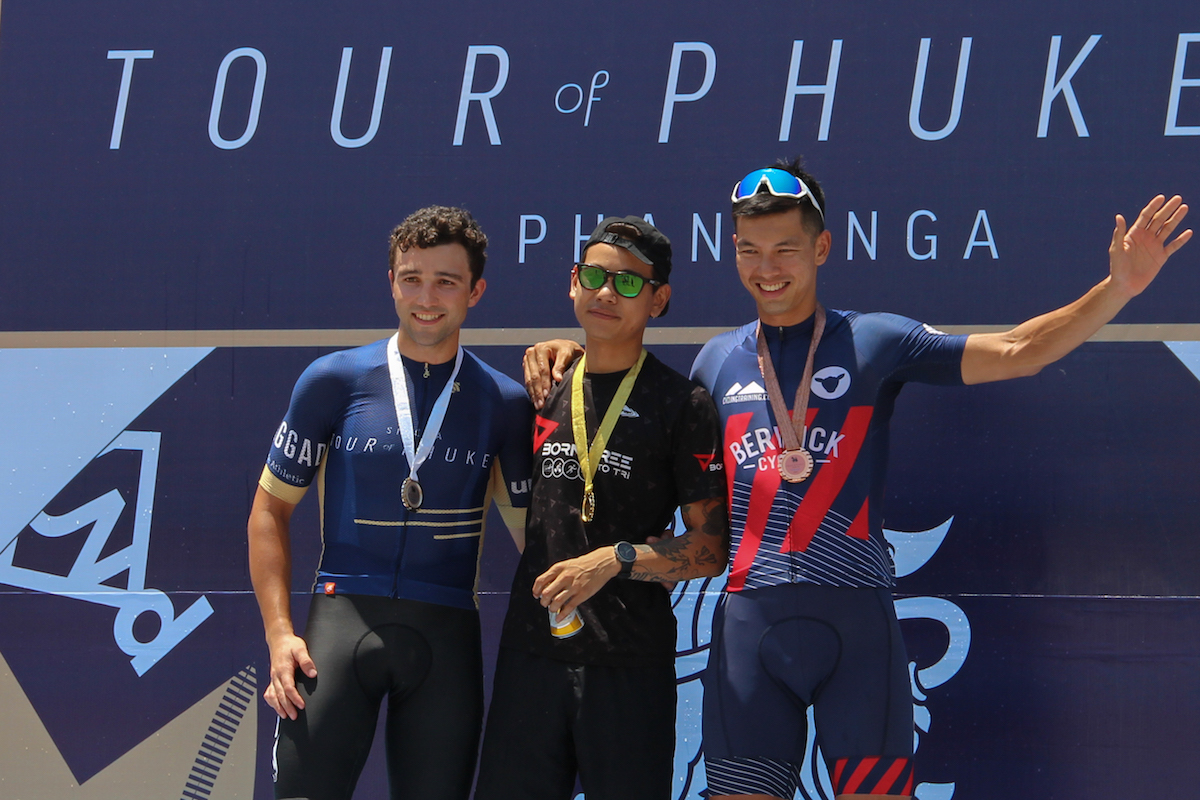 In first place, we have Sakchai Phodignam from AeroUp x Royal Thai Police Cycling, represented by his brother. Coming in second, we have Thomas Thrall from matadorRACING. Yeo Boon Kiak from CyclingTraining.CC.
took third place.

We see some familiar faces here as we have both Thomas and Boon Kiak finishing on the podium in Stage One. With all of them ending so closely, we expect some excitement in Stage Three as they battle it out for the General Classifications. 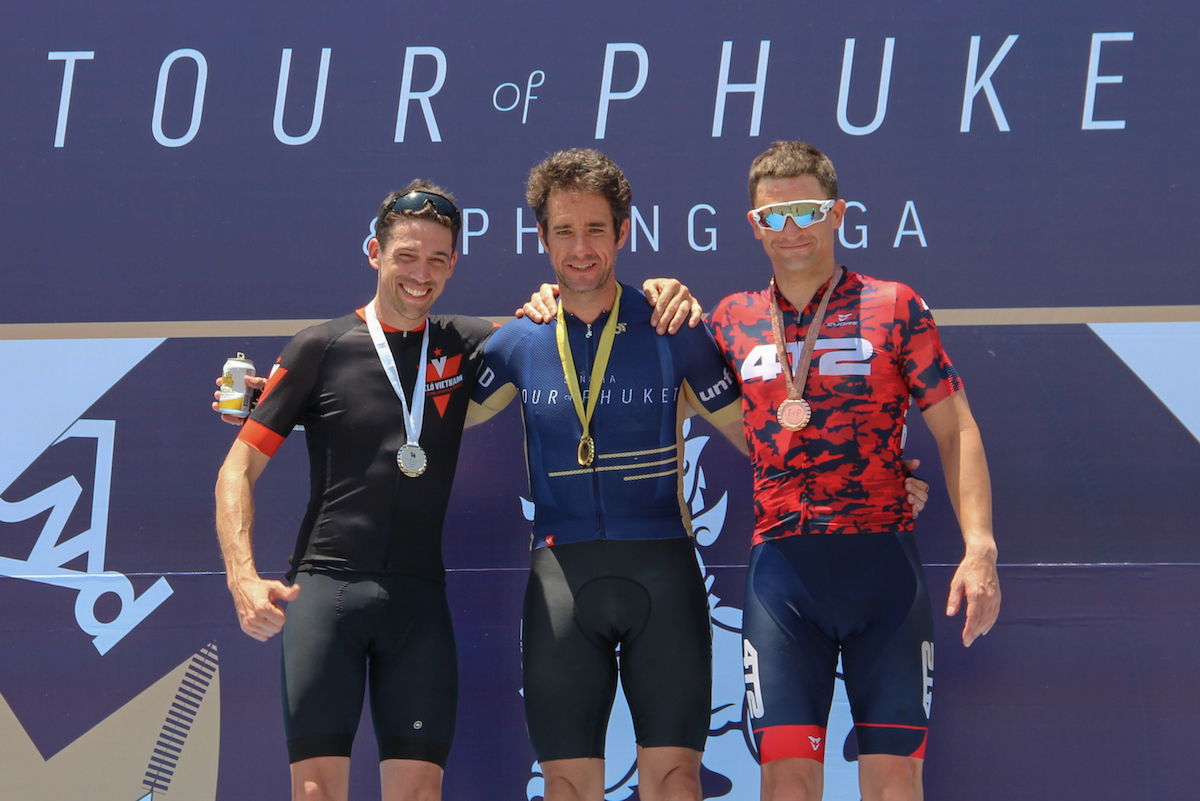 In the Masters’ category, we see a mirror of the results from Stage One. Romain Barbier from matadorRACING finished first, putting over 1 minute into the peloton. David Lloyd from Velo Vietnam and Marc (Dexter) Tzivelekas from 4T2 finished closely behind as second and third respectively. 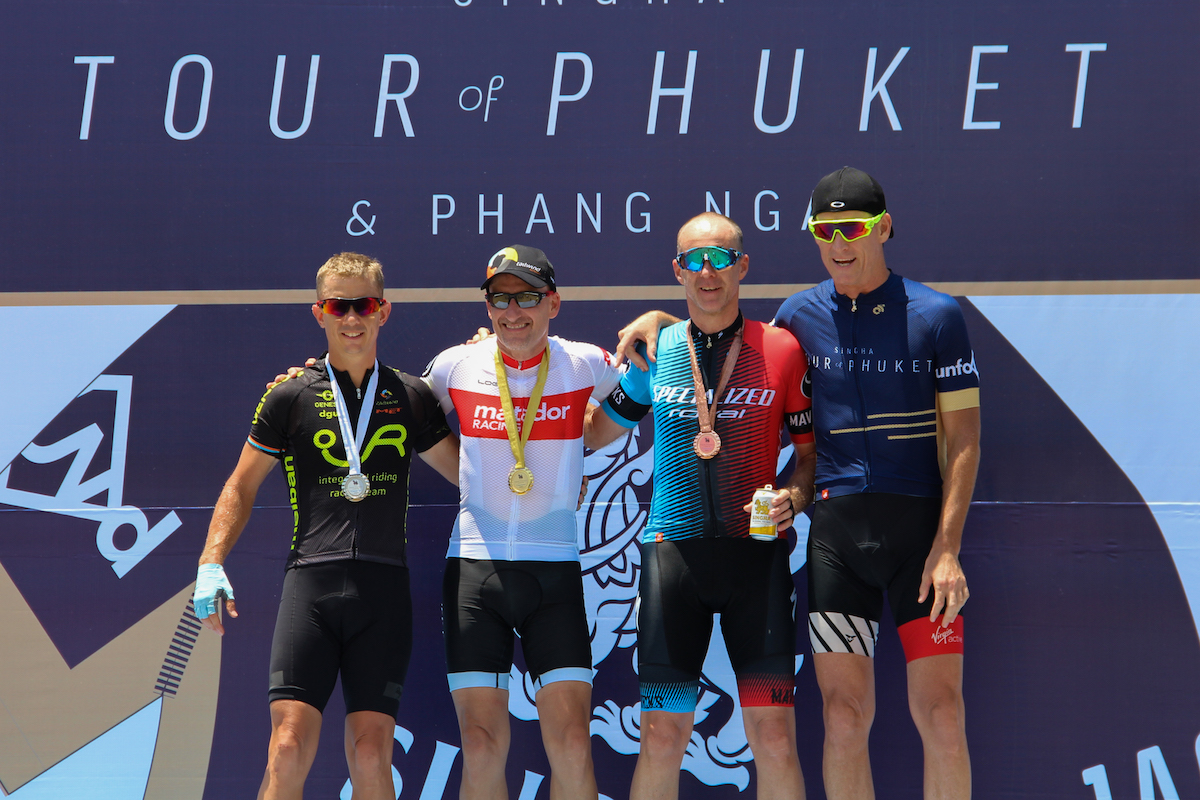 Coming in first, we have Colin Pearson from matadorRACING. Second, Marcus Hancock from Integrated Riding Racing Team. In the third spot, we have Stephen Ames from Specialized Roval Mavericks. Tim Carter remains the GC leader. The Supermasters peloton finished with a margin of just 10 seconds. 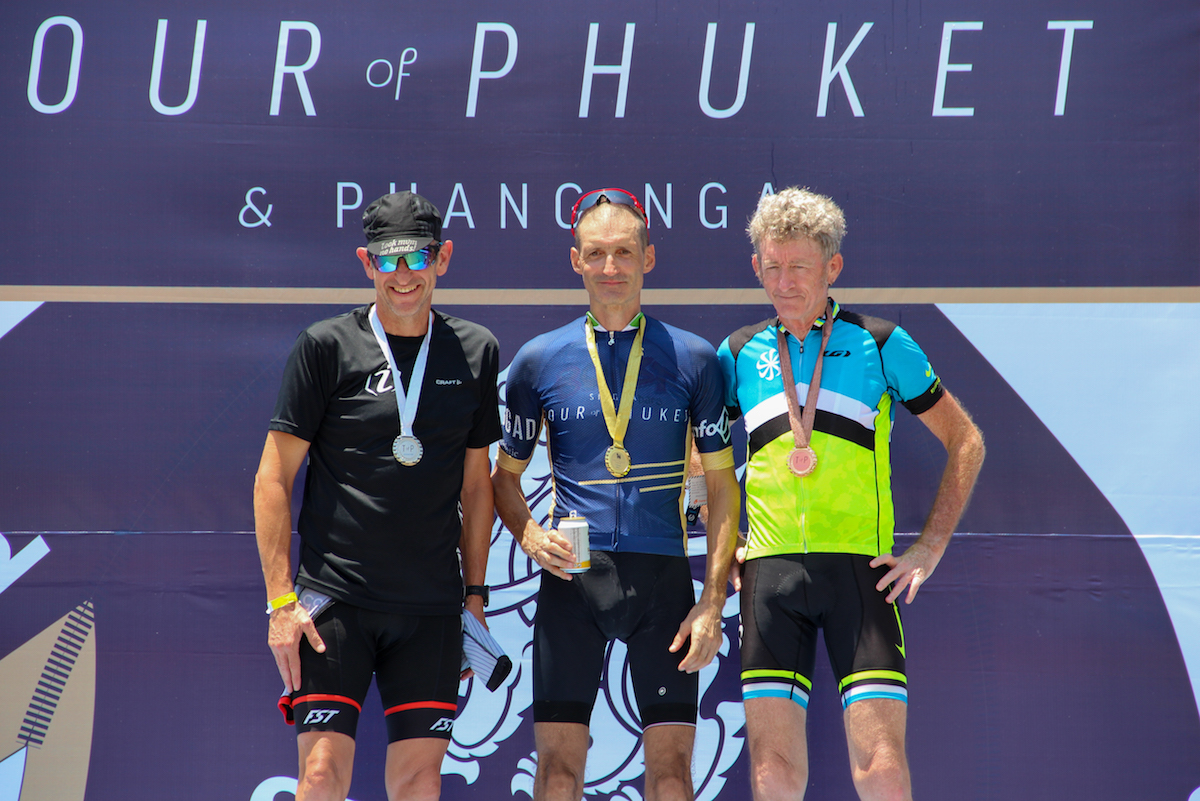 In the veterans category, we get to see new faces. In first place, we have Robert Herries finishing over a minute and a half ahead of the rest. Jonathan Earnshaw from YBCO Racing and Tom Redding from Nike finished close behind, clinching the second and third position respectively. 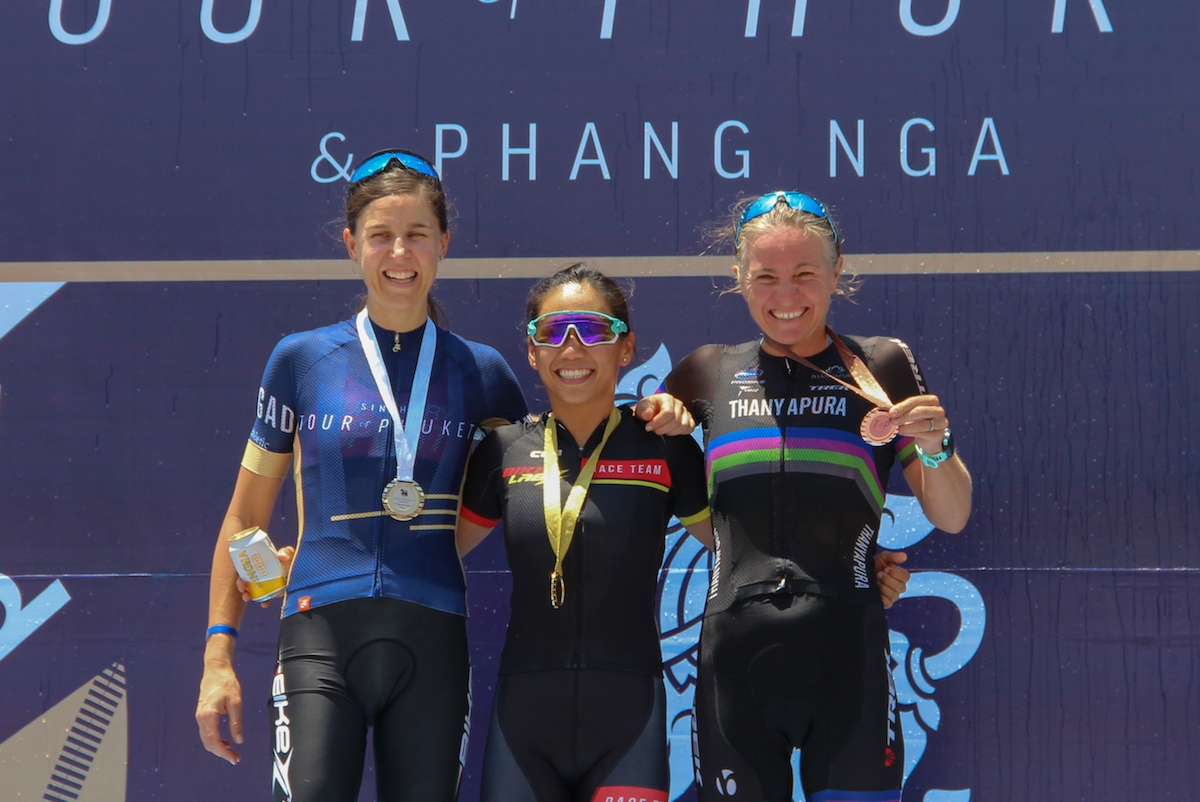 Chelsie from Bikelabz Racing finished first ahead of Sarah Schneider from matadorRACING. Both of them established a huge time gap ahead of the rest of the peloton, putting over 5 minutes into the second runner up Lucy Richardson, from Thanyapura.