9D8N solo cycling trip to Shiretoko with a PakiT bike 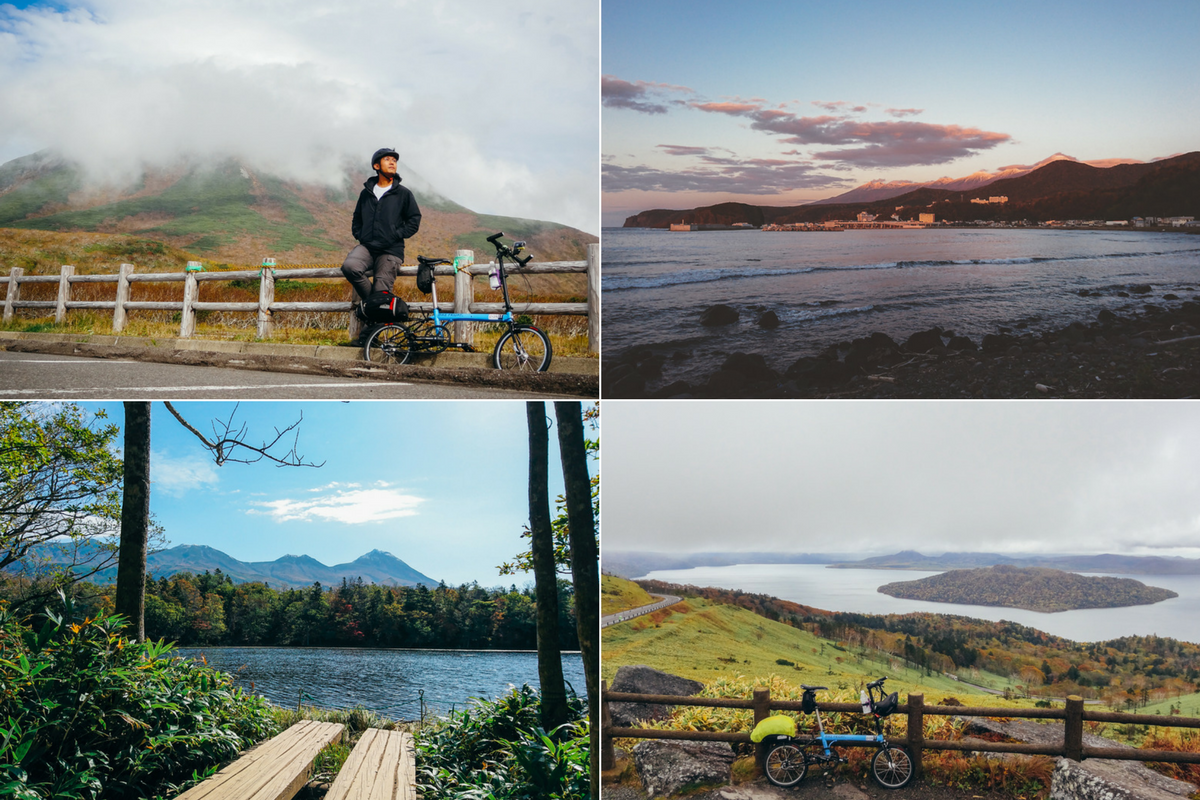 9D8N solo cycling trip to Shiretoko with a PakiT bike

I have done some solo bike tours with my Bike Friday Tikit and taken it to some unique trips like Taiwan, Tasmania, & Iceland. These trips have made me realised how a high performing folding bicycle can be so liberating and allow me the freedom to enjoy the wonders of creation.

Am thankful to be given the chance to own the successor to the Tikit, the new Bike Friday Pakit. One of the things that really intrigued me to this new bicycle is how light it is compared to the Tikit and most importantly being a belt driven model really helps a lot in packing a bicycle for travel, cleanly! No more greasy chains!

While the Brompton still trumps in the aspect of it’s folded compactness, the amount of effort to dismantle and pack the Pakit for travel is much faster and easier compared to the Tikit, and yet being much lighter than the Brompton. After much test rides with the Pakit, I must say the quality of the ride is the “Bike Friday Ride”! Think of it as a mini Bike Friday Pocket Rocket or a mini Roadie.

I am someone who personally loves to travel to Japan and have done some backpacking trips, photography trips, and even a short ride with a Brompton from Fukuoka to Hiroshima. I have been to Hokkaido, Japan, a few times but never the northeastern part known as Shiretoko, a UNESCO heritage site. 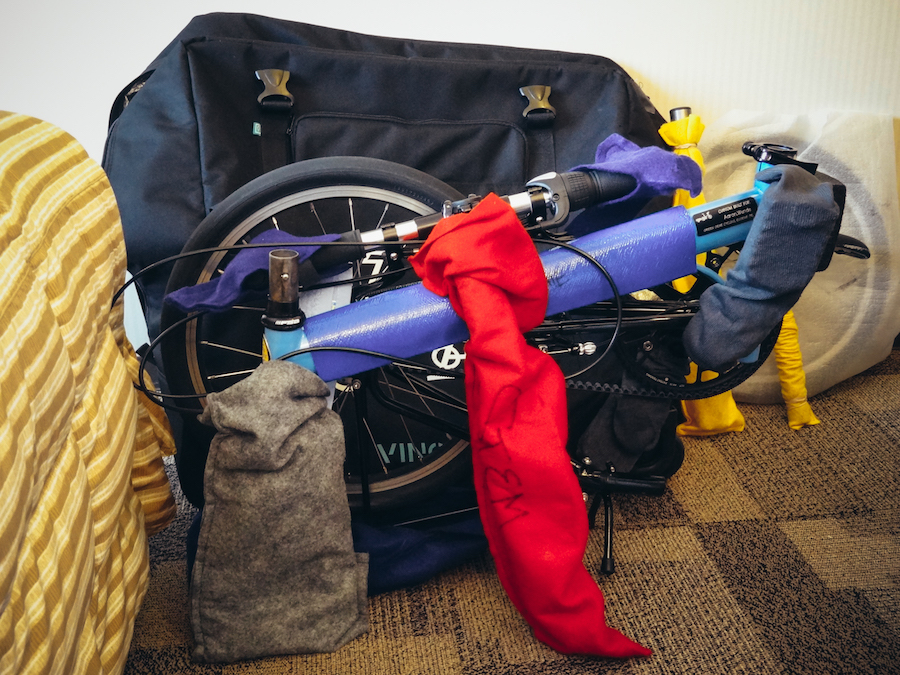 Shiretoko is well known for its beautiful forestry and mountain scenery, and if you’re lucky, you might spot Ezo Bears.

So around October 2017, I had a short window to do a simple bike tour and I booked my air tickets just half a day before my flight, decided that the Pakit will be the choice of bicycle to pack for the trip, and scrambled to pack the Pakit into a soft bag meant for the Brompton. 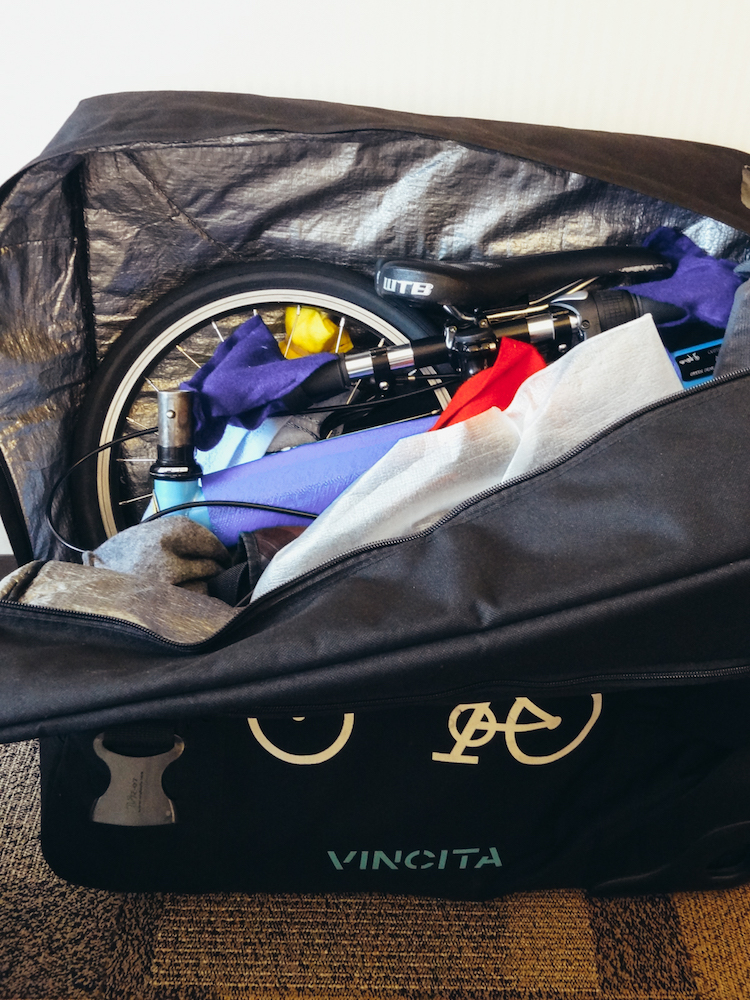 It’s an interesting bag to use and it even accommodated my Bike Friday Tikit during my Tasmania trip. October is also a good time to experience the Autumn colors in Hokkaido.

The aim is to explore Shiretoko and ride through 3 major mountain road passes, one is 700m Shiretoko Pass, 600m Lake Mashu and the 3rd being about 500m high Bihoro Pass. This will be the 2nd time the Pakit is packed for an overseas ride and my 1st trip to Athens & Santorini with the Pakit has prepared me well for this Hokkaido expedition.

Will be an interesting challenge to see how the Pakit holds up despite being a commuter bike, especially for the climbs, and considering my Pakit configuration is a Sturmey Archer 3 speed hub.

I flew from Singapore to Tokyo, did a transfer to a domestic flight towards Memanbetsu Airport, and boarded the bus bound for Abashiri, Hokkaido. There’s the soft bag meant for the Brompton but with a Pakit inside!

Pakit packed in a soft case meant for a Brompton, bike is protected with packing materials from Bike Friday. Pedals were protected with socks provided during one of the many flights during my overseas trips. 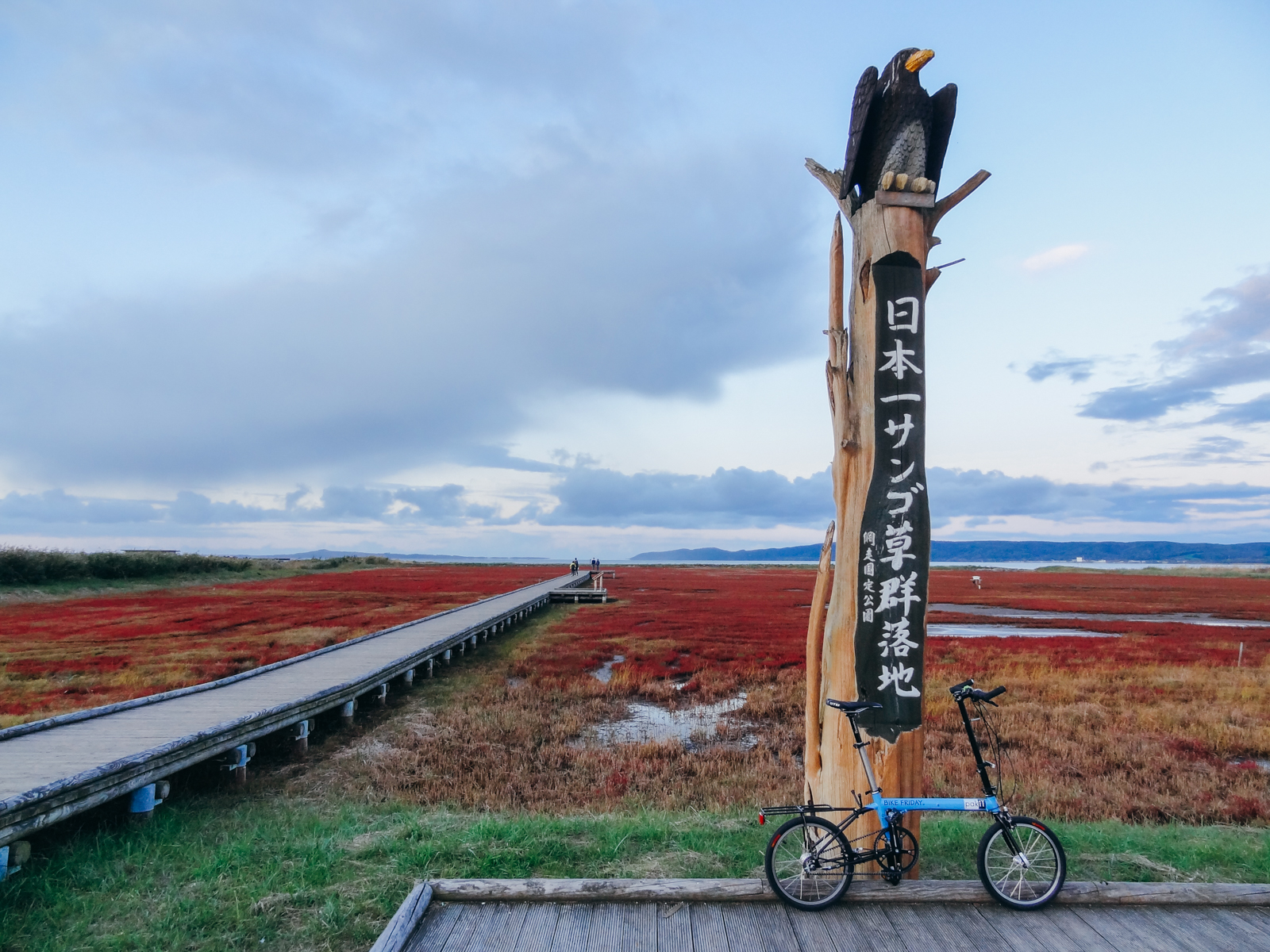 During the flight to Hokkaido, I met a teacher from Singapore who was bringing his students to explore the northeastern part of Hokkaido as well. He was sharing me that there’s a Lake, Lake Notoro, that is filled with lakeside fields of red glasswort during this autumn season in Hokkaido. 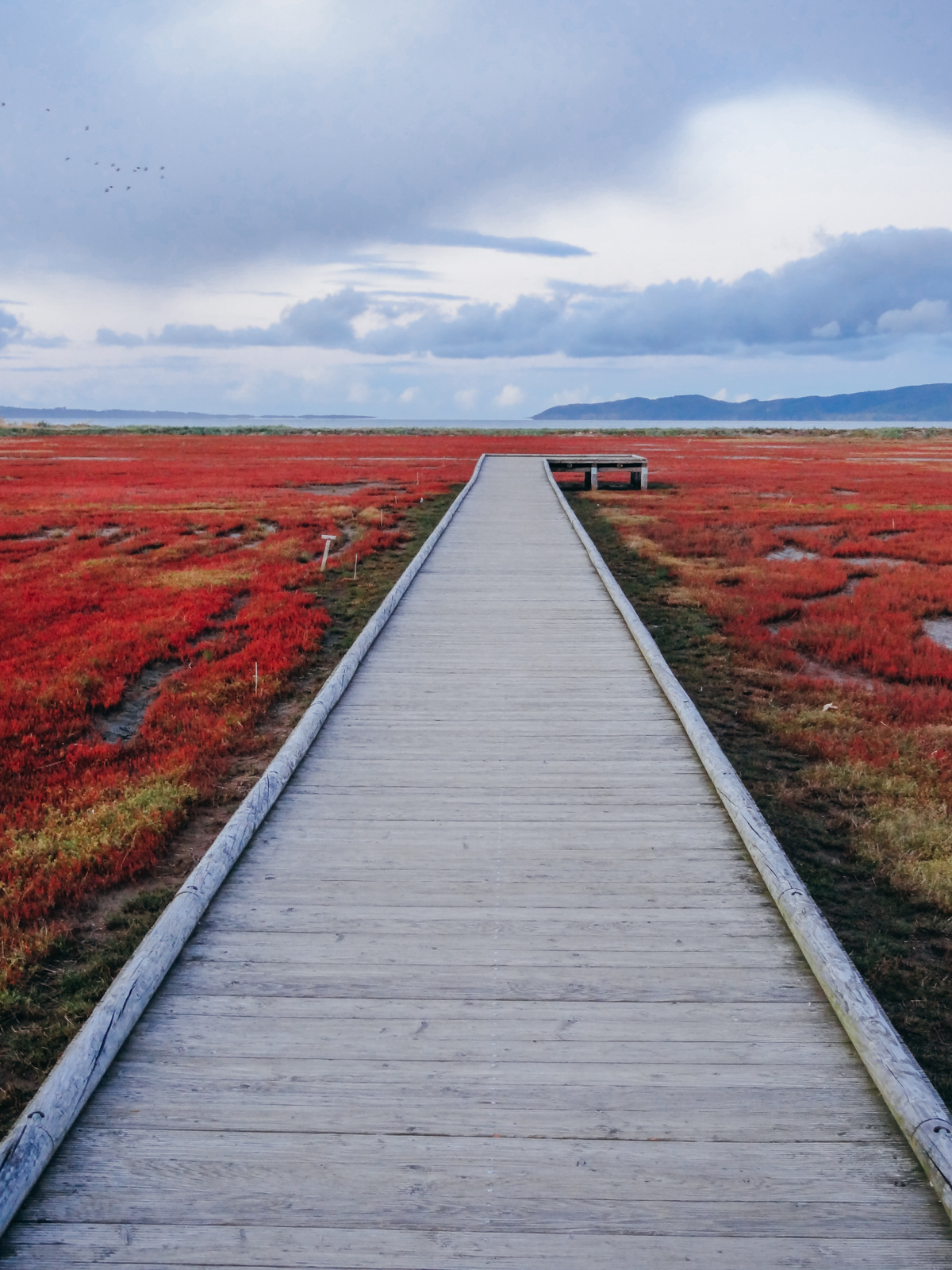 Upon landing in my Hotel in Abashiri in mid-afternoon, I scrambled to get the Pakit fixed up in less than 15 minutes, and rode about 13km to Lake Notoro. Truly I was greeted by the beautiful sight of a lake blanketed in red.

Took some time to explore the area using the boardwalk and the rest of the day was going back to the hotel to get myself ready for the next few days ride of 500+km exploring the northeastern side of Hokkaido.

The 2nd day’s ride aim is to reach the town of Utoro where I will base myself there for 2 nights at a hostel and eventually do a short trek in Shiretoko. The bag of choice is my trusted Arkel tailrider which fitted perfectly well on the Pakit’s rear rack. I carried a light 20-liter backpack from Decathlon for some additional baggage space. 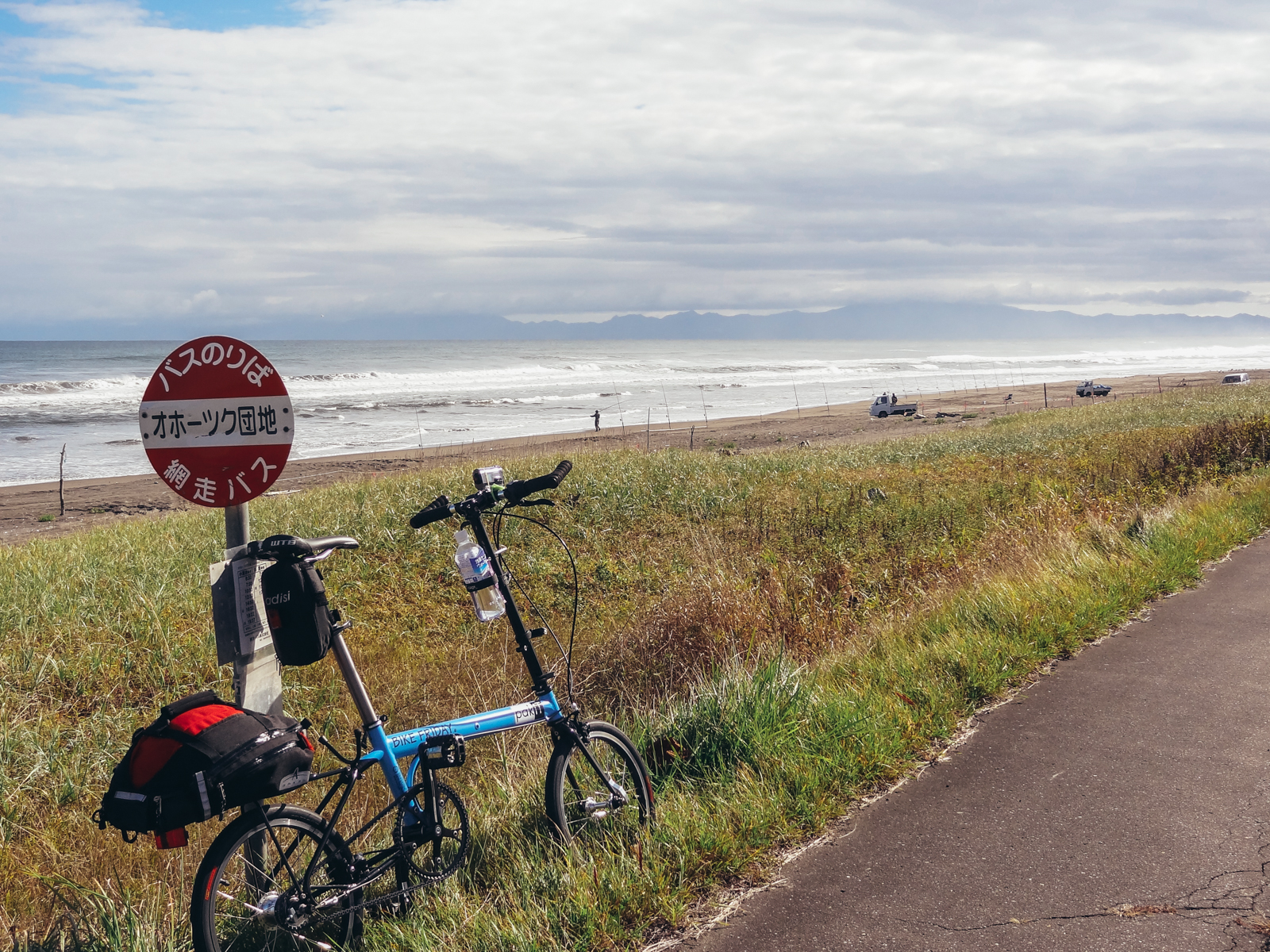 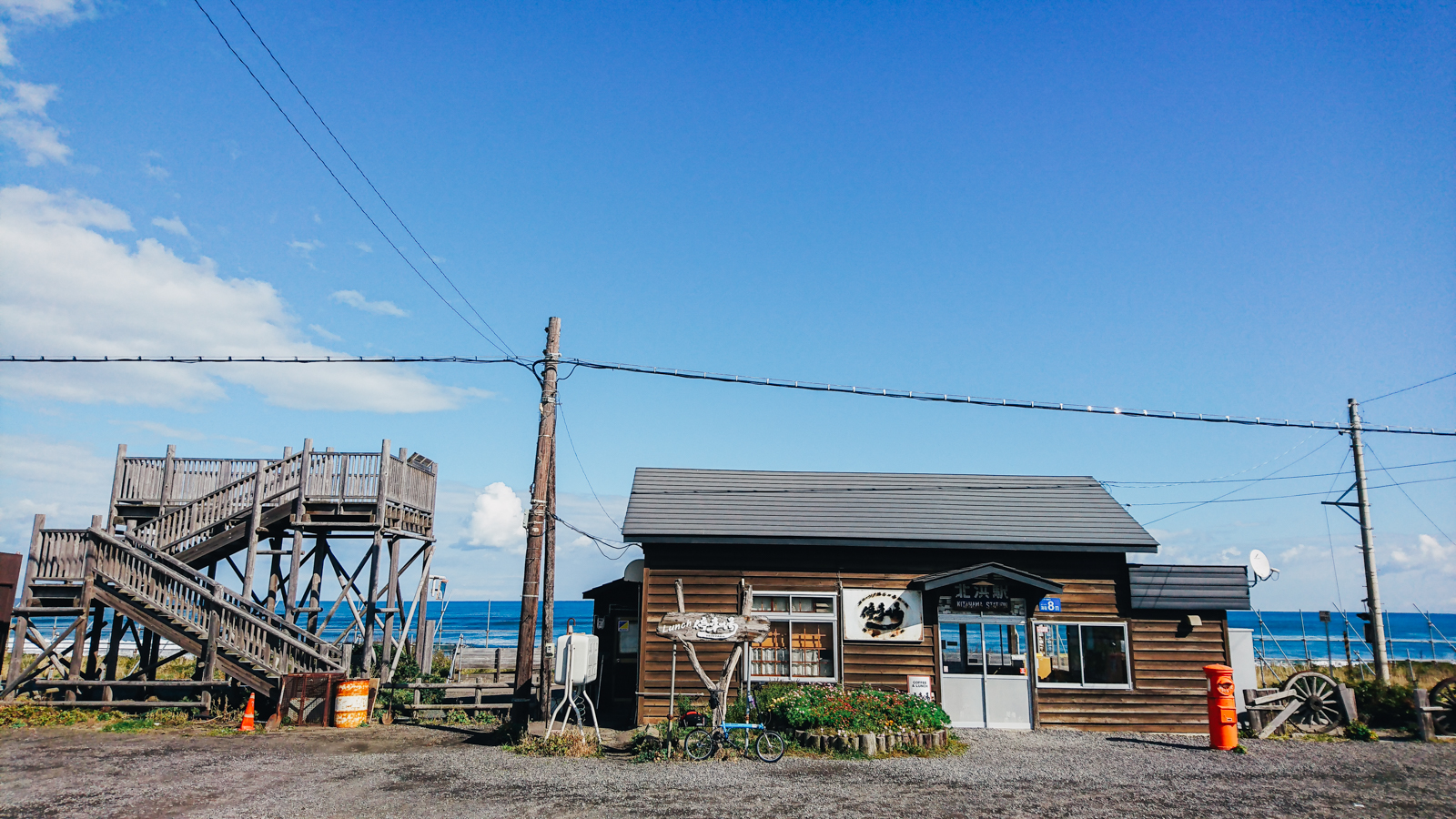 Hokkaido to me is a lot of countryside land. Not many cars to fear on the roads, and if so the Japanese drivers are friendly and keep a safe distance from you the cyclist. And if the needed arises, there might be wide pavements for you to ride on.

The trip starts from Abashiri and Cycling along the coast on well-paved roads, overlooking the Sea of Okhotsk, to the town of Utoro. It’s nice to be able to wander to some smaller roads at times and experiencing some of the farmland roads, quieter and more scenic. 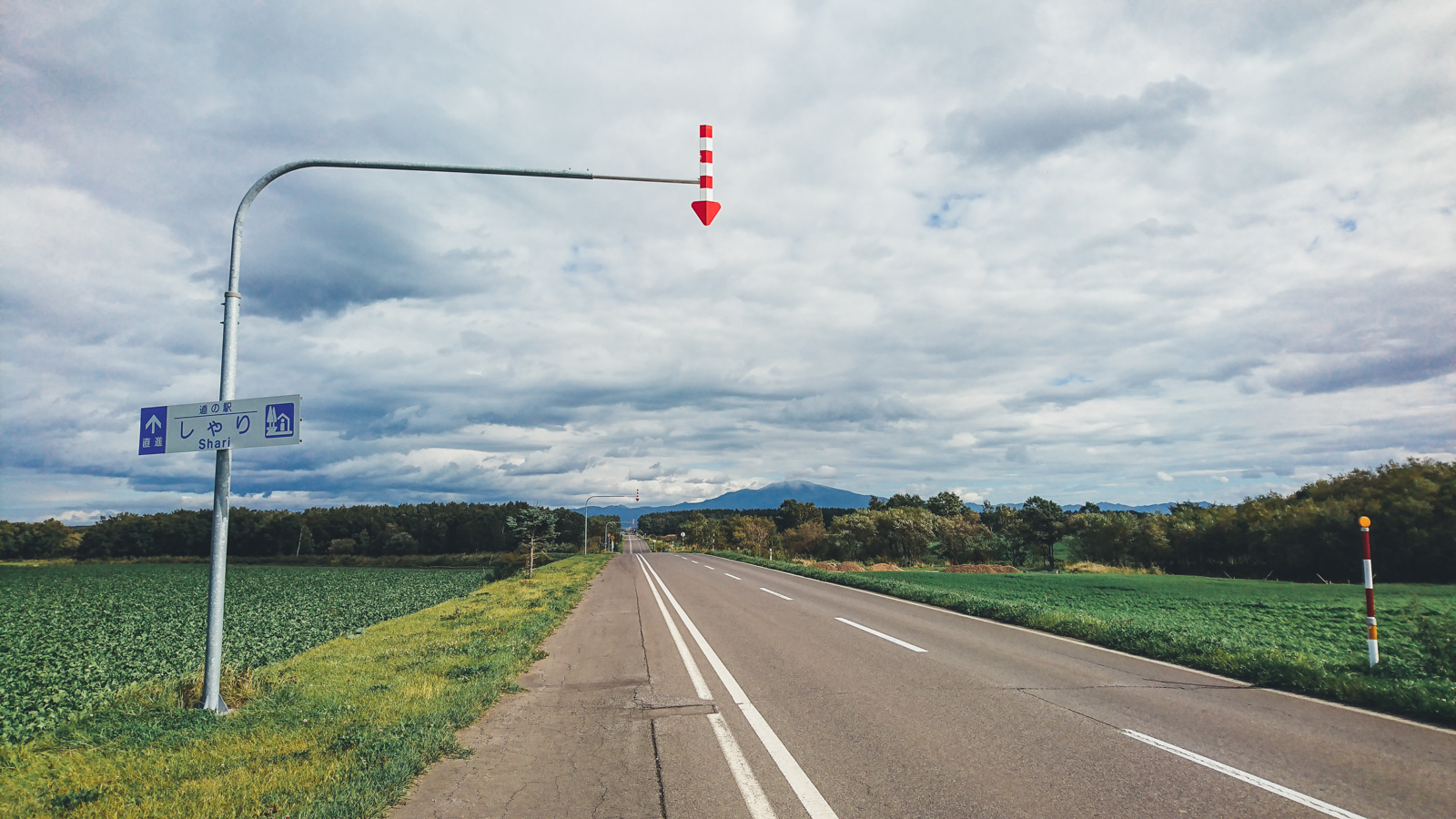 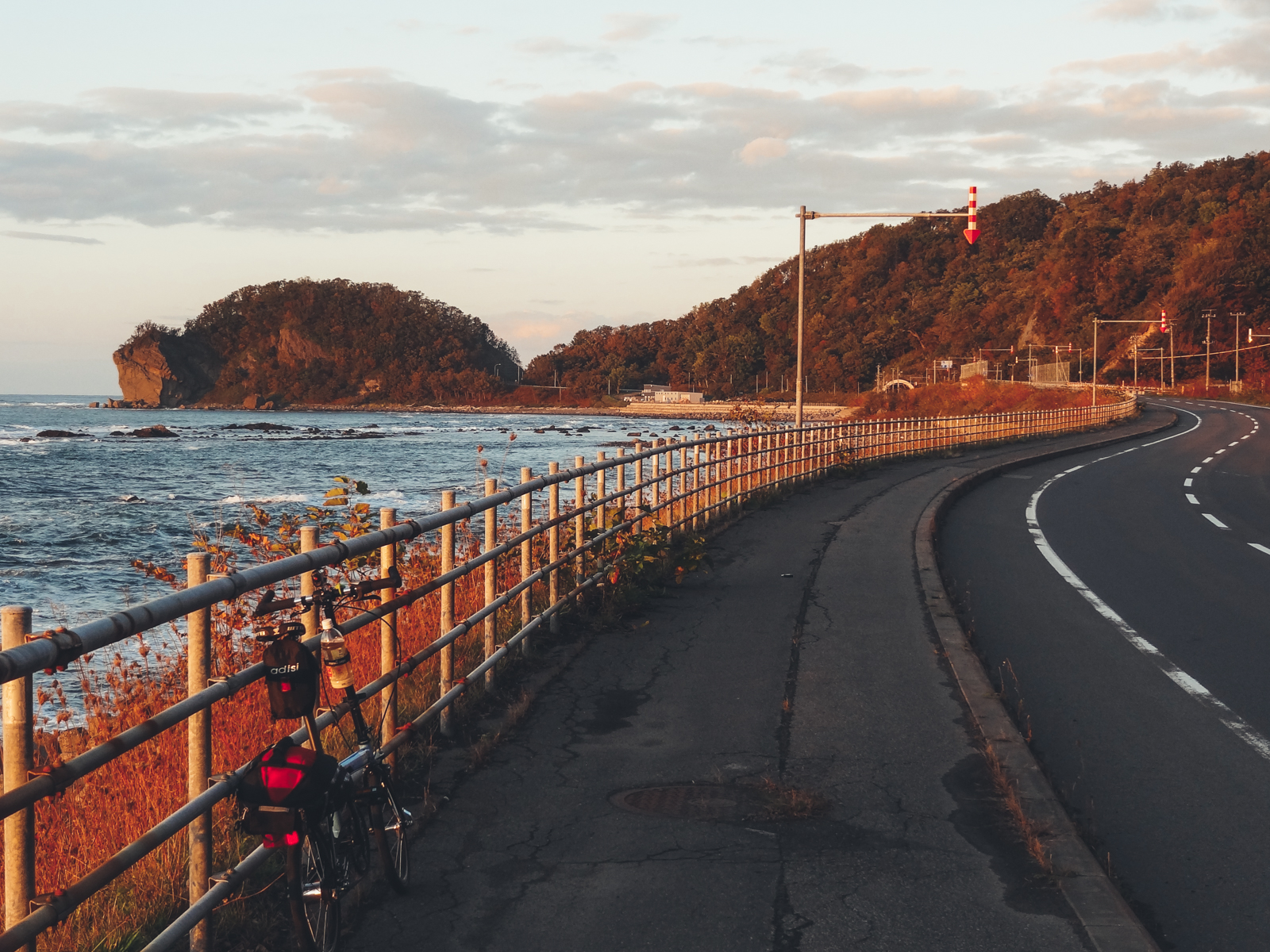 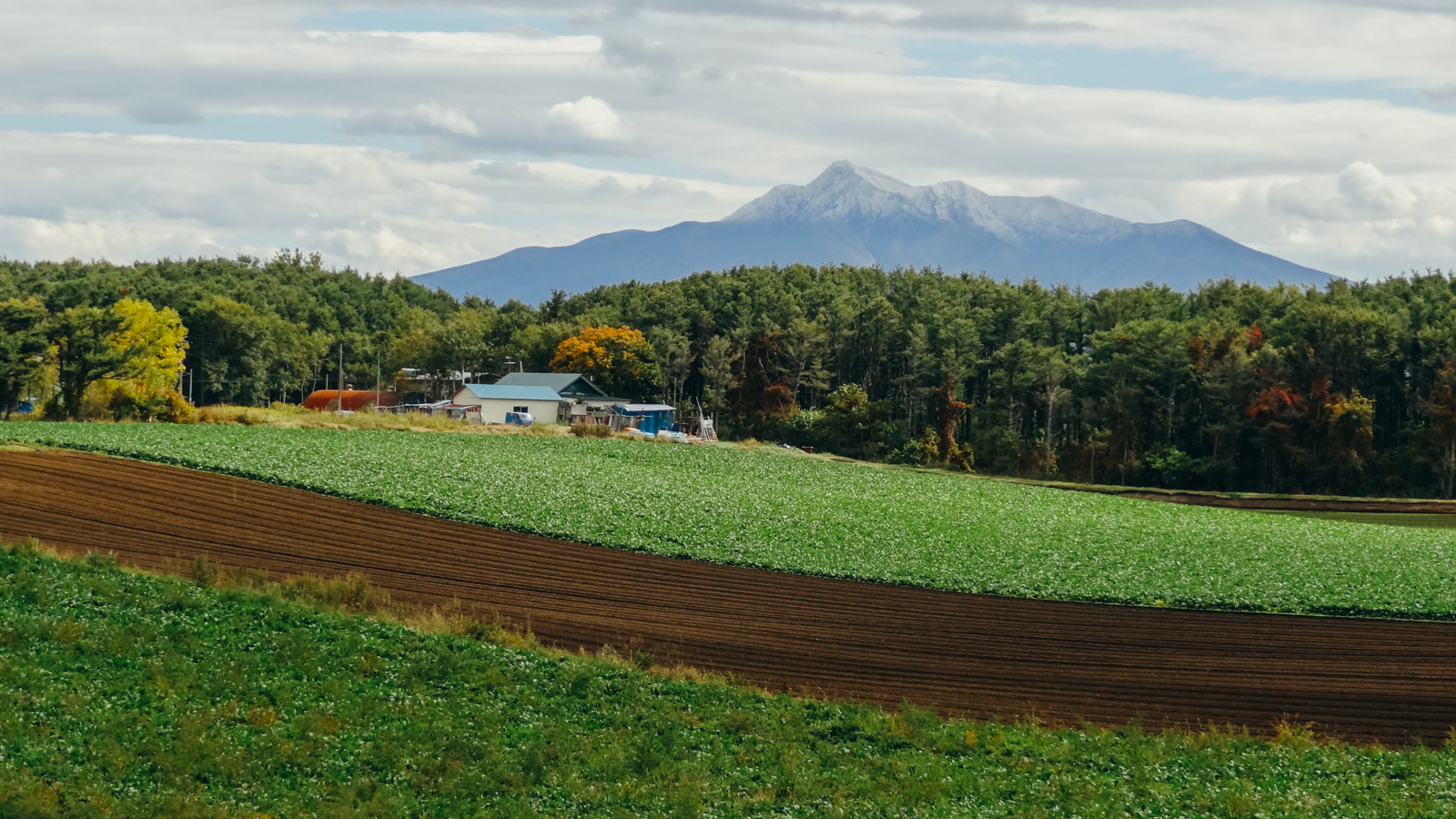 I also enjoy visiting some of the Japanese train stations that are along this coastal road. So much wooden charm to them.

I reached the town of Utoro just so during sunset and witnessed the sight of the Shiretoko mountain range I was yearning for so long to explore, basked in the purple hues of sunset and highlighting its peaks! Below will be the town of Utoro where I will be spending 2 nights in a hostel. 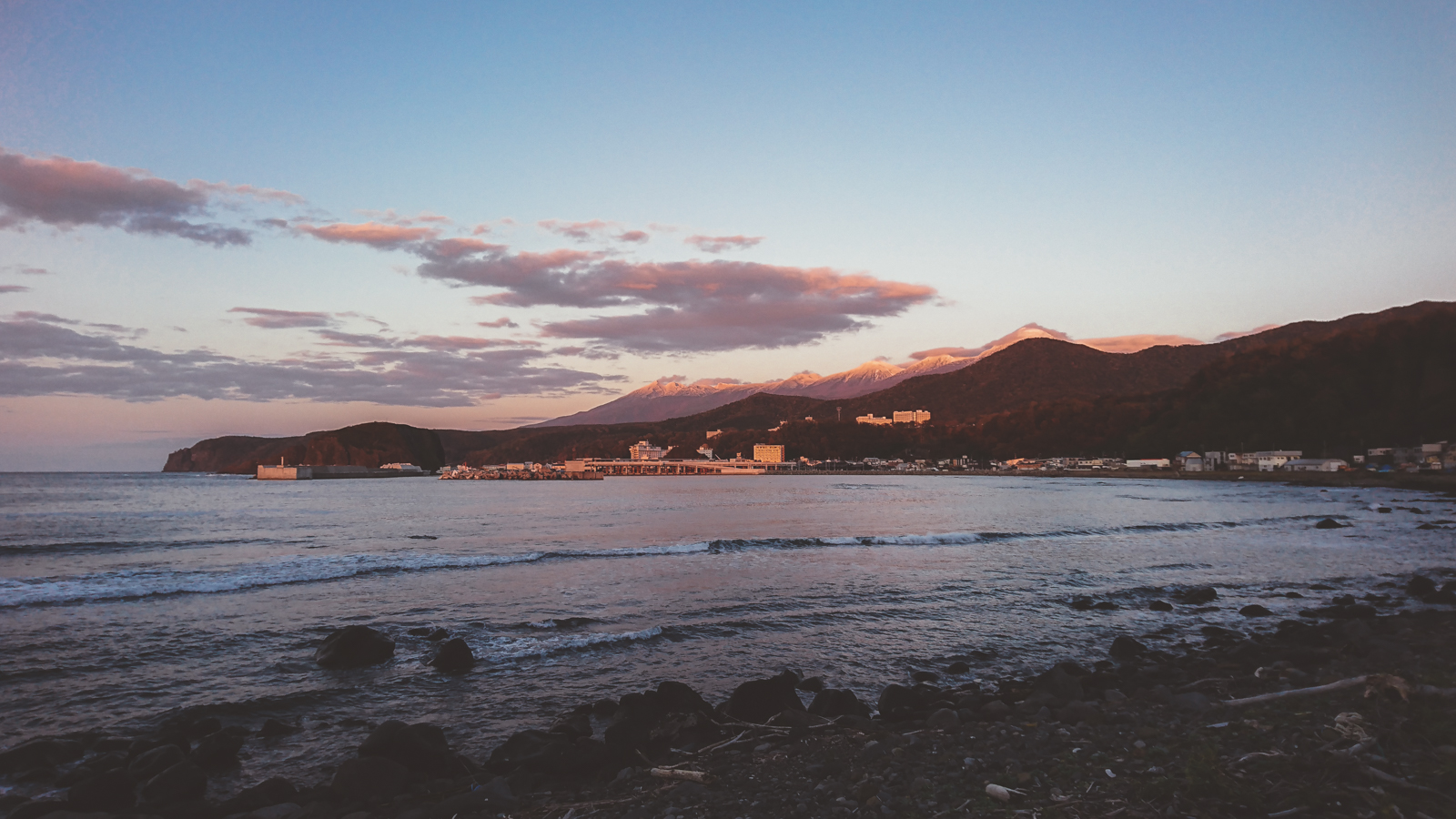 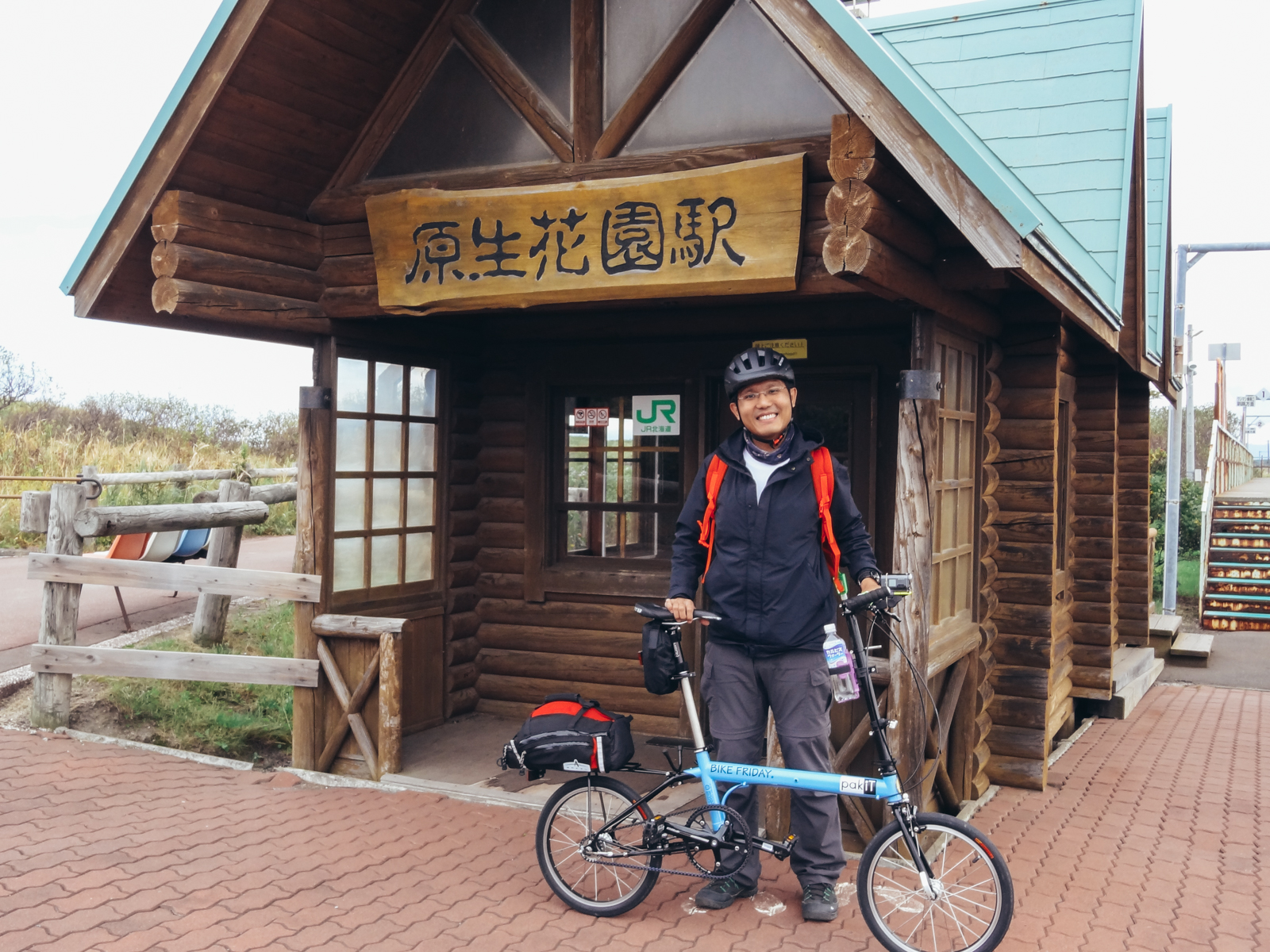 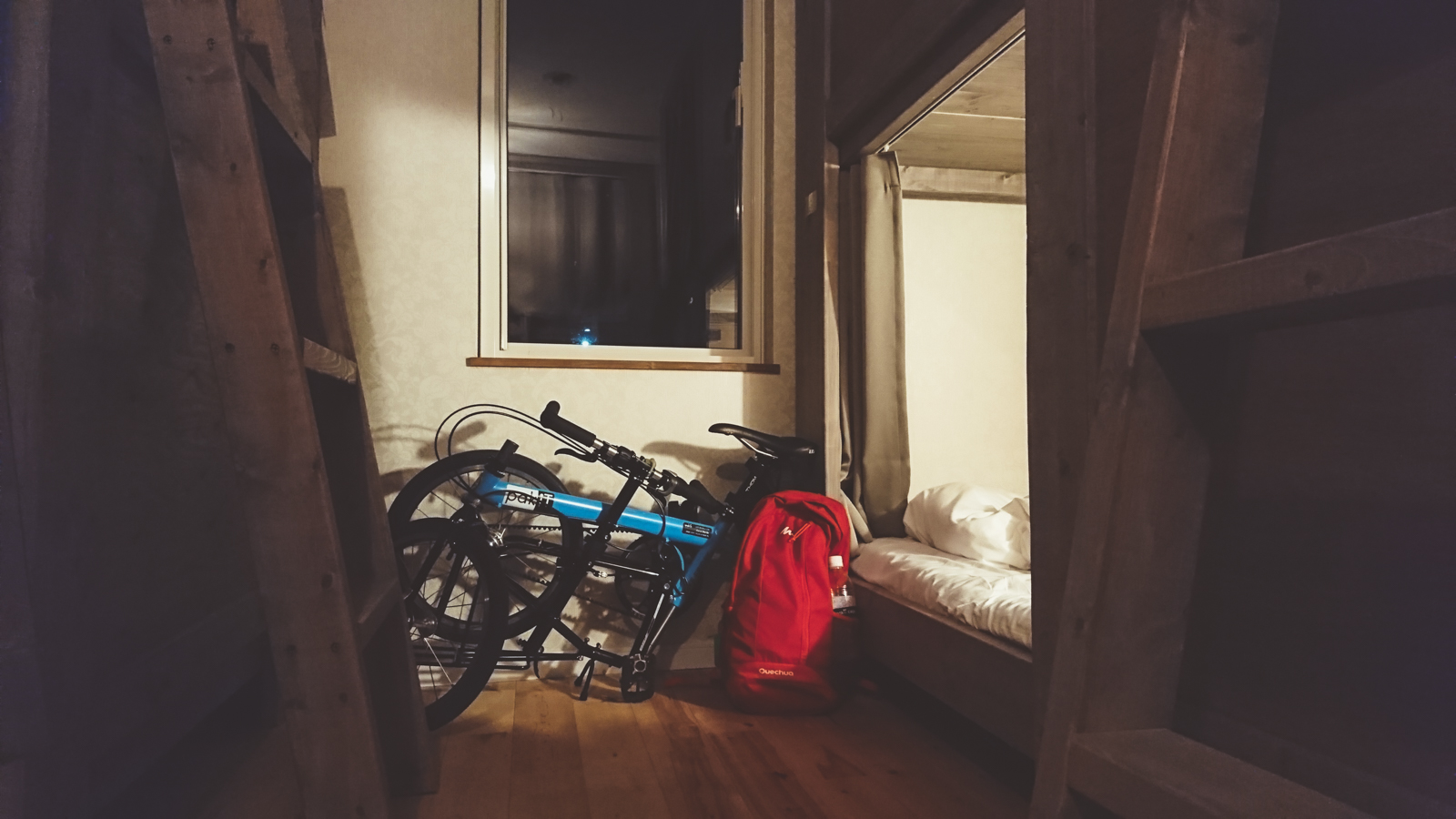 Thankfully manage to squeeze the folded Pakit into the dormitory room just beside my bed. One thing to note about the hostels in Hokkaido is they are really clean and comfortable to stay in. It’s a cold autumn ride, and what better way to end off a day by going to a Japanese onsen in my hostel! 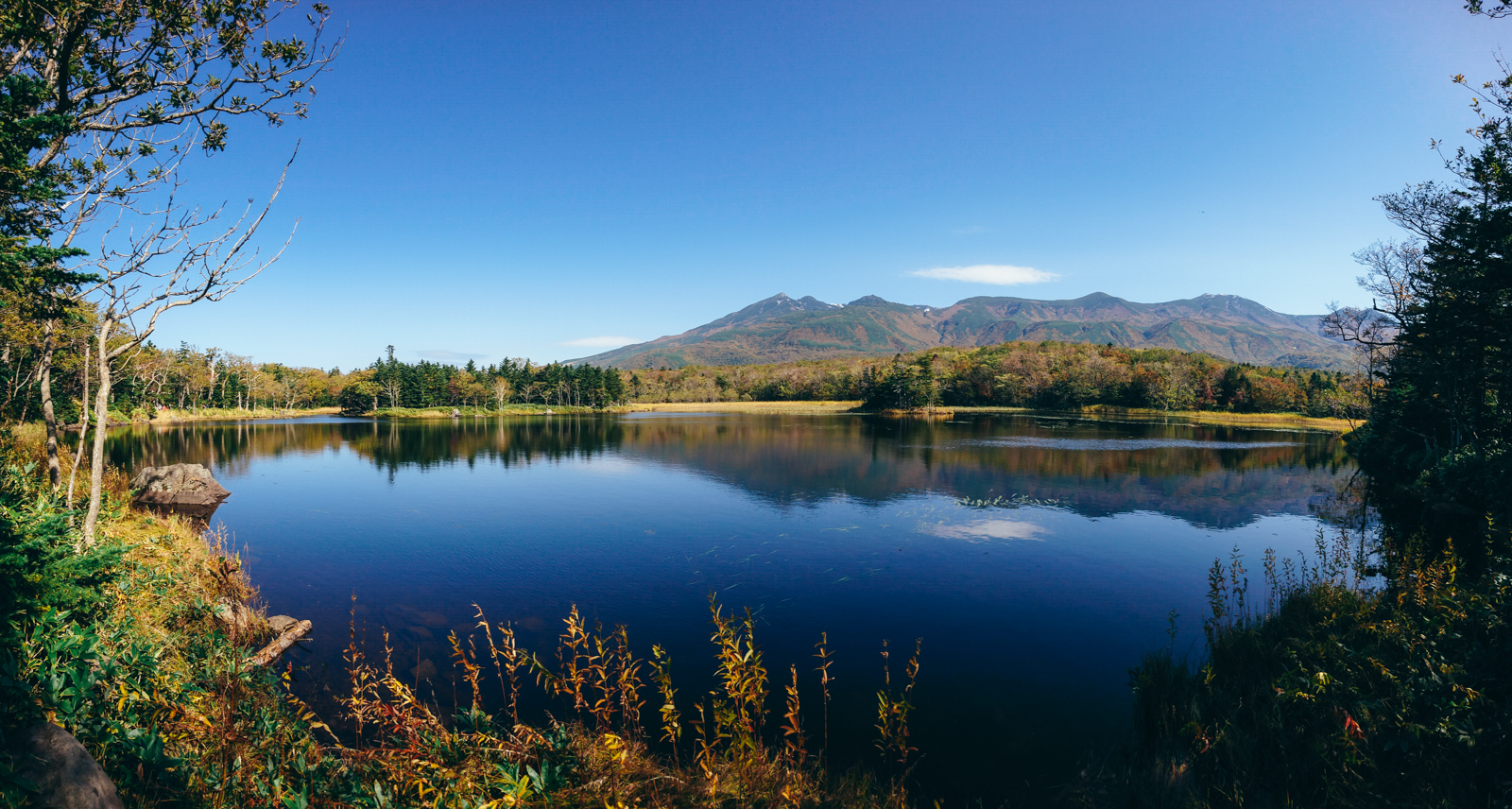 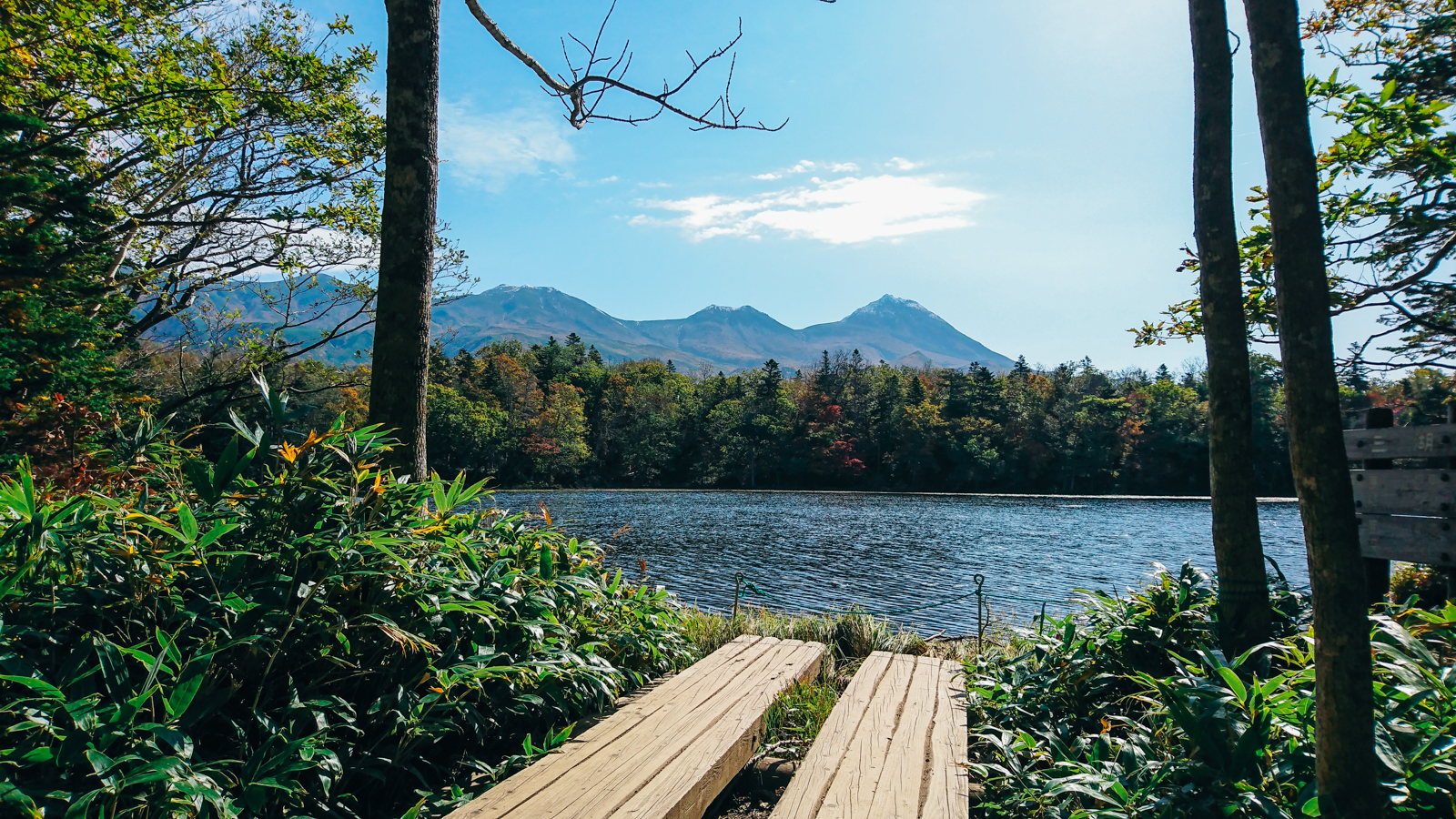 Thus begins the day where it will be a 30km round trip, cycling up the mountainous roads to explore Shiretoko. There are 5 natural lakes in the Shiretoko area (Shiretoko Goko Lakes). You will need to go through a 10min lecture by the park’s staff before u can do the trek, in the event if Ezo bears appear.

No bears were spotted during my trek. Thankful for the good weather and it’s a lovely 2hr trek discovering the tranquility of the lakes and it’s surrounding nature. 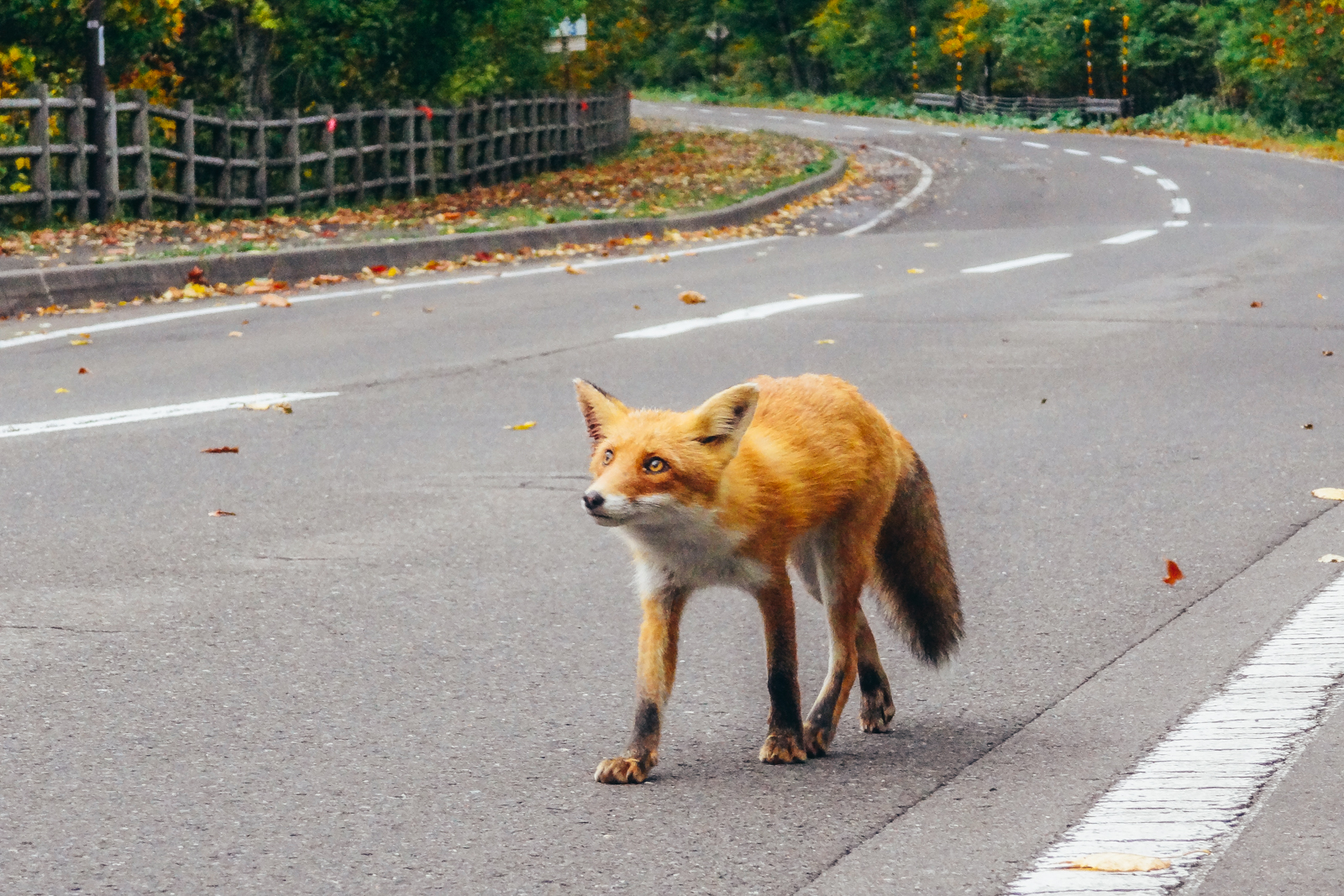 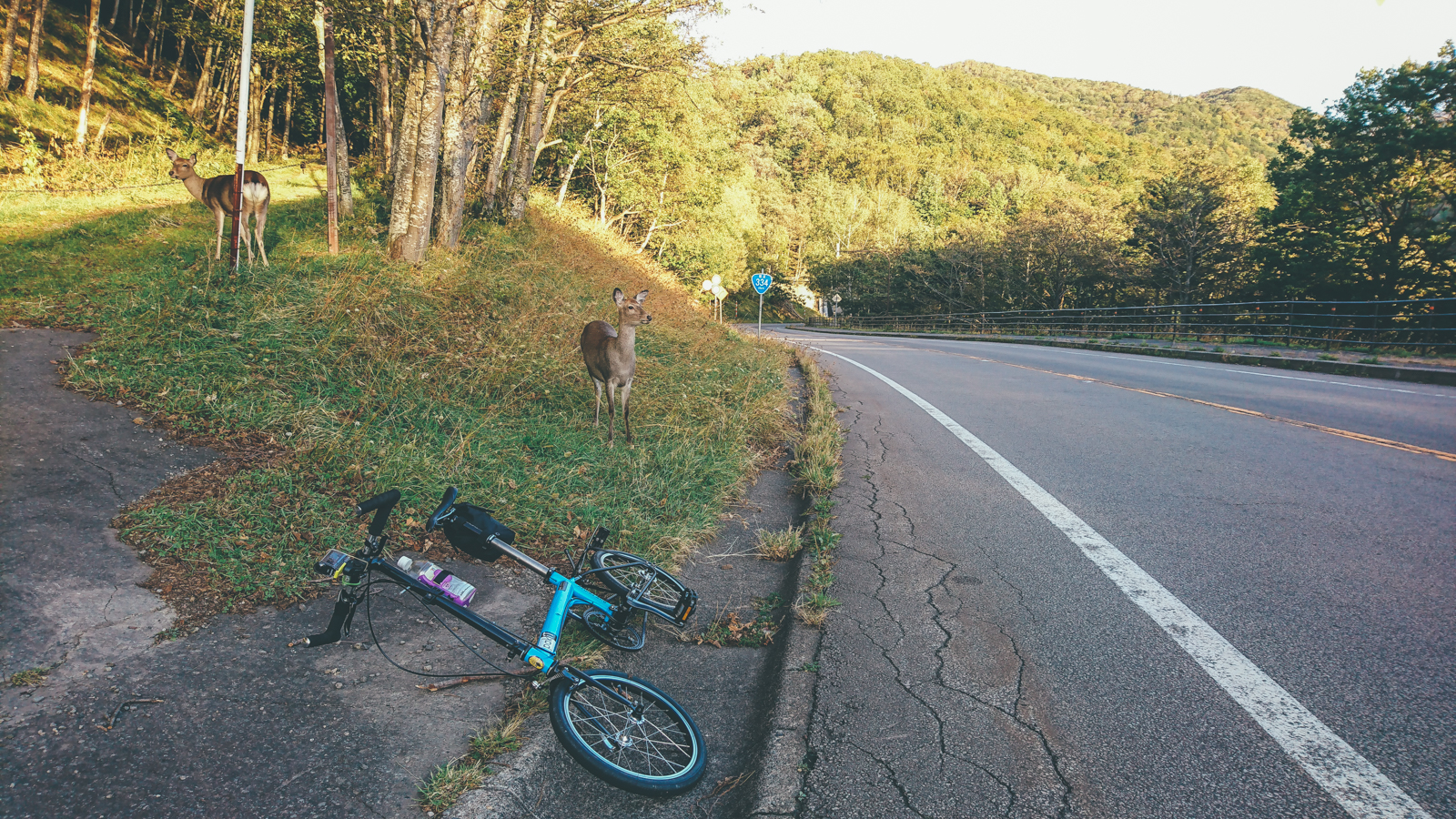 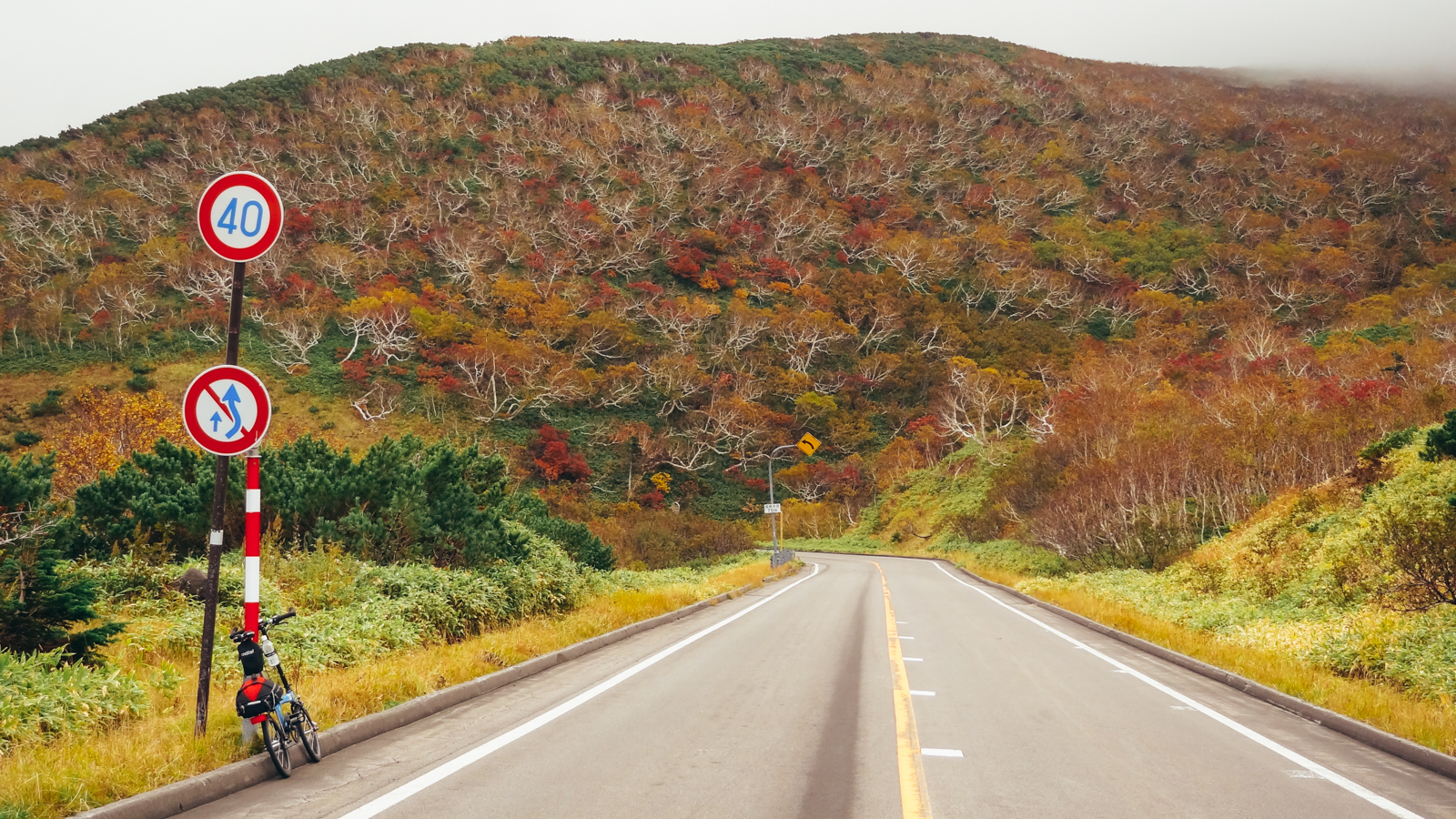 The next day was the major push up the Shiretoko mountain pass, the highest elevation being 700+m above sea level. It’s about a 15km climb before a descent for another 15km to the town of Rausu. 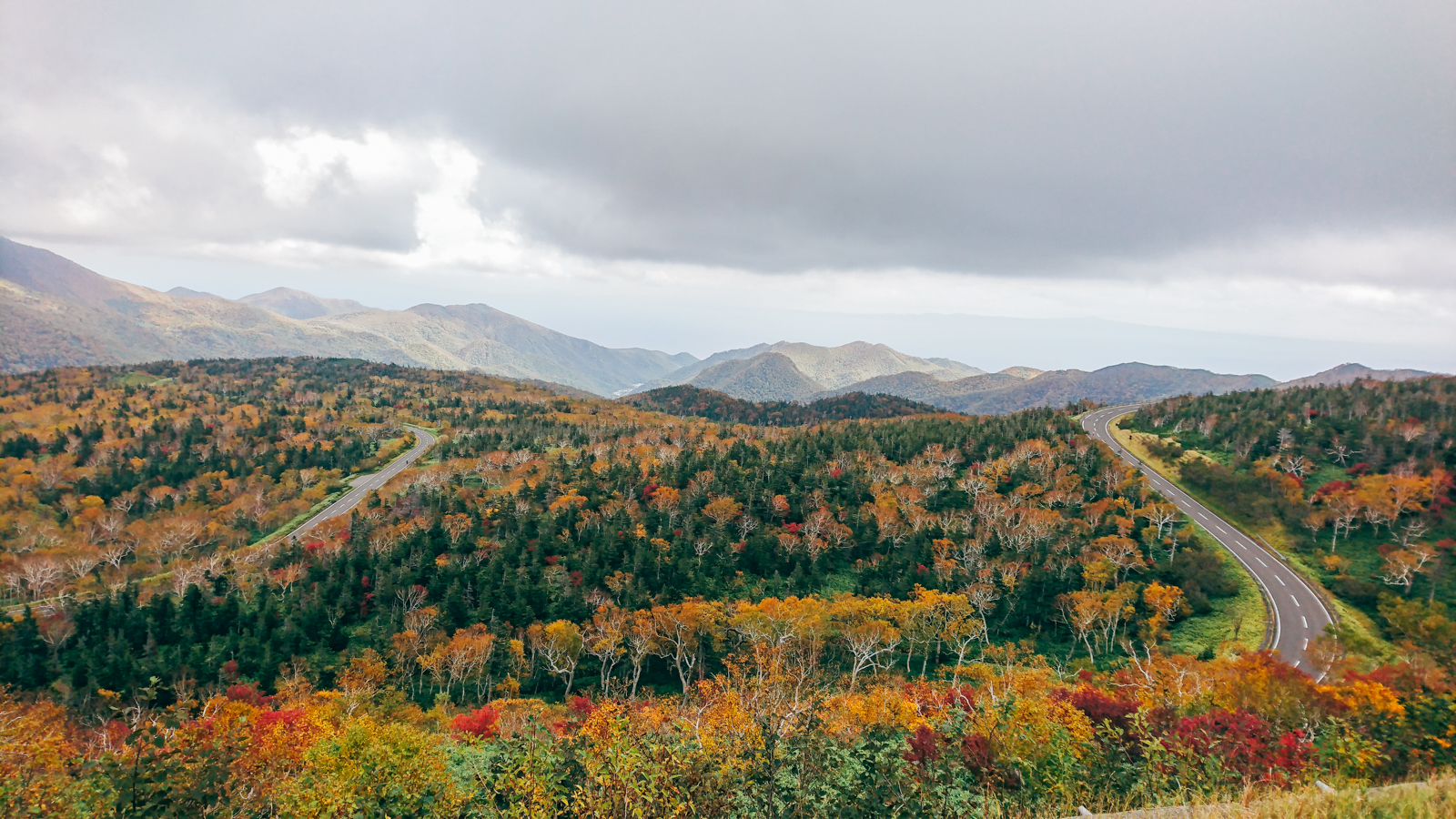 To my surprise the Pakit climbed well, sometimes I was only maintaining on a gradual climb on gear number 2 of the 3-speed hub. As I got higher up in the mountains, the autumn colors were such an inviting sight. The experience of cycling this mountain road was just too beautiful.

Can’t help but to take a hero shot with one of the highest peaks in the backdrop, Mt Rausu. Kinda cold at the mountaintop and I was told to check out a free public Japanese onsen when I am close to the foot of the mountains. 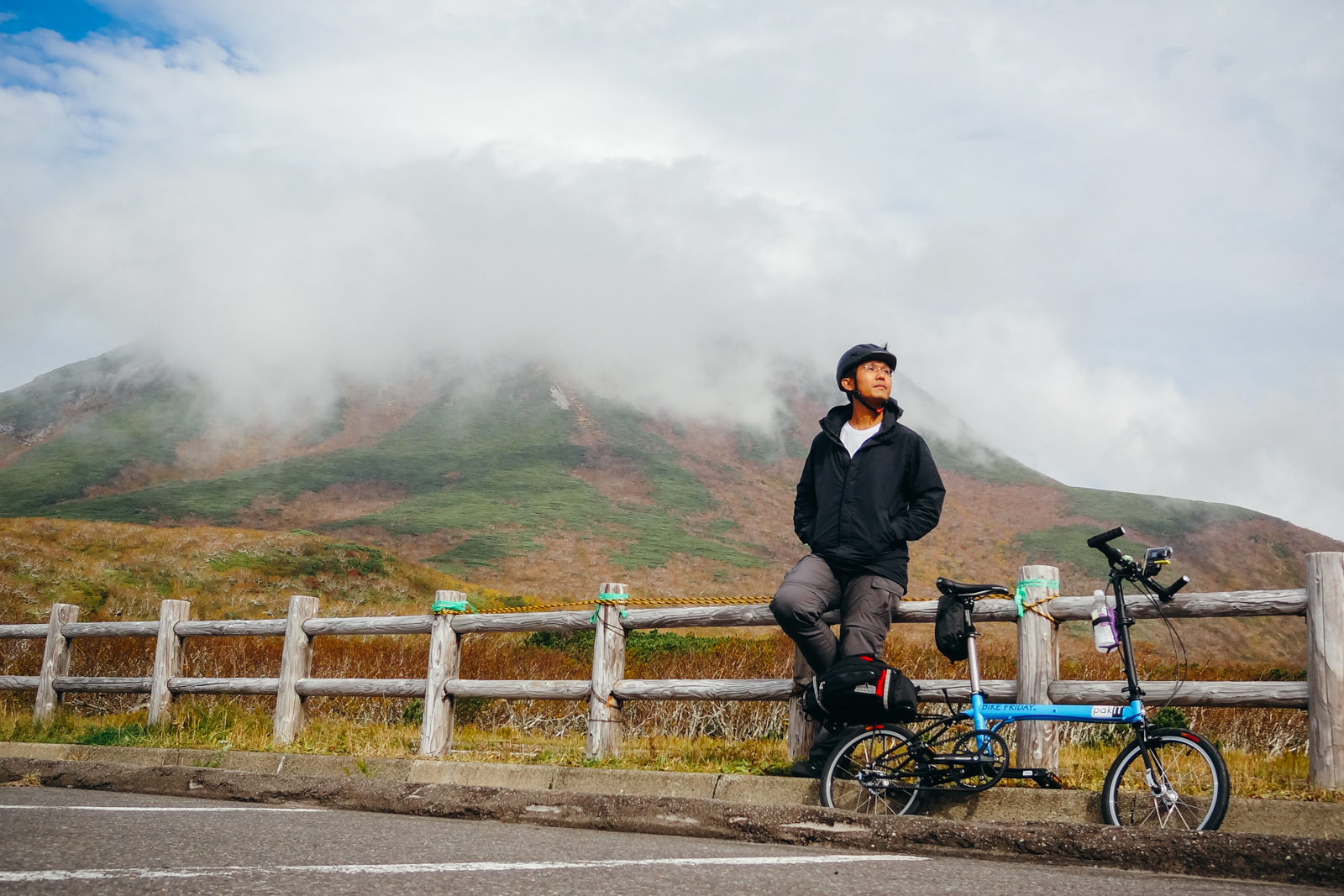 It’s something new for me, as for the guys’ side, you are literally naked and soaking yourself in the onsen in an open space, only shielded from others sight by trees. 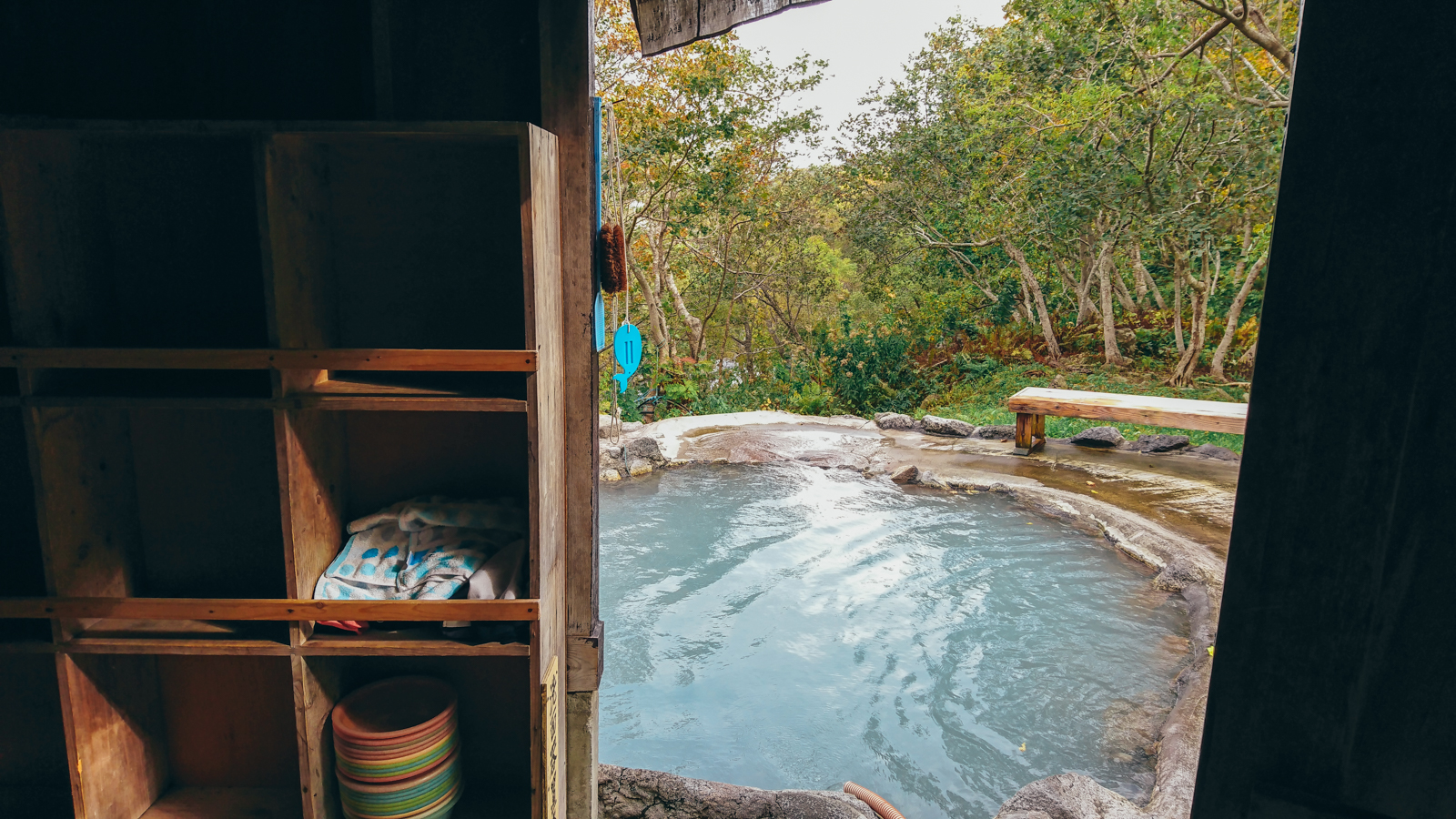 It’s quite fun actually, so since many other Japanese men were inside and it’s a pretty common thing there, I thought I will just join in the fun and have a good hot onsen bath.

Hokkaido is well known for its dairy products. Happened to have breakfast at a rest stop and was very surprised to get a JUMBO milk cup. It’s then cycling through much farmland inhabited by cows in Betsukai. 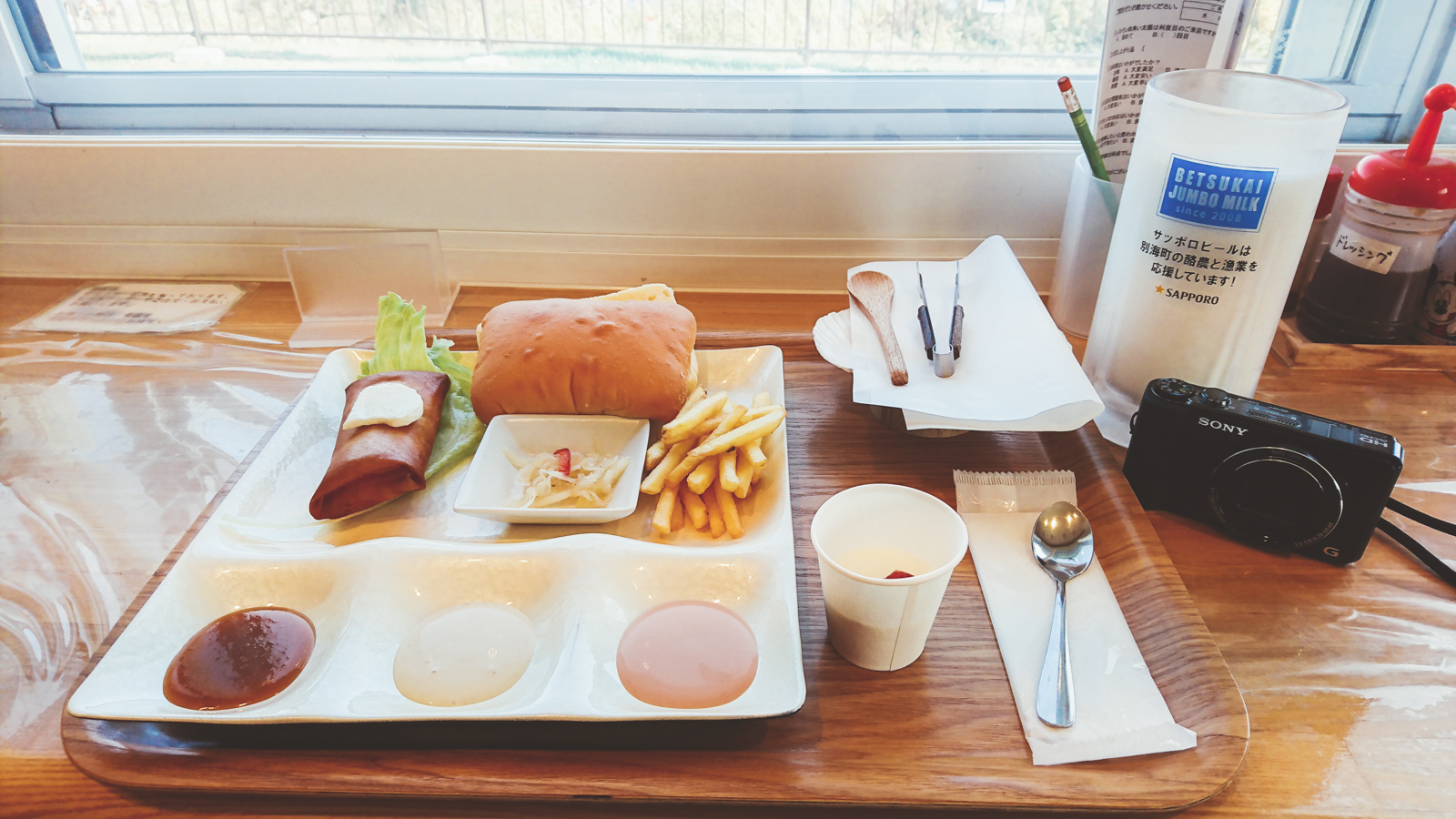 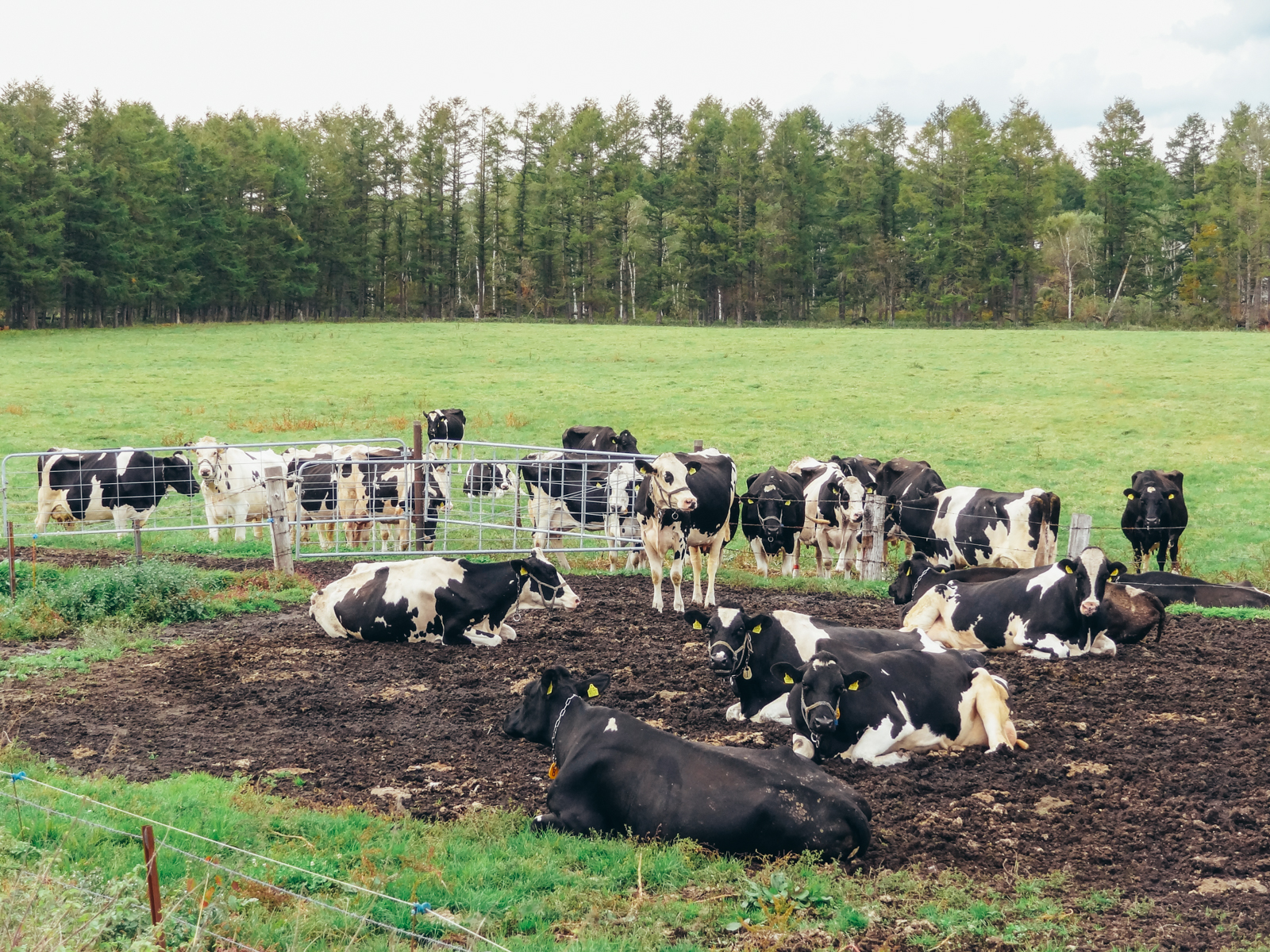 Eventually, this leads to the next major climb up to Lake Mashu, a place I visited back in 2013. Quite unfortunate that it was raining and the entire lake view was covered in fog. Nonetheless, I must say I was still able to handle the steep ascent well on the Pakit. 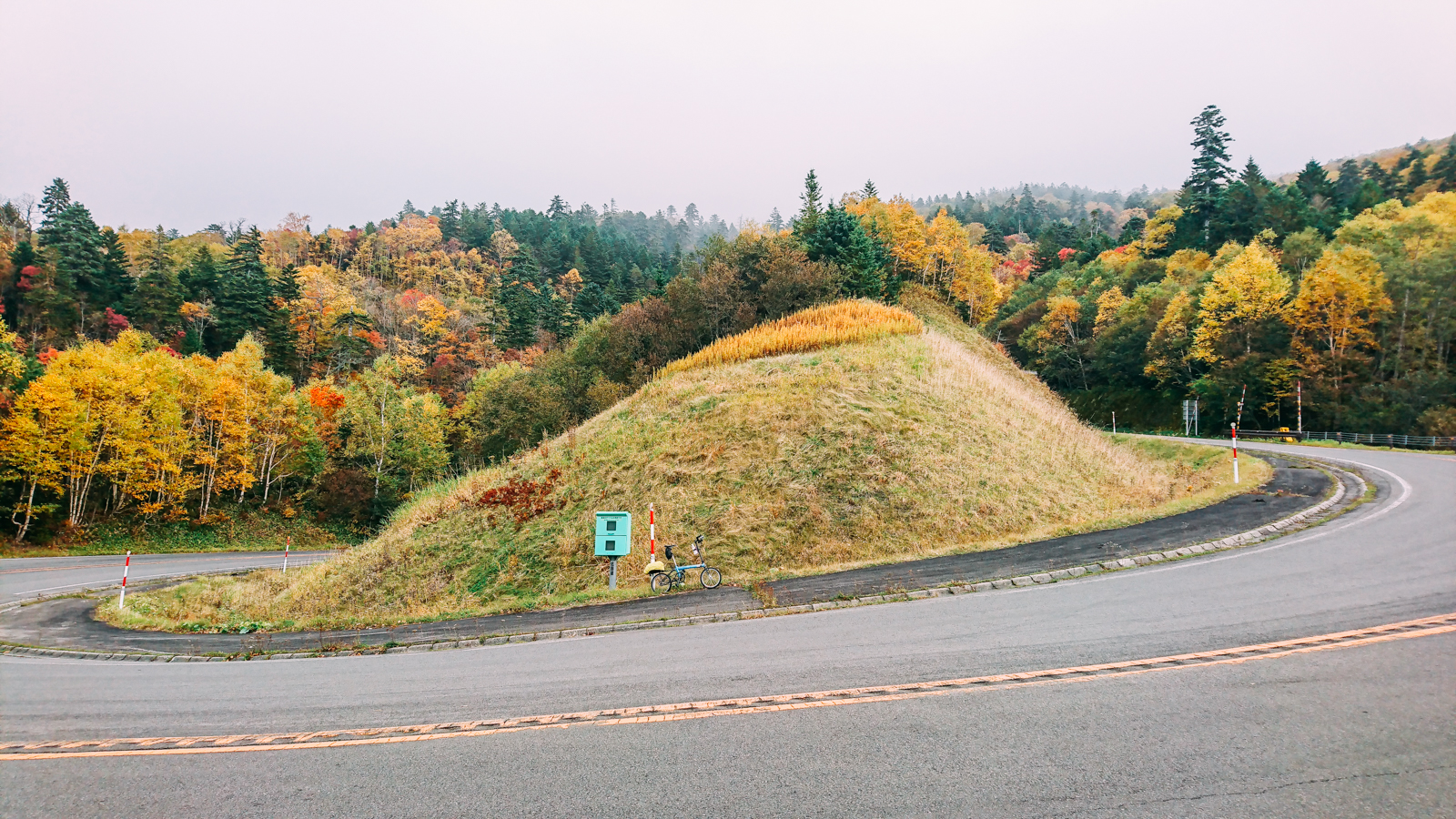 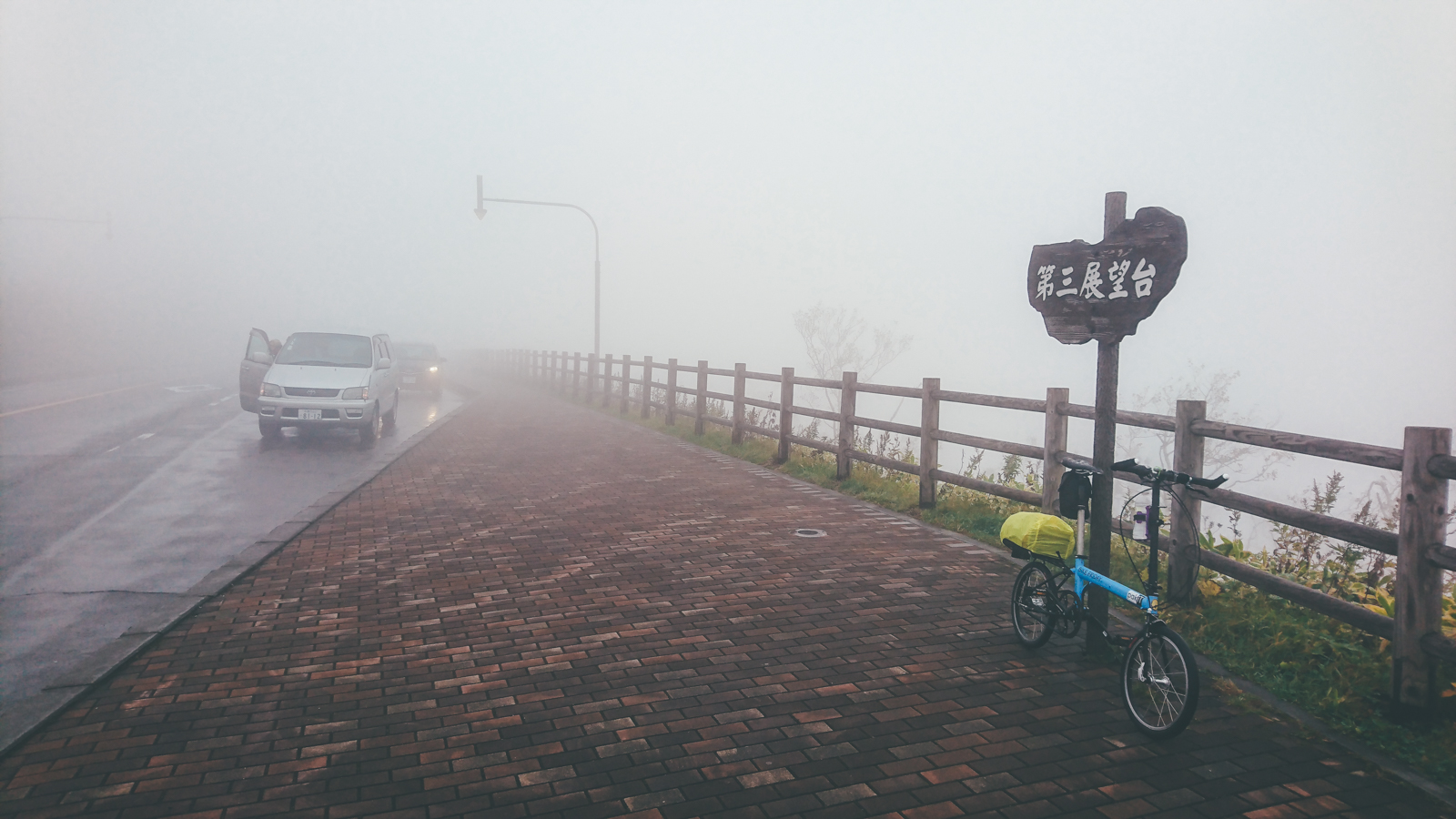 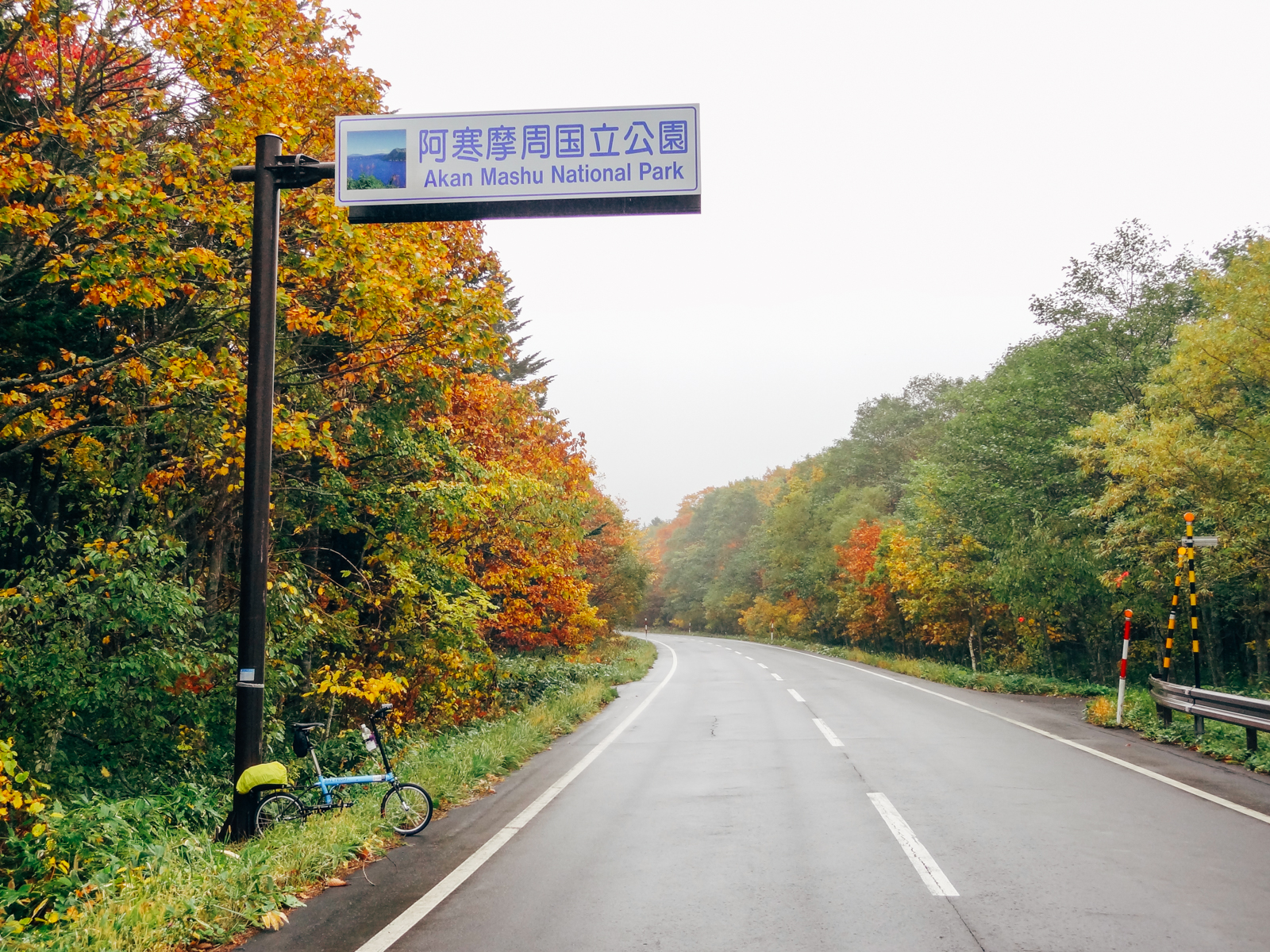 Oh, and those H bars on my Pakit really helped on the climbs as well. Reaching the peak at approx 600+m and once again enjoying much of the colorful autumn foliage, the descent leads me to Lake Kussharo, another place which I have visited before. 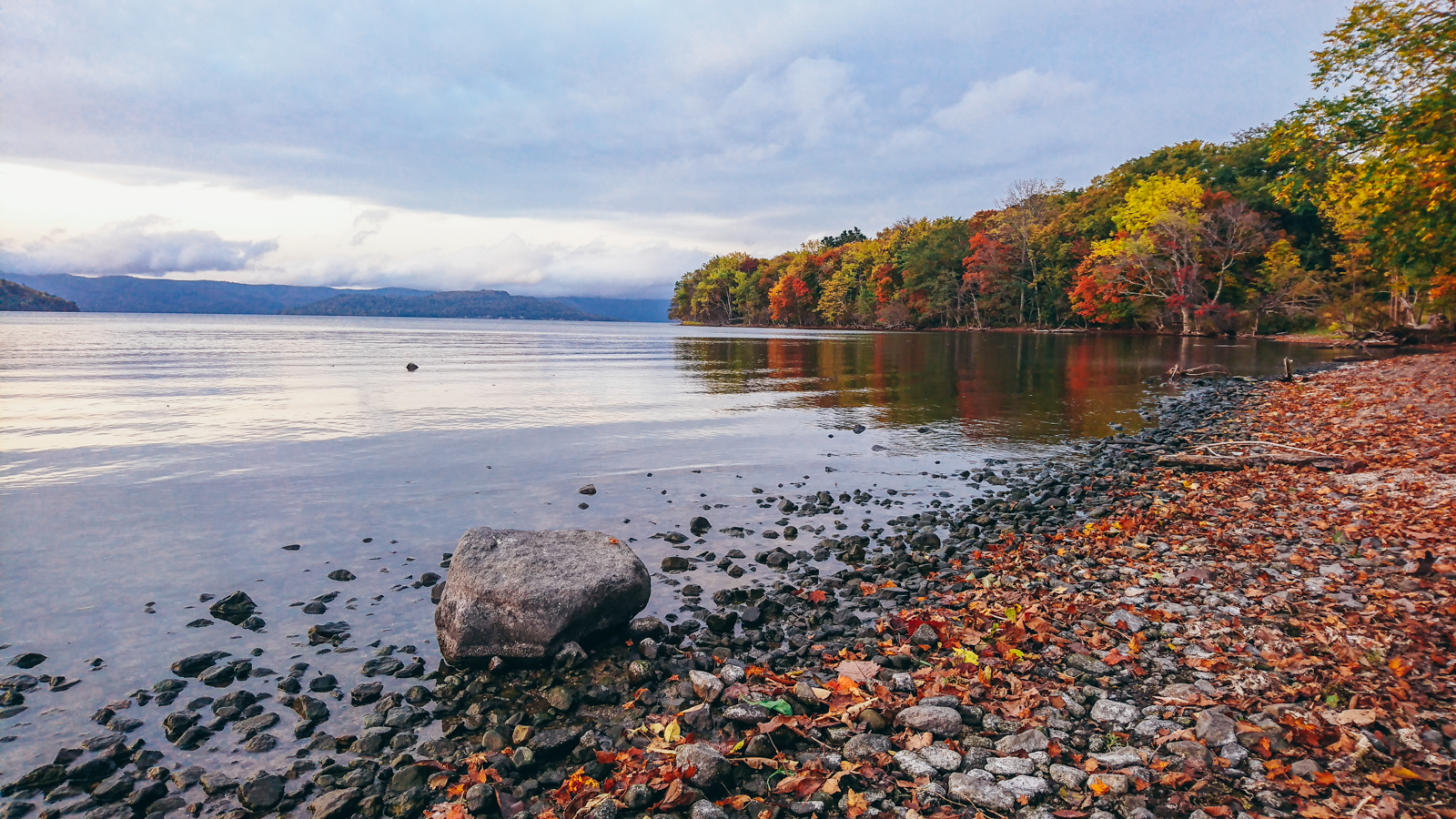 By then the rain has stopped and I was able to enjoy Lake Kussharo in Autumn season (my last trip was a winter season). Then I proceeded to stay in one of the best Youth Hostels that Hokkaido has to offer, Kussharo Genya Youth Hostel. 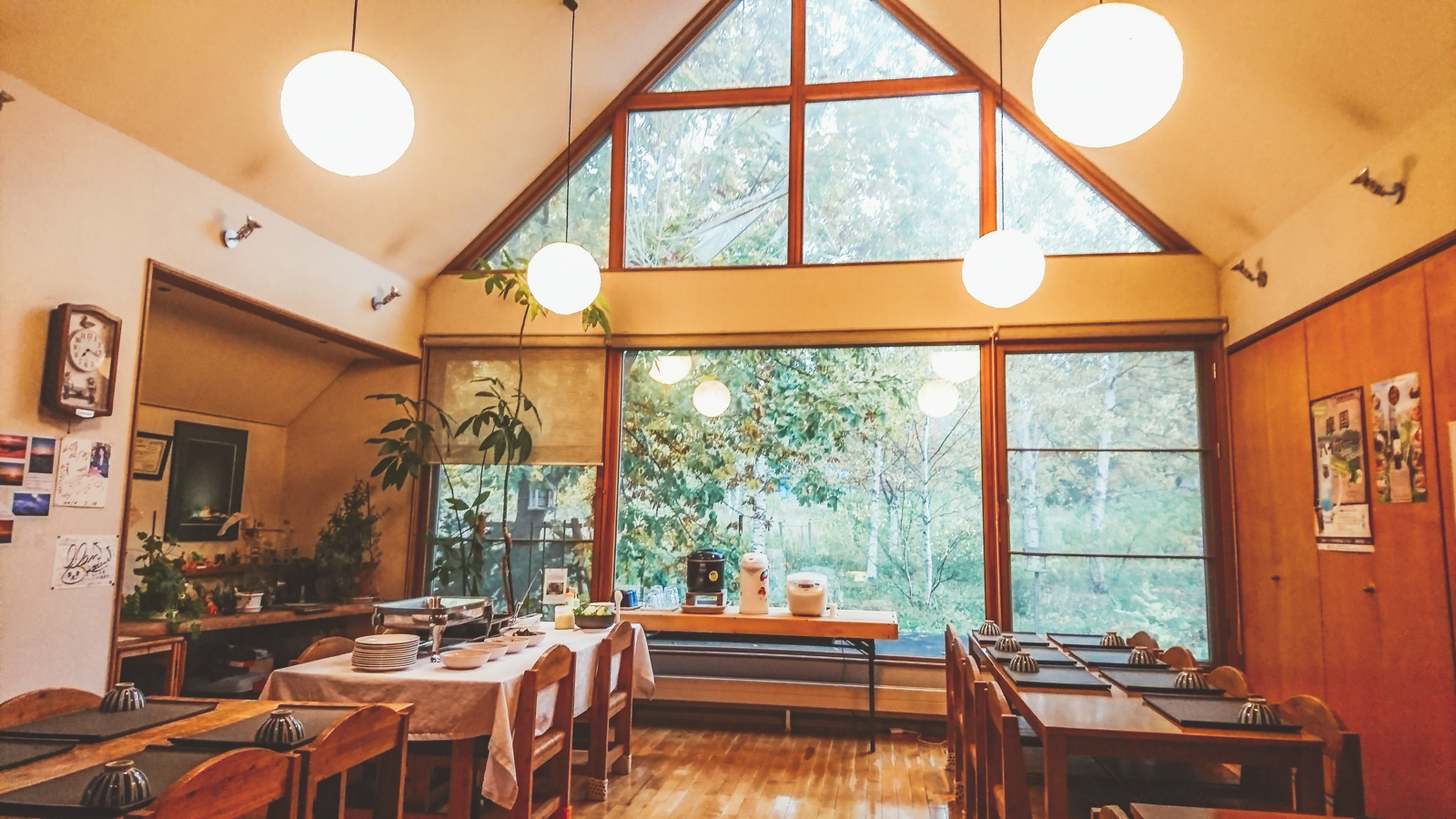 One thing I really like about the stay here beside the cleanliness and pricing, is the very homely feel, nice decor, and wonderful food served in the hostel. 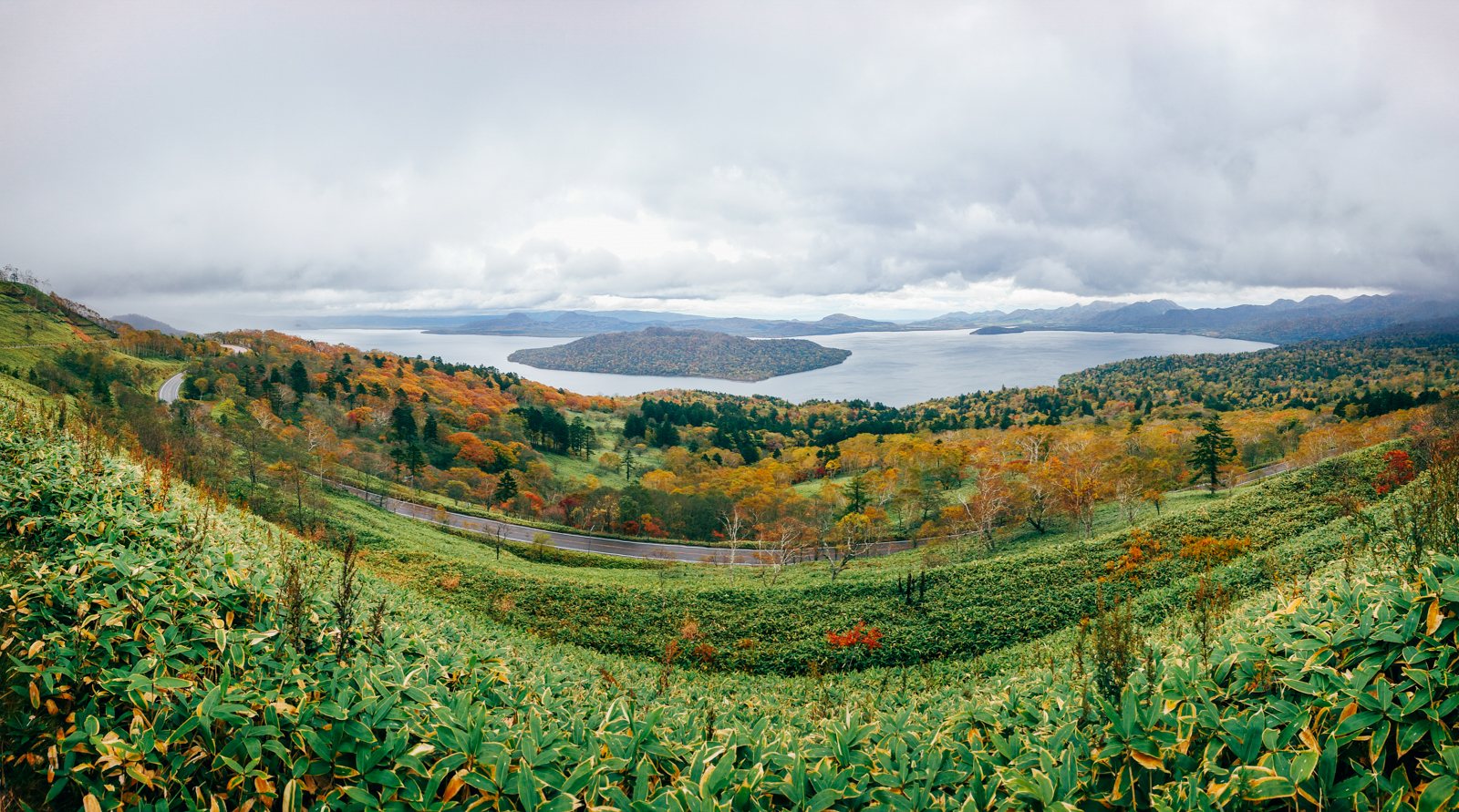 The 3rd and final mountain pass will be Bihoro pass at approx 500+m above sea level, a pass which I have seen on many Japanese travel books. I wouldn’t say it’s a super tough ride.

Maybe because the Pakit is lighter than my Tikit and I had an overall lighter packing for this trip. I realised I was on gear 2 of the 3-speed hub most of the time for this mountain pass as well.

The star attraction of this pass is to be able to view Lake Kussharo from the mountain pass in all its glory. Occasionally the wind, rain, and cold dampened my spirits during the climb, but it was all worth it. 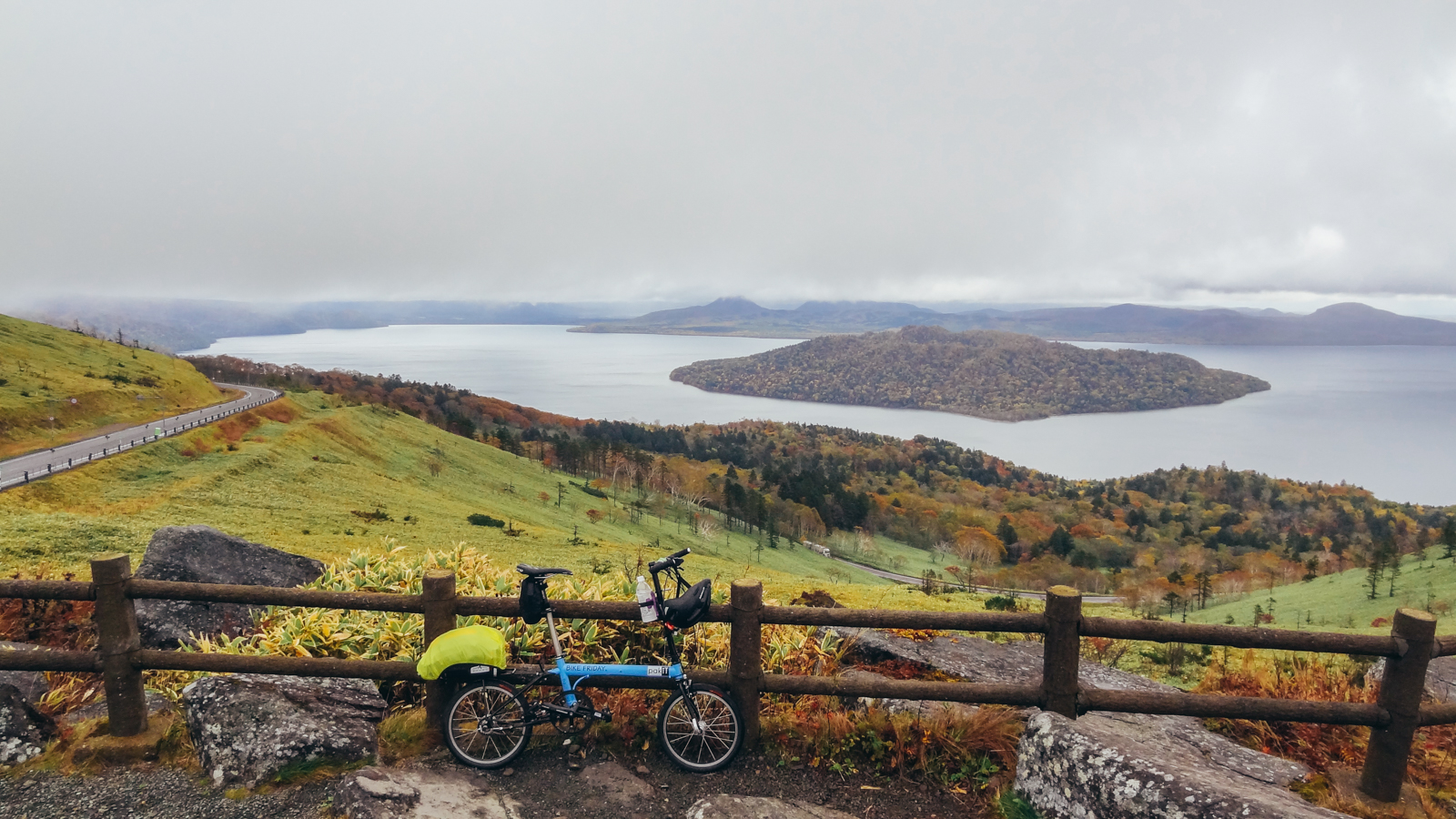 Following the descent from Bihoro pass will be towards more city areas like Kitami and eventually ending with my starting point of Abashiri. An accumulated distance of 570km and an elevation gain of 5700m for this North Eastern Hokkaido cycling trip from 4-12 Oct 2017 on the Bike Friday Pakit.

I think the Pakit held up very well for light touring and the choice of having the Primo Comet tyres helped to absorb most of the road vibrations. No puncture or any mechanical errors of sorts.

Will be back someday again exploring the many unique places in Japan!

To find out more about the route, find me on Strava.

Check out our other articles:
Cycling to work just as effective as going to the gym 5 days a week
10 Things SG cyclists experience when trying out new routes

Aaron is a wedding videographer under his own brand Aaron.Wende & has been documenting sincere & honest moments of a couple’s big day since 2004. He’s involved in TV work, events documentation & corporate videos as well. He’s someone who loves to go on an adventure, backpacking & trekking. A trek to Gunung Rinjani in 2009 turned out to be a unique visual experience where a photo he took of trekkers witnessing a volcanic eruption helped him win the Grand Prize Award in the 2010 National Geographic Photo competition. His desire for adventure & exploration has expanded to 2 wheels and has thus grown a fond interest in self-supported bike touring. His photography cycling expeditions includes cycling from Seoul to Busan in Winter which was his very 1st solo cycling expedition. Others included Taiwan Round Island, Fukuoka to Hiroshima, Tasmania, and a tour round Iceland spanning 2000km.