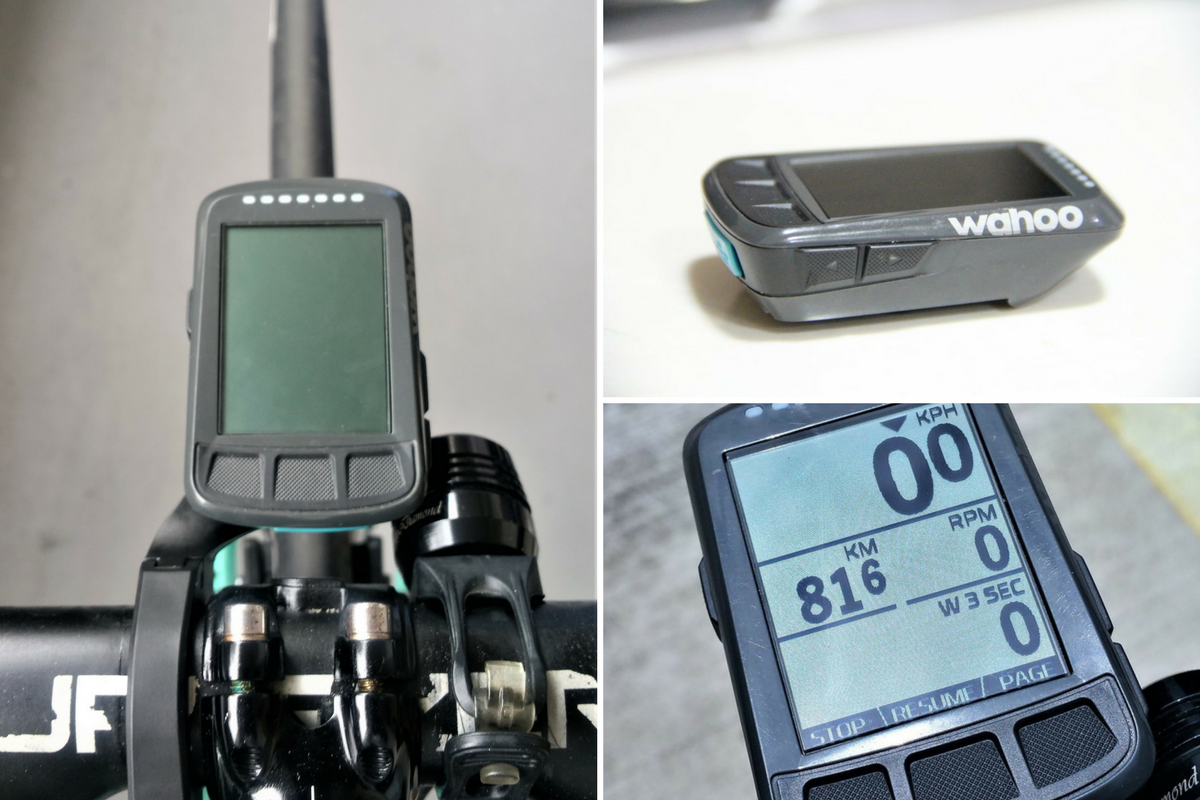 While there has been a number of competitors to Garmin, it’s not till these couple of years that we see a brand that could potentially give Garmin a run for its money. It’s none other than Wahoo. Earlier this month, Entro Cycles has generously provided me with the Wahoo Elemnt Bolt to test out and it’s quite the nifty product.

This one’s for the guys out there who might be looking for something different! So, without further ado, here’s my full review.

Wahoo Elemnt Bolt: What you get

In the box you’ll get an out-front handlebar mount,  standalone mount, some zip-tie cables, manuals and a micro USB cable. 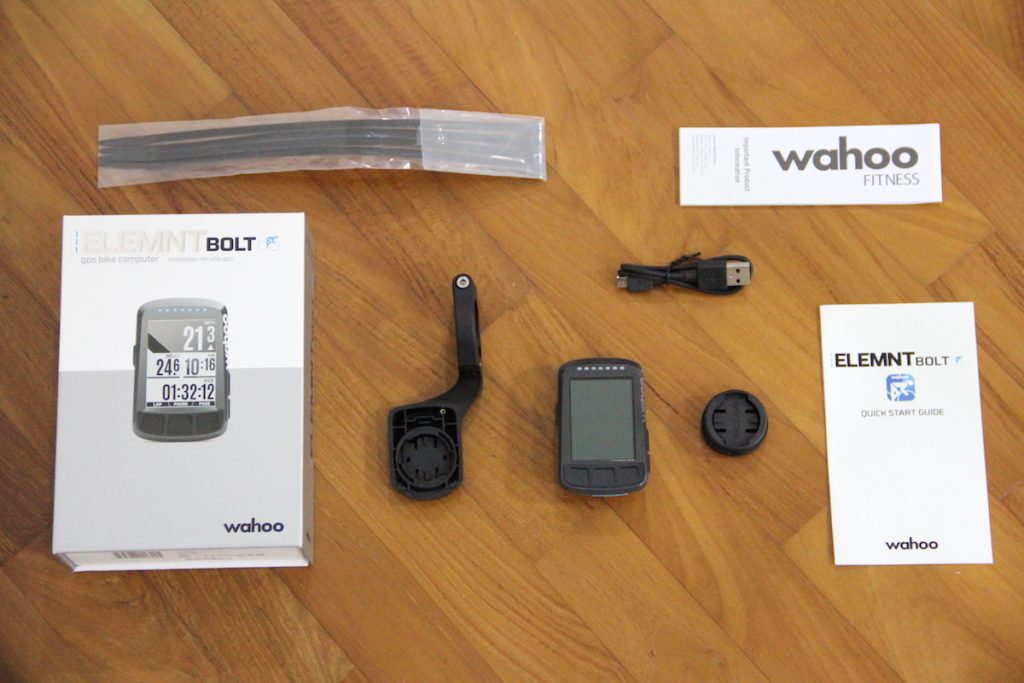 Weighing at 56g, the 2.2 inch display of the Wahoo Elemnt bolt, is not a touchscreen model. It has 1 main ‘power’ button on the left, 2 on the sides and another 3 at the front; just below the screen.

If you look long enough, the pads do look like those speaker net mesh. Note that no sound will come out from here. :p 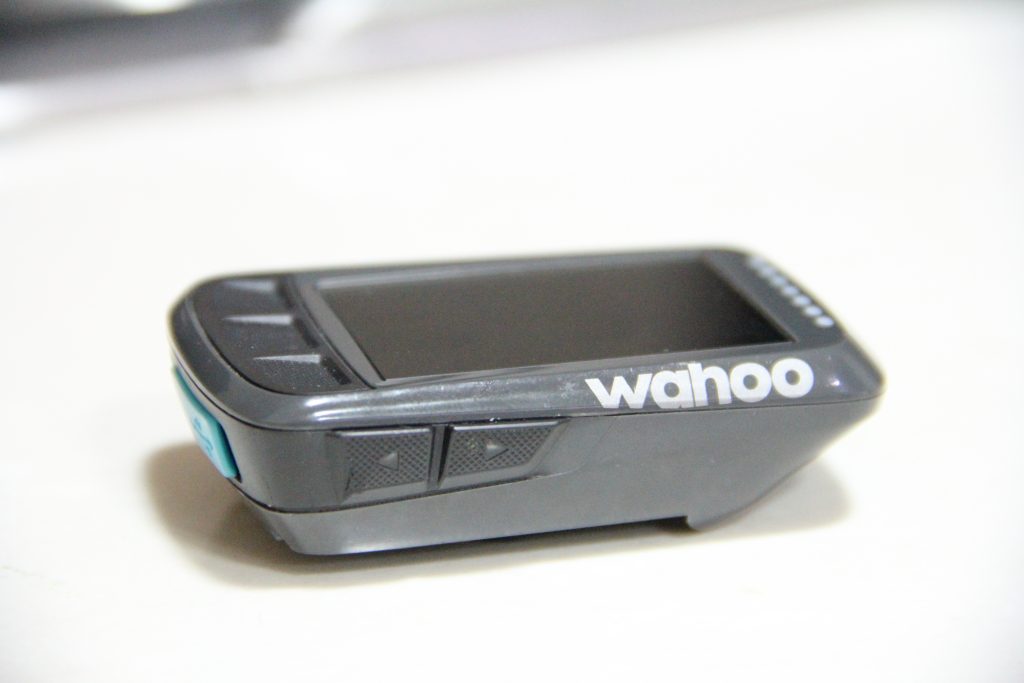 The buttons at the side are very sturdy, while the buttons ‘pads’ at the front are softer and more ‘rubbery’.

There is a LED light indicator at the top and at the bottom, a blue rubber cover protecting the USB port.

The Wahoo is compatible with both Ant+ and bluetooth 4.0 connectivity and is rated IPX7 waterproof.

If you are concerned on how to set up the Wahoo for your TT/Tri bike, not to worry. You can purchase one through their website here.

Using a 3mm allen key, you can screw in the out-front mount. Anything else, you can use the standalone mount.

A cool feature with the Wahoo is the small hole just bellow the bluetooth label. What it does is allow you to screw the Wahoo into the mount to prevent from it coming out.

Pretty useful I must say – especially if you are riding on the trails, and also help to prevent thieves from snatching it discretely!

It’s clean aero setup on the bottom side, but from the front, the two stem bolt is still exposed.

Maybe you can try tilting the mount up to make it more aero. This is probably due to its smaller size, compared to its bigger brother, the Wahoo Elemnt.

Wahoo has made a companion app that can make the cycling computer fully customizable. The app is available in both Apple and Android OS. You cannot change much from the Wahoo itself, so you WILL need the app. Let’s run through it.

After downloading the App, you would need to connect the Wahoo Bolt through bluetooth with your phone. 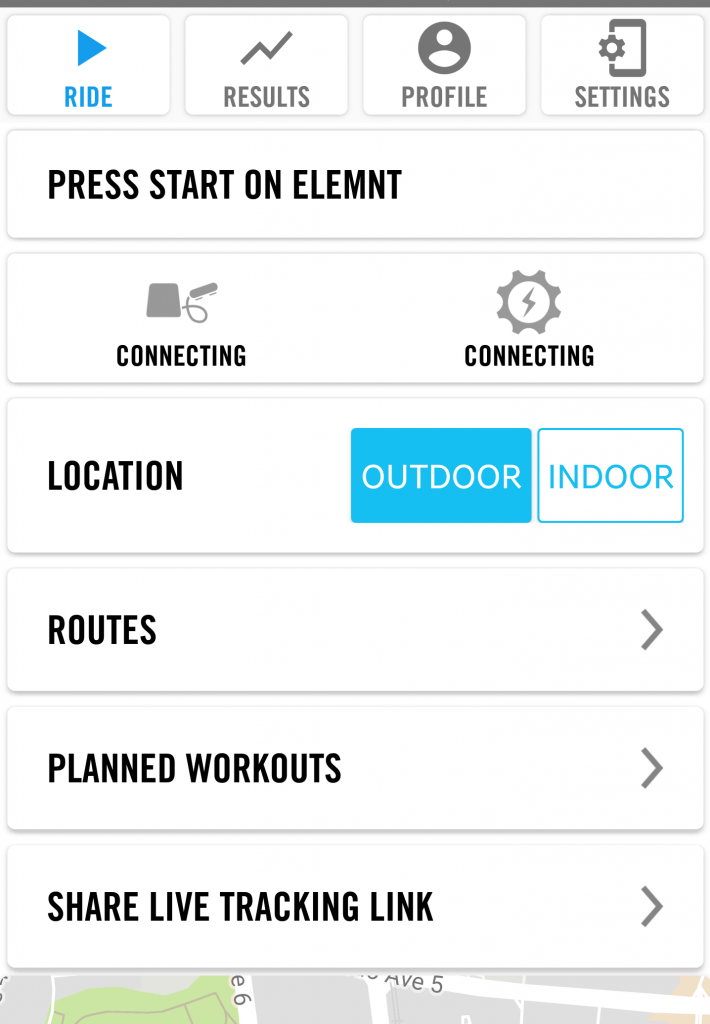 The first tab is for the ride settings. The app will prompt you to switch on your GPS and it will show in the map. Since I have a trainer at home, I’ll probably just use this page to toggle to ‘Indoor’ for my trainer workouts. The others features will be less utilised.

At the results tabs, it will show your ride history and some basic information of the ride. So after clocking some mileage on it, here’s how it would look like.

Since I’ve already done some rides, will sidetrack a bit on the rides done AFTER the setup. Similar to Garmin Connect, when you click into a ride, you will get to see more detailed data and graph showing anything from speed, time to power.

Moving on to the Profile tab, you can key in your basic information, such as age, height, weight and date of birth. Scroll downwards and you can also input in your FTP and Heart rate zones for training.

After which, you can link the Wahoo account to other cycling platforms. You will be happy to know that there are plenty! 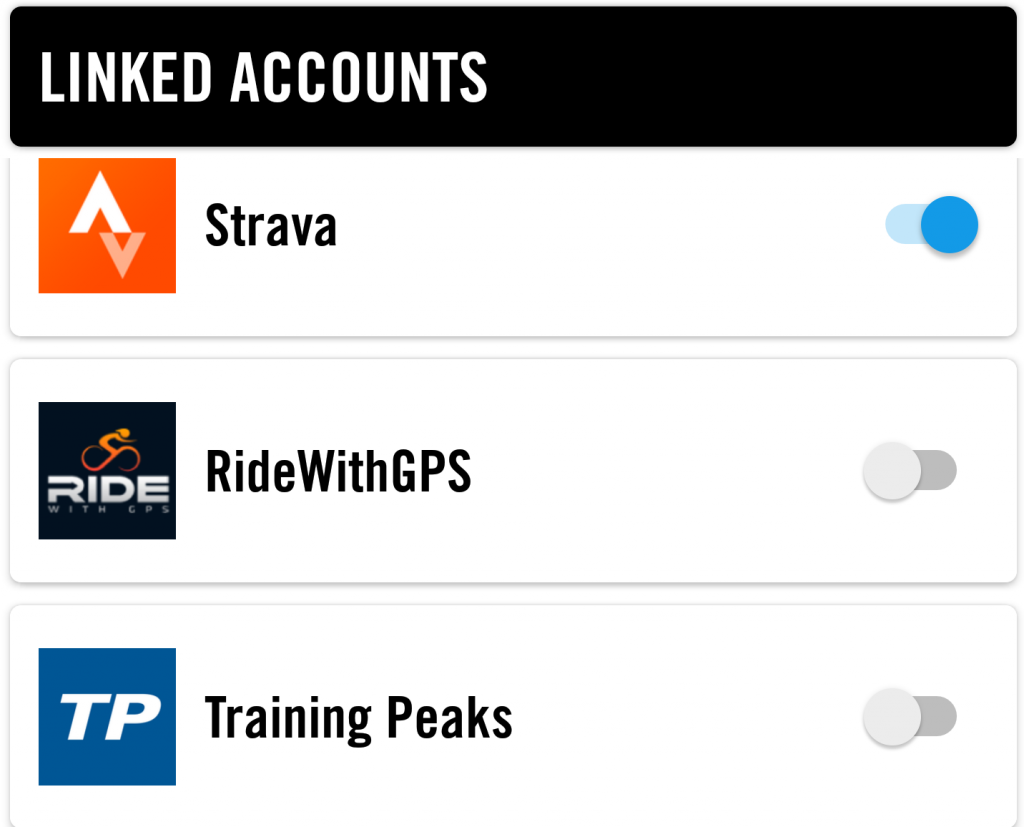 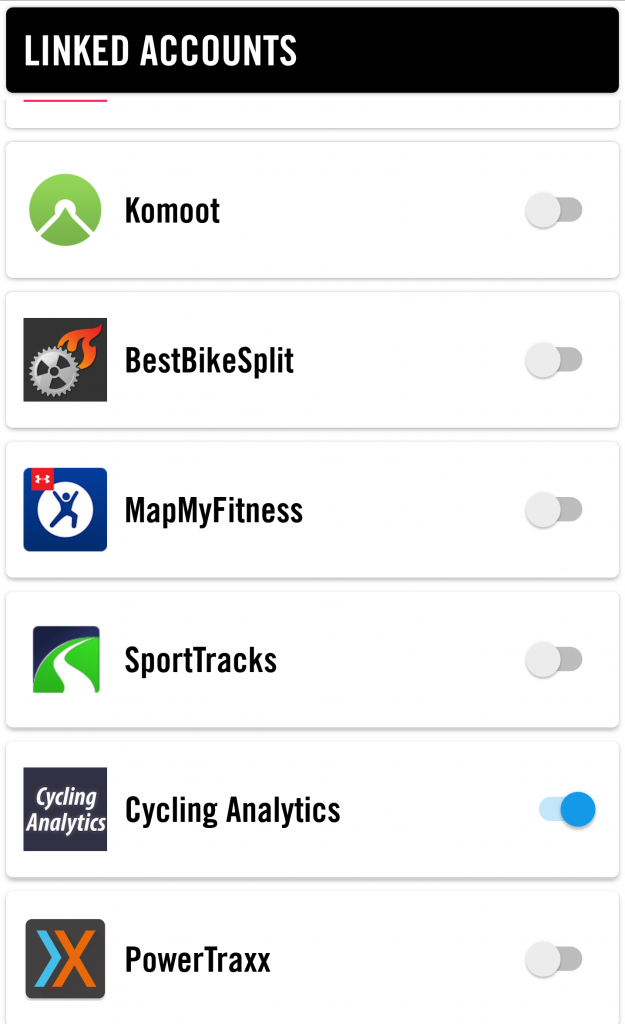 Last but not least, the Settings tab. 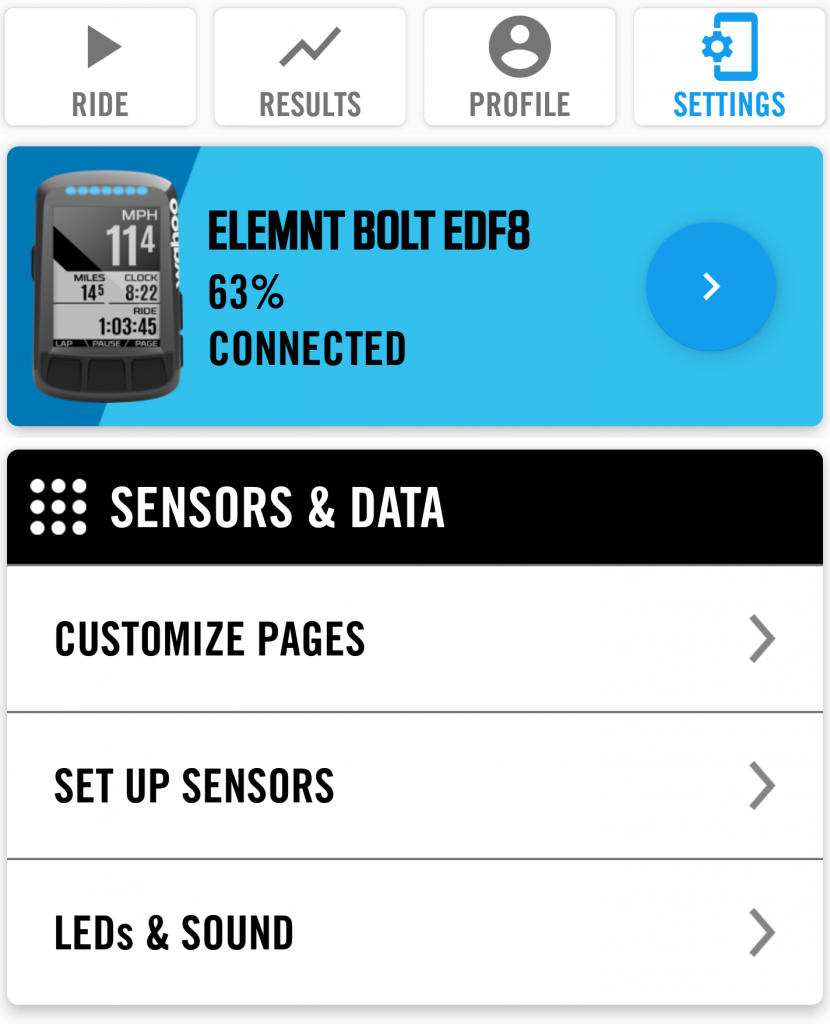 Under the ‘Customize Pages’ is where you set up the data pages. Here you will be impressed with tons of data options!

You have variances for Speed, Cadence, Distance, Time, Map settings, climbing data, weather, power and heart rate just to name a few. For example, just from Power alone, they have more than 100 data fields!

There are already some default pages, which you can turn on and off. If you click the ‘+’ sign’, you will be able to name and create your own page; as shown below.

Setting up the sensors was easy. I have my speed sensor and power meter set up. If you have many sensors, other power meters on another bike, or just sensors from your trainer, you will be relieved to know that it won’t be a headache.

You will be able to name each sensor so that can help to keep things simple. With the on and off settings, you can easily set up the Wahoo to recognise the right sensors for the right bike. Brilliant!

Starting out with the display, I am very impressed by it. The contrast is really really good as you can see from the images below.

Any condition – be it under the hot searing sun, poorly lit-ted roads or darkness – you can still see everything clearly. It does not have a brightness setting, but who needs it when you already have this quality.

What about the GPS? It is superb! Takes about 15 seconds to capture. By the time you cleat in, and slowly spin out of your residence, the GPS would have already prompted you that it’s ready to go!

Basic, starting, stopping, pausing and ending rides are all done by the front buttons. If you switch on the sound, the Wahoo will beep every time you move off or pause.The main power button on the left goes to another menu or return back if you click it again.

The 2 buttons on the right are commonly used to toggle through options. Apart from that, you can use it to zoom in or out for the map pages; or add and remove data fields in those pages with data fields.

Touching on the Quicklook LEDs indicators, you can choose to set it up for speed, power or heart rate.

For speed, once you set the desired speed, the LED will light up to tell you if you’re slower or faster. Pretty helpful if you have speed objectives for a certain climb, for example.

It’s different though for power and heart rate zones. After you set up your zones as I’ve shown above, there will be different colours and number of LED emitting; depending on how hard you are going.

I say this is really good for doing intervals where you don’t have to look for the number. The LED tells you if you are in the right zone!

The LED light is a nice additional touch, however the glaring midday sunlight can easily mask the LED indicators. For conditions like this, you would have a hard time if you are relying on it.

Being in an urban city like Singapore, stopping at traffics light is common. Unfortunately, the Wahoo does not have a custom speed pause setting. It’s either on or off.

So, it will stop when you are not moving but, takes about 3 seconds for the computer to pause when stationary. So, expect notification or the ride resuming and pausing every time you are inching forward at a junction.

Another common thing during a long ride is the breaks. The good news is, you can just switch it off and the ride would not be deleted. However, you might want to prepare a number from Maroon 5′ (‘Wait’); before continuing your ride.

It takes some time for the computer to continue the ride from where you last stopped. I find that the longer your ride was recorded, the longer it takes to recover the ride as shown below. It can be as long as a few minutes. Make sure your friends don’t leave you behind! 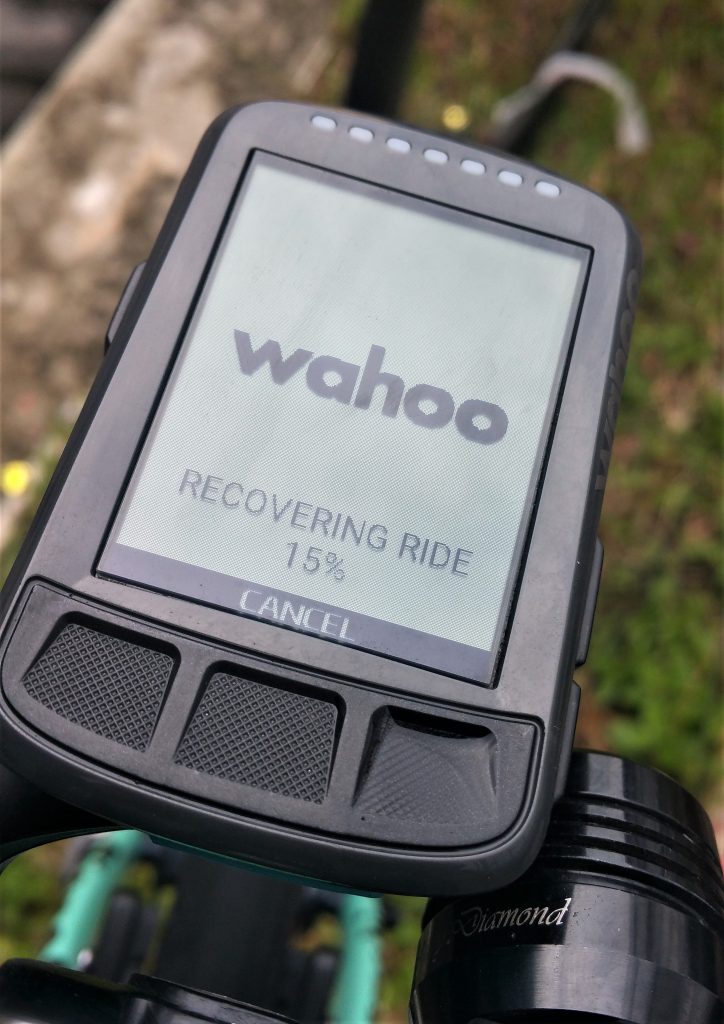 How’s the battery like then? It’s excellent. I recorded 4 separate rides with a total usage time of about more than 10 hours and there was still about 31% of battery life.

A long 5 hours ride brought the battery level from 100% to 69% only! Any-who, you can recharge it with a micro USB cable once it’s low.

At the end of your ride, a Summary will be shown for you to go through if you like. The Wahoo Bolt can be connected directly to your WIFI at home, so that it can auto-upload your ride.

However, it only worked for me once and the rest of the time, I had to manually connect to the app and wait for it to upload into the App. Below is an example of your ride successfully uploaded.

There are still many other functions available with this cycling computer.

However, I decided that it was best to separate the ‘likely used functions’ in one article and the others in another so that it’s not too much to digest at one go. So remember to look out for my next article soon!

The Wahoo Elemnt Bolt retails at $399 and can be purchased at various LBS here.