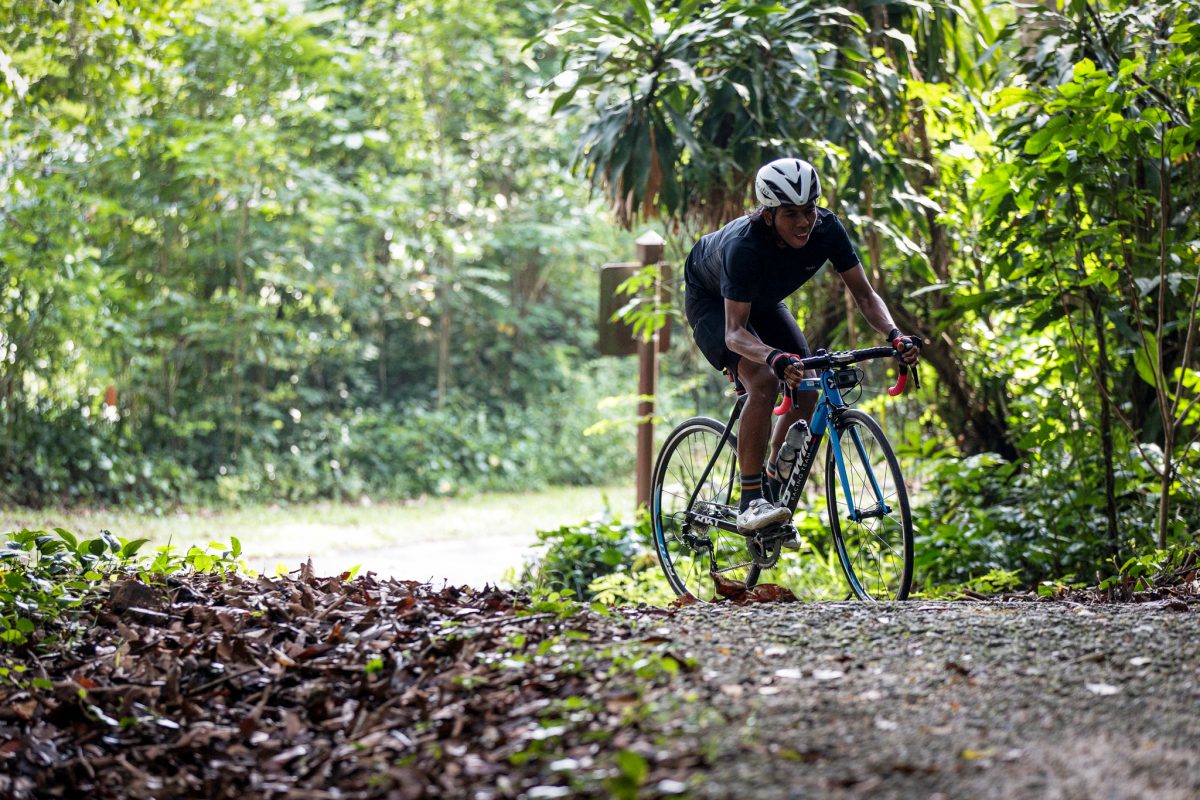 Just a few weeks before the 100th edition of Paris Roubaix, I was invited by Christopher (Chris) from Rapha Singapore, to join him for Rapha’s ‘A Day in Hell’ ride.

So instead of the usual 4 hours on a Sunday morning, I got myself decked in Rapha’s kit for the event. To challenge myself even further, I went with a BTWIN aluminium bike.

A Day in Hell: The route

Organised in lieu of the Queen of the Classics, Paris-Roubaix, Rapha’s ‘A Day In Hell’ is done worldwide – not just exclusively to Singapore.

A tribute to the chaos and the cobbles of the Queen of the Classics, Rapha’s A Day in Hell route takes on Singapore’s toughest local roads and trails where few drop bar bicycles would venture.

Other countries like, Taiwan, France and Thailand organised their version of ‘A Day In Hell’ too; with whatever terrain that is available to them. That doesn’t mean that some routes are easier than the other though.

Here’s a glimpse of the route that was taken:

A good 30+ riders gathered before the break of dawn at Macritchie Reservoir carpark. Chris then passed us a briefing card as a reference for the route before rolling at 7 am.

The route tackled a selection of tough gravel sections and trails before finishing at Sarnies Café, with plenty of time to watch the race unfold.

Decked in Rapha’s cargo bibs, breathable base layer and technical t-shirt, I was ready to take on the hellish ride. Thankfully the concept of the kit is pretty practical. There are pockets on the side of the bibs, two at the back near the shoulder band.

A quick look at it got me wondering if we are actually going through the local MTB trails. I then looked at my steed to see if it made sense. 28mm tyres were recommended, and I could see mostly everyone was on that. That would work even greater on wider rims. But I was on an old school 19mm rim that only got my 28mm Pirelli Zero to 24mm at most.

We set off with Chris leading the way, and I could feel it getting more and more challenging by the minute. My tyres kept slipping under power; even when I applied even torque.

The bouts of rain the past few days meant that the ground was slippery than usual – which did not help with my situation. The first off-road sections were challenging, and I was already struggling to keep my BTWIN aluminium bike up.

Riding on unfamiliar terrain, I had to push my bike for some parts – despite it being the first section of off-road riding. I was gravely concerned with my image (this would not look good with the chics).

Heading towards Mandai, I let more air out which left my tyres to about 50-60psi. Chris made sure that we regrouped before and after each section. Apart from the event attendees, there were other cyclists on their mountain bike steeds too. I was feeling quite anxious that I can’t keep up and would get in their way.

From this point on, I was pushing the bike more than I was cycling on it. Not that it was physically hard, but it was just too technical – to the point where I said to myself, “Why the hell did I put myself in this situation.”

Clusters of MTB riders zoomed past me as if I was just standing still. Their huge tyres skipped through the rock and gravel terrain like a gazelle galloping through open land.

Thank God, Hell paused for me near a pitstop at Rail Mall. By this time, a few riders have left due to unfortunate mechanical issues.

Thankfully, Chris briefed that there would only be one last off-road section after the pitstop which gave me (and others – I’m pretty sure) a sigh of relief. That doesn’t mean the pushing stopped though – I was still pushing my bike through some sections.

It came to a point where I ran out of excuses and gave kudos to the those who managed to pull through the sections.

The ride ended at Sarnies Cafe located at Telok Ayer Street. Compulsory drinks were served at the end.

It was a great time for everyone to catch up on the race and mingle with the team.  By the end of it, I was just relieved to have survived A Day In Hell on a BTWIN.

We ended the day with a gift from Rapha – a cool cap as a memorabilia to having survived the hellish ride.

Woohoo! Till the next ride then!

Are there other rides other than this?

Definitely. Rapha Singapore has a monthly Women’s Ride, and the popular festive 500 at the end of the year.